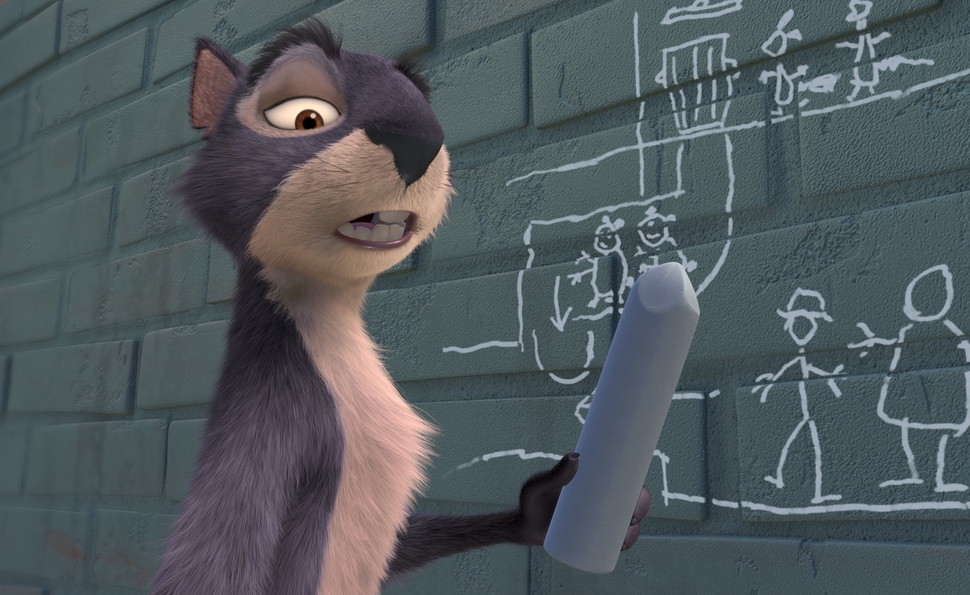 Back in 2005, Canadian TV animator Peter Lepeniotis (Gotta Catch Santa Claus, Bolts & Blip) wrote and directed a 10-minute short film about a selfish squirrel named Surly trying to heist some discarded pizza from a garbage can before his fellow park-dwellers notice and claim their share. The theft, accomplished by Surly and his rat partner Buddy, happens to occur as a couple of masked robbers are sticking up the bank across the street, and the two heists get comically confused and wrapped up in each other.

The Nut Job, an 86-minute feature built on the bones of the same story, showcases how far computer animation has come in eight years, but Lepeniotis’ plotting hasn’t progressed nearly as much. Even at 86 minutes, with plenty of chases and action sequences thrown in, The Nut Job feels overstretched and arbitrary, as if Lepeniotis and his writing partner, Lorne Cameron, weren’t quite sure whether to expand the earlier version into a sophisticated caper, an action drama, or a goofy kids’ cartoon, so they did all three. The characters are conceptually crude and simplistic in a way that’s easily summed up by the fact that a surly squirrel is named “Surly” and his mute best buddy is named “Buddy.” The drama boils down to the fact that Surly (voiced by Will Arnett) hates the other inhabitants of the park where he lives, and doesn’t want to share any food he finds with them, even after his greed accidentally destroys their winter stockpile. Exiled from the park as punishment, he and Buddy hit the motherlode when they discover an entire store full of nuts, presided over by a group of thugs who are planning to rob a nearby bank and replace their stolen sacks of cash with sacks of almonds, cashews, and pistachios, in the hopes that the robbery will go temporarily unnoticed. While the robbers plan to steal the dough, the squirrel-and-rat partnership plans to steal the nuts.

There are a few things wrong with this scenario. One is the mistaken idea that bags of nuts look anything like bags of cash. Another is that the thieves’ plans involve digging a huge tunnel into the bank vault to get access to the money; they apparently think if the vault contains the right number of floppy sacks, the guards will ignore a man-sized hole in the wall. Also, it’s strange that the park is full of starving, nut-obsessed animals who haven’t noticed the nut store that’s clearly adjacent to their home, since both the park and the nut store overlook the bank.

But all of this seems like nit-picking (or nut-picking) over a narrative clearly aimed at small children with short attention spans. To some extent, The Nut Job is attempting to channel Looney Tunes humor, from the goofy sound effects, like an abrupt blare of horns to indicate surprise and dismay, to the cartoon physics, which have various characters getting flattened or incinerated without long-lasting harm. The sheer amount of humor revolving around comic obliviousness feels like a conscious throwback to classic cartoons: The film even builds an entire character, the dim-witted hero squirrel Grayson (Brendan Fraser), out of the gag that none of the park inhabitants notice his constant failures because they’re so primed to think of him as the good guy, and Surly as the jerk.

The weightlessness of the humor could be appealing, if it wasn’t so clumsily modernized with poop and fart jokes and the prominent use of “Gangnam Style,” which gets a big reprise at the end, complete with dancing animated Psy and a wearyingly predictable full-cast dance party over the credits. The gags would also work better if they weren’t awkwardly matched with big drama involving park leader Raccoon (Liam Neeson), who quietly has it in for Surly. The criminals have drama to contend with as well: While the generic flunkies play comic foils and constant victims, their boss King (Stephen Lang) and his estranged moll Lana (Sarah Gadon) seem mired in a sad 1950s crime drama that feels like it would make for much better watching than this film, but that never fits with the tone of the rest of the material.

The Nut Job at least looks much better than the 2005 version: It gives its fuzzy protagonists soft textures instead of hard angles, and pays surprising care to their heaving chests and thumping hearts when they’re in a panic. The design seems a little too familiar, though: Buddy’s design owes a little too much to Remy in Ratatouille, and Surly and his love interest/apologist squirrel Andie (Katherine Heigl) are dead ringers for computerized versions of the squirrels in Disney’s The Sword In The Stone. And looking at the film through the lens of more high-end releases makes it look visually crude and cheap by comparison. There are strong moments here and there throughout The Nut Job: a well-animated, funny angry Girl Scout, Lana’s compelling melancholy, Maya Rudolph’s entire performance as an overeager pug set to guard the nut store. But picking and choosing the worthwhile moments out of this disorganized grab bag of tones, gags, and ideas feels like picking through a cheap assortment of mixed nuts, looking for the occasional pecan among peanuts.