Jesse Eisenberg, Kristen Stewart, and Bruce Willis will star in whatever Woody Allen does in 2016 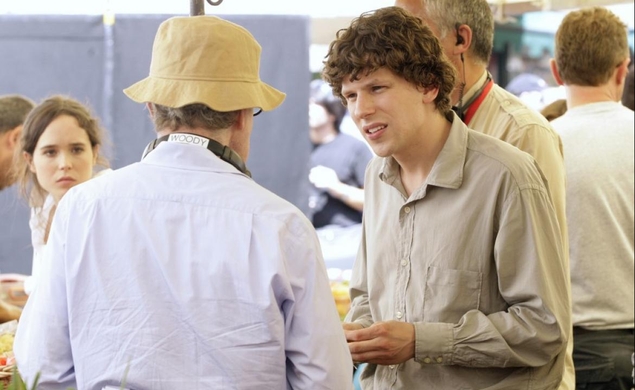 Nothing stops that Woody Allen—not his gradual decline into old age, not the flops scattered across his recent filmography (almost a year out, and the world has already forgotten Magic In The Moonlight), and not the horrific allegations lodged against him by his adopted daughter. Allen has been more prolific than ever as he enters the twilight phase of his career, releasing one movie each year, every year, since 2007. In the most recent year without a new Woody Allen film, Barack Obama was a well-spoken Congressman from Illinois and the iPhone was an outlandish rumor. A social-networking platform created by some nerd from Harvard just opened its e-doors to the public. Even at 79 years old, Allen’s been keeping busy.

The director has already locked in his 2015 offering. Irrational Man stars Joaquin Phoenix and Emma Stone in the most Woody Allen-sounding plot synopsis yet, with all the attendant ickiness that implies: “On a small town college campus, a philosophy professor in existential crisis gives his life new purpose when he enters into a relationship with his student.” Now, I’m no talent agent, but perhaps it’d be a wise move to ease up on the May-December romances, what with the accusations and all. Maybe relegate the transparent lecherousness to the back seat for a couple movies.

Now, the man born Allan Konigsberg has set the wheels in motion on 2016’s installment of the Woody Allen Annual Summer Wish-Fulfillment Extravaganza.

Deadline reports today that Allen has landed three big names for Untitled 2016 Woody Allen Movie, Probably About Jazz Or Academia Or Jewish Guys With Mega-Hot Girlfriends Or Something. Jesse Eisenberg, recently-minted César Award winner Kristen Stewart, and Bruce Willis will headline in the film, which has yet to take on a title or plot details. Eisenberg’s the only repeat Allen collaborator, having previously taken the lead in one of To Rome, With Love’s mini-storylines. Eisenberg and Stewart have previously proven themselves to have a nice simmering chemistry: In 2009’s sleeper hit Adventureland, they convincingly fell in love as wage-slave off-brand carnies.

Hopefully, this one will be more Blue Jasmine, less You Will Meet A Tall Dark Stranger.