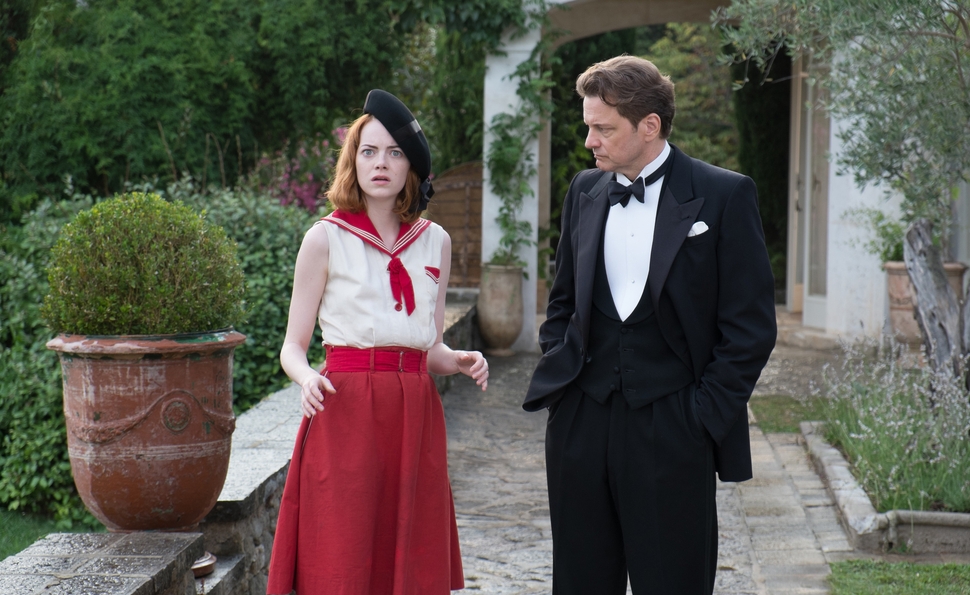 Magic In The Moonlight

Woody Allen’s movies treat magic pragmatically. The shape-changing in Zelig, the movie character stepping off the screen in The Purple Rose Of Cairo to romance Mia Farrow’s Cecilia, the love potion and invisibility herbs in Alice, the time travel in Midnight In Paris: They’re all accomplished without any flash, pomp, or drama. Characters in Allen films readily fall into acknowledged fantasies where they listen to a Greek chorus describe their lives, or pull Marshall McLuhan out of nowhere to chide a loud blowhard publicly holding forth about McLuhan’s work. And they don’t treat real-world magic much differently from the way they treat these daydreams: When the ghost of an investigative reporter turns up to push a young journalism student into solving his murder in Scoop, or a stage magician hypnotizes volunteers into committing crimes for him in The Curse Of The Jade Scorpion, the protagonists don’t waste much time on “This isn’t possible!” Allen’s approach is usually too light for serious investigation into the supernatural. He presents his plot devices without comment, then digs into the stories they enable.

That’s the primary reason his latest, Magic In The Moonlight, has a chance at keeping audience members guessing. When two characters face off over the existence of the supernatural, in a debate with much larger implications than whether a series of possible parlor tricks are actually psychic phenomena, there’s no obvious right answer. Allen’s history suggests he could be working toward exposing the spirit world as a fraud, or having his characters stroll directly into the afterlife together. The film is at its strongest when this uncertainty prevails, and anything is possible. For a while, the movie is similarly open-ended: Early on, it feels like it might become one of Allen’s best. Then the narrative direction becomes clear, the possibilities narrow, and the film shuts down along with them.

Magic In The Moonlight opens in 1928, when stage magician Stanley Crawford (Colin Firth, sounding uncannily like John Cleese at his most expansive) is taking advantage of the Orientalism craze by performing as Chinese master Wei Ling Soo, in Mandarin robes, a Fu Manchu mustache, and exaggerated makeup. Stanley’s a smug, self-satisfied gimmick artist with no belief in magic or the supernatural; in an era besotted with spiritualism and séances, he enjoys uncovering the frauds who are taking financial advantage of gullible victims. So when his old friend Howard (Simon McBurney) invites him to a fine home on the French Riviera to check out a successful new medium, Stanley welcomes the chance to expose another faker. Then he meets Sophie (Emma Stone), who seems capable of reading his mind and calling on spirits, and his certainty falters. But believing in the sincere-seeming Sophie might mean opening up his worldview to anything, from God to ghosts.

For much of its length, Magic In The Moonlight feels like an exquisitely shot costume drama set at a high-spirited, long-running party. Beautiful scenery, elaborate staging, and Sonia Grande’s crisp 1920s costumes keep the screen busy with color and detail. Cinematographer Darius Khondji, DP on a variety of visually distinctive films from Seven to Funny Games to Midnight In Paris, gives the whole film a rosy glow that suggests just how breezy and easy life was for the casual rich in this pre-Depression moment. For Stanley, the question of whether Sophie is just another fake is monumental, edging into the big questions about the purpose of life and the existence of the soul. But Allen still scripts and shoots the film with a tonal lightness that suggests these questions aren’t ultimately much more important than a debate over what kind of berries to have with breakfast; for everyone but Stanley, they’re a welcome diversion from tedium, but not much more.

Stone complicates the issue somewhat with a performance that edges just a little into camp: The effects she produces, and the things she mysteriously knows about Stanley, suggest her powers might be real, but the broad, performative way she clasps her head and intones her revelations is strictly theatrical flimflammery, in a way that implies she and Allen are snickering at the audience. Firth is charming and dapper as ever in his role as a smirking know-it-all, and he complicates the matter a bit himself, by pulling viewers in with his charisma, and pushing them away with his obnoxious attitude. It’s a war of personalities as much as approaches to the supernatural.

Unfortunately, smarm takes over the film. Much as Allen’s previous film, Blue Jasmine, took its characters and conflicts directly from A Streetcar Named Desire, Magic In The Moonlight rapidly devolves into My Fair Lady. Sophie is never an unsophisticated rube that Stanley takes in and polishes on a bet, but like Henry Higgins, he does make a point both of magnanimously taking her under his wing and of strenuously belittling and patronizing her. Meanwhile, like Eliza Doolittle, Sophie operates successfully on her own strengths, while still developing an increasingly unlikely and annoying attachment to her would-be Svengali. She even has her own banal, love-struck version of Freddy Eynsford-Hill, in the form of wealthy, besotted Brice (Hamish Linklater), who wants nothing more than to spirit her away to a life of yacht outings and world travel. Cinephiles who recognize the pattern won’t be surprised at where the story goes. (See The Reveal for more.)

Before Magic In The Moonlight heads in that direction, it’s pleasantly airy and brisk, with enough mystery in the central science-vs.-spirituality question to keep the whole story from being bland froth. But the question is more compelling than the answer, and the film’s early possibilities are more intriguing than the eventual bleak, poisonous direction the film takes. The French Riviera comes across as a magical place, and the 1920s as a magical era, with plenty of opportunities for romance, surprises, a curmudgeon who’d given up on learning new things, and a girl getting by on beauty and the venal pushiness of a determined stage mother. (Marcia Gay Harden, enjoyable but underused.) But Magic In The Moonlight ultimately sets its gains aside to take a cynical path that seems just as lightweight and straightforward as the rest of the film. Allen has never previously shaped his films as if he’s bowled over by otherworldly options, and there’s no reason he should start now. But after he opens up such broad possibilities—and with them, one character’s previously closed mind—it feels like a sour defeat when he narrows all the options down to one.