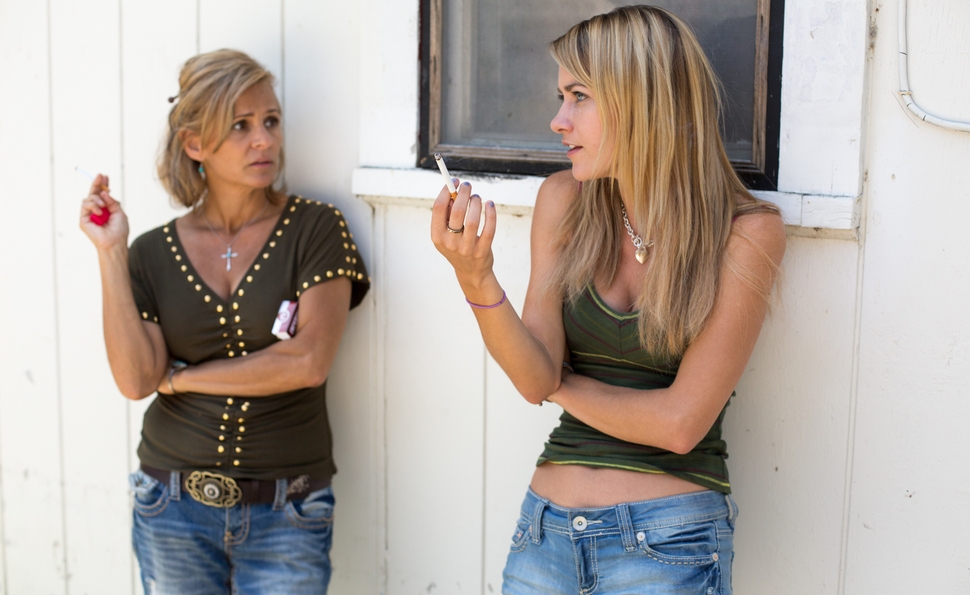 As someone whose sense of humor was shaped by Mr. Show, I could not have been more disappointed with Hits, David Cross’ debut as a writer-director. A misfiring satire, Hits is a misguided venture in part because it bears such an unfortunate resemblance to Run Ronnie Run, the not-so-beloved Mr. Show direct-to-video feature film, both thematically and tonally. Both films find a deluded, faux-worldly sophisticate adopting an ignorant rube as an exemplar of working-class dignity, or at the very least, his meal ticket up the social ladder. Run Ronnie Run ran Cross’ small-town yokel Ronnie Dobbs—a man whose greatest and only gift involves getting arrested in flamboyant ways—through the star-making machinery at the hands of a pretentious British fop played by Bob Odenkirk. Hits similarly has a mustachioed Brooklyn hipster played by James Adomian stumble across footage of small-town Upstate New York crank Dave Stuben (Matt Walsh) loudly complaining at city council meetings and decides to co-opt and exploit him as a heroic working-class icon speaking truth to power in the face of glowering oppression.

The deluded progressive and his band of oblivious leftists set out to elevate Stuben to national prominence without bothering to learn anything about him or his actual political beliefs. Meanwhile, Stuben’s dim-witted, sexpot 19-year-old daughter Katelyn (Meredith Hagner) dreams of making it onto The Voice and being interviewed by Ellen Degeneres, despite a complete dearth of musical talent. She’s a cross between Nicole Kidman in To Die For and Rupert Pupkin in The King Of Comedy—right down to pretending to hold elaborate, lengthy conversations with famous talk-show hosts—without the depth of either character. She’ll stop at nothing to make it, including giving in to the boorish sexual demands of a scuzzy self-styled recording engineer played by Jason Ritter.

Hits alternates between equally tired jabs at self-righteous hipsters, small-town rubes, and show-business wannabes. It would be hard to imagine three more exhausted satirical subjects, and the film ultimately doesn’t have much to say except that everyone wants to be famous, regardless of the nature or legitimacy of that fame. In a bid for contemporary resonance, that lust for fame untethered from merit or meaning takes the form of a search for YouTube hits, a move that already feels a little dated. If a film has such contempt for its characters, as Hits clearly does, it should at least be a little bit funny. Yet Hits is sour, caustic, and mean without ever being amusing, and a King Of Comedy-style ending only makes the film seem inferior by comparison. Hits might set out to unsparingly and viciously critique the emptiness and stupidity of pop culture, but it only ends up contributing to it.

In the aptly named The Skeleton Twins, Saturday Night Live’s Bill Hader makes an impressive leading man as Milo, a suicidal gay actor who, after a long period of estrangement, uneasily reconciles with his similarly depressed sister Maggie (fellow Saturday Night Live veteran Kristen Wiig) following her own unsuccessful suicide attempt. The film is an appropriately morose effort about a pair of siblings doomed to lives of quiet and not-so-quiet desperation in the lingering shadow of their father’s suicide, the sexual molestation Hader experienced as a teenager at the hands of a teacher played by Ty Burrell, and their own inability to keep themselves from making self-destructive decisions.

Maggie has a lovely, empathetic husband in Lance (Luke Wilson), a big-hearted golden retriever of a human being, but that doesn’t keep her from cheating on him habitually with a series of adult-education instructors. Like the similarly grim Listen Up Philip, The Skeleton Twins is uncompromising in a way that’s both admirable and off-putting. As befits a film about suicide, The Skeleton Twins exists entirely inside a depressive autumnal haze leavened only slightly by Milo’s lacerating wit, which he wields like a weapon, albeit usually against himself. Perhaps because they’ve been working together so long, Wiig and Hader have terrific chemistry. They’re utterly convincing as siblings far too similar in personality and disposition to get along for any extended length of time. It’s a fully lived-in character study of two shattered depressives whose company audiences could be forgiven for not wanting to share for too long.

Inappropriate teacher/student relationships are also at the core of Captivated: The Trials Of Pamela Smart, a muckraking exposé (if you want to rake some muck via an impassioned documentary, Sundance is the place to do it) that goes a long way toward rehabilitating the image of Pamela Smart, the notorious teacher convicted of having juvenile delinquents murder her husband. Smart was having a sexual affair with one of the boys, 15-year-old William “Billy” Flynn, and was convicted in the proverbial court of public opinion well before a jury could render its verdict. Smart made for a terrific story: the sexy black widow hypnotizing an impressionable young man into doing her murderous bidding. In the early 1990s, the story captured the imagination not just of a media that fell all over itself to chronicle it in the most lurid, sensationalistic manner possible, but also novelist Joyce Maynard, who used it as the basis for To Die For (which was later turned into a cult film by director Gus Van Sant and screenwriter Buck Henry) and CBS, which turned it into a television movie called Murder In New Hampshire: The Pamela Wojas Smart Story, starring Helen Hunt as Smart. A taste of the tone of the coverage of the case is provided from the titles of two books about Smart: Teach Me To Kill and Deadly Lessons.

Smart admitted to having a relationship with a 15-year-old juvenile delinquent, so it wasn’t too much of a leap for people to assume that if she transgressed a boundary that severe, murder might naturally be the next step. She sure seemed guilty, but Captivated compellingly argues that Smart was railroaded by a system more interested in delivering her head on a platter and serving up a salacious story than in uncovering the truth. The evidence for Smart’s involvement was weak and the evidence for the boys acting of their own initiative much stronger, but the justice system was stacked against Smart from the start. Even the ostensible smoking gun in the case—audiotapes of Smart seemingly owning up to her part in the murder—are cryptic, enigmatic, and incomplete. Like the Penn State documentary Happy Valley, Captivated is an indictment of an entire system more interested in serving its own needs than in doling out justice. 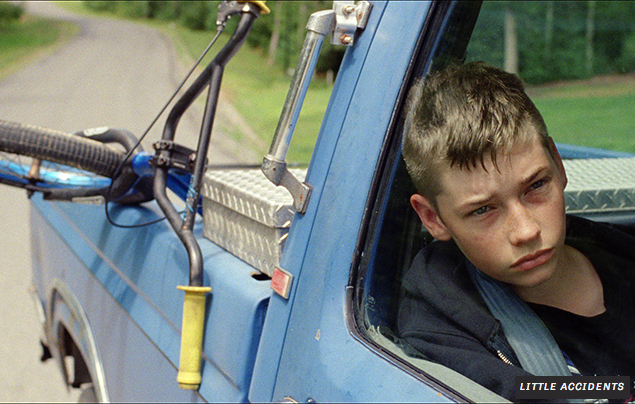 When people deride Sundance as a festival for dreary, social-issue dramas doomed to die unmourned deaths outside the nurturing warmth of the festival, they are referring to movies like Little Accidents. The film’s description in the Sundance catalog (“When a mining disaster tears at the fabric of an Appalachian coal-mining town, the lives of three very different inhabitants become inexplicably tangled in a web of secrets”) makes it seem singularly unappealing. Reduced to its broad outlines, it almost sounds like a parody of a Sundance movie, but there’s nothing funny about Little Accidents. Economically depressed small town clinging to a dying profession? Check. Glamorous movie stars eschewing make-up and non-dowdy clothes for the sake of art? Check. Dour, portentous tone that doesn’t allow for an iota of humor or irreverence? Check. Interlocking “circle of pain” narrative a la Crash, Amores Perros, and their imitators? Check.

The film stars a de-glammed Elizabeth Banks as Diane, the depressed wife of middle manager Bill Doyle (Josh Lucas), who comes under fire after a mining accident leaves many of his workers dead and a surviving miner Amos Jenkins (Boyd Holbrook) with a difficult decision: whether to speak out against the dangerous working conditions of the mine and putting his colleagues out of work, or to keep his mouth shut for the sake of appearances. Meanwhile, Amos’ son accidentally kills Diane’s teenaged son, and Amos and Diane embark on an affair that transgresses class lines as these two wounded, haunted souls madly seek comfort in each other. I watched Little Accidents by accident, appropriately enough, mistaking it for another film. About two minutes in, I realized my mistake, but by then it was too late and I was locked into a dreary slog of a melodrama that’s all good intentions and stumbling earnestness in service of a story not worth telling. 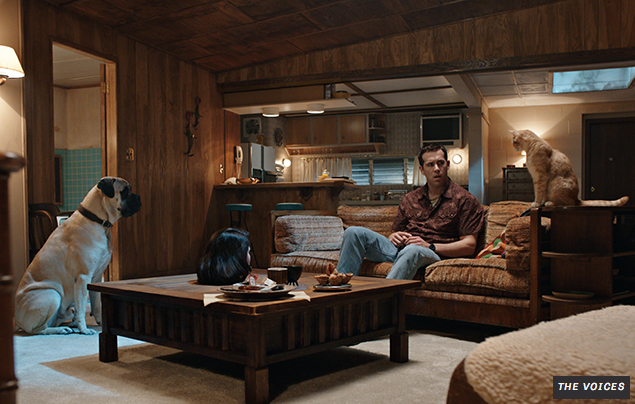 The Voices was one of the most buzzed-about movies at Sundance and for good reason. It’s not every day Marjane Satrapi, the acclaimed artist behind the graphic novel Persepolis and its Oscar-nominated film adaptation, makes a deeply nutty cult comedy in which Ryan Reynolds plays a tormented man driven to kill by his psychotic talking cat. Early in the film a zaftig woman at karaoke performs an enthusiastic, if not terribly convincing, rendition of Ol’ Dirty Bastard’s “Shimmy Shimmy Ya” with its telling lyric, “I get psycho killer, Norman Bates.” The Voices is perhaps best understood as a demented riff on Alfred Hitchcock’s classic 1960 shocker that similarly torments a sympathetic serial killer with demonic, sinister voices urging him to kill, this time in the form of both his evil talking cat and the disembodied head of a beautiful co-worker he killed by accident. Or did he? A man who holds lengthy conversations with his friendly dog and psychotic cat and the disembodied heads of the people he kills while off his medication cannot be trusted as an objective observer, even of his own state of mind. The Voices plunges audiences deep inside its protagonist’s tormented brain, a sometimes wondrous and often horrifying and confusing place to be.

In an assured directorial turn, Satrapi gives the film the candy-colored vivacity of a live-action cartoon and sinister quirk of the Coen brothers, but the film’s dark comedy would curdle without the scary conviction Reynolds brings to the lead role, a sort of chipper psychosis and unhinged sweetness. A long way from the smirky glibness of his Van Wilder days, Reynolds invests the character with vulnerability and pathos, particularly in his relationship with a beautiful, charming co-worker played by Anna Kendrick who might just represent his last, best chance for happiness.

A Sundance festival could not survive solely on movies like The Voices. I wouldn’t want it to, but thank God there is a place for a movie this charmingly deranged at a festival this classy. Filmgoers cannot survive on Little Accidents alone, and The Voices is a stirring reminder that a movie doesn’t have to feel like homework or a dreary obligation to have a home at Sundance.