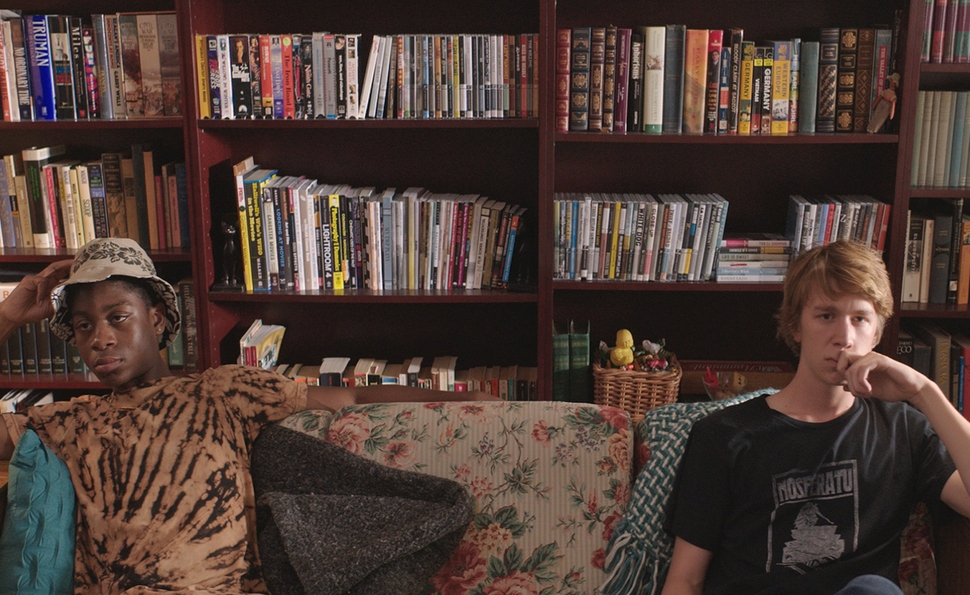 Before Sundance started, I didn’t have much interest in seeing Me & Earl & The Dying Girl because the catalog description made it sound like everything I don’t want at Sundance:

“Greg Gaines (Thomas Mann) is an awkward, self-deprecating high school student determined to coast through his senior year as anonymously as possible. Avoiding social interactions like the plague, Greg spends most of his time remaking wacky versions of classic movies with his only friend, Earl (Ronald Cyler II). Greg’s well-meaning mother intervenes, forcing him to befriend Rachel (Olivia Cooke), a classmate who’s been diagnosed with leukemia.”

When I heard that my Dissolve partner Mike had walked out of the movie after 30 minutes of the press screening, I wasn’t that surprised. But then I started seeing tweets about the movie that were nothing short of raves, which—coupled with Fox Searchlight’s pricey payout for the distribution rights—made Me & Earl into something I had to see before the end of the fest.

So I did. And I have to say: I’m more or less with Mike on this one.

I’m not a contrarian by nature. If a lot of people enjoy something, I tend to give it a huge benefit of the doubt—especially at a festival, where I find my colleagues too often hear that a movie is getting buzz and immediate start looking for angles of attack. (This week at Sundance, early excitement over Dope is starting to meet with some challenges, after Wesley Morris at Grantland leveled the movie in one of his dispatches from Park City.) That said: So much about Me & Earl & The Dying Girl rubbed me the wrong way that I’ve been examining my reactions closely, trying to make sure that this well-meaning, cinephile-friendly cancer dramedy didn’t just catch me in a bad mood.

It’s easy to nitpick Me & Earl & The Dying Girl. Start with Earl, who’s not really a character so much as a construct: the foul-mouthed black friend who dispatches sage advice but doesn’t really seem to have a life outside of whatever he does for Greg. Rachel too barely seems to have her own interests and desires, beyond the willingness to be Greg’s companion. Meanwhile, Greg and Earl’s little movies are both preposterously elaborate and a shameless sop to film buffs; and director Alfonso Gomez-Rejon’s camera moves are often distractingly showy.

Those are all elements that in another context I could ignore or enjoy. The overarching problem I have with Me & Earl is with Greg, who according to the film needs only to get over his lack of ambition and his self-deprecation, when really, he should stop being so self-centered. Greg’s apparent lack of interest in Earl’s and Rachel’s lives is a character flaw I kept waiting to be exposed. Instead, this movie is obstinately self-congratulatory: a reassurance to all the high school kids that someday their secret genius will be recognized by their peers.

I don’t want to be too negative, because there’s a lot to like about Me & Earl. Gomez-Recon constructs some beautiful sequences (a time-lapse POV shot of Greg visiting an increasingly ill Rachel is a particular gem) and he and screenwriter Jess Andrews refreshingly embrace the teenage fantasy. In addition to the overall “quiet boy gets his due” idea, Greg shops at a store that’s the kind of a place any young pop-culture-addicted geek would love: stocked with the coolest comics and movie memorabilia. The movie as a whole just struck me as over-cranked though, from Greg’s meticulous cataloging of the various high school social groups (a teenflick cliché that should’ve died decades ago) to his aggressively playful voice-over narration.

I’ll be very curious to see how the movie does when Fox Searchlight releases it. I suspect it’ll be loved by many. I also suspect that some critics will be waiting to pick it apart. I fear the same fate may be in store for my beloved Brooklyn, a very nice movie that more than a few major critics are bound to greet with a shrug (and maybe with a full-on backlash if the film ever enters the awards race).

At least Brooklyn doesn’t feel like “a Sundance movie” though, in the way that Me & Earl & The Dying Girl does. It’s lusher, and more polished. As the fest winds down and I look back over the entire week, my sense is that this Sundance was good overall, though not as good as last year; and one of the reasons for that is that this year was overloaded with “Sundance movies.” I saw a lot of films of modest ambition, unwilling to challenge audiences to feel anything more complicated than mild amusement, capped by a good, cleansing cry.

Even the harder-edged films felt safe in their way. For example: I Smile Back, director Adam Salky’s adaptation of an Amy Koppelman novel, starring Sarah Silverman as an upper-class housewife and mother whose struggles with depression and addiction keep flaring up just when she’s sure she’s back on the right track. Silverman commits and gives a gutsy performance, but this is more a case-study than movie. It’s like all the flashback scenes from Wild strung together, with no real plot to shape or focus the long wallow in one woman’s degradation. It punishes the audience, but it doesn’t really show them anything surprising, outside of a comic actress getting serious.

In the context of breezy teen cancer movies and miserable star vehicles, it’s easy to overreact—both positively and negatively—to a film as singularly eccentric as The Comedy writer-director Rick Alveron’s new film Entertainment. Real-life comedian Greg Turkington stars as a depressed, possibly alcoholic stand-up comic who spends most of the 104-minute movie quietly enduring various existential/absurdist miseries while driving from one under-attended gig to another in the California desert. Turkington is hilarious whenever he’s doing his act, in his sweaty, halting, tasteless “Neil Hamburger” persona. (Sample joke: “What’s the worst thing about being gang-raped by Crosby, Stills, and Nash? No Young.”) But most of the movie is pointedly unfunny, showing one meek man mired in a misery that seems unlikely to subside.

I saw Entertainment back on my second full day at the festival, but but I held off writing about it, in hopes that it’d grow in my memory, and become the film that so many of my colleagues up here loved. Ultimately, I admired Alverson’s audience-testing indulgences more than I actively enjoyed them. I never felt any cumulative emotional or aesthetic effect from all the monochrome melancholy.

That said, when I think back over Entertainment, my mind wanders to a lot of new places, as opposed to the much narrower, familiar paths that Me & Earl and I Smile Back lead viewers through. I had the opportunity to interview Alverson, and to listen to some of his ideas about formalism in cinema. At one point I asked him whether he found Neil Hamburger’s jokes funny, and he said he thought that some were, but that “funny” wasn’t really the point. In that sense, he and I might not be on the same wavelength, at least when it comes to Entertainment. But there’s still a lot more to contemplate and even to push against productively in this movie than there is in what may be Sundance’s most popular film this year. It just seems pointless, and maybe a little mean, to push against The Dying Girl.

Also seen: I’m not going to write much about Kirby Dick’s latest documentary The Hunting Ground (co-created with Amy Ziering) because a cousin of mine worked on the film. I will say though that this comprehensive-yet-personal study of campus rape is a powerful follow-up to Dick’s film The Invisible War, which was about rape in the military. From the opening montage of happy high school kids cheering their acceptance letters and e-mails, The Hunting Ground effectively defines the stakes here. All these teens want to do is get an education, make friends, and have fun; but after one bad night they find themselves in a counselor’s office, answering questions like, “Looking back, what would you do differently?”

My blood continued to boil watching Welcome To Leith, a documentary about a small North Dakota town that a group of white supremacists moved to and tried to covert into a new Aryan homeland. The film’s not just intended to get the viewer worked into a lather over the neo-Nazis’ brazen racism and bullying tactics, though. Directors Michael Beach Nichols and Christopher K. Walker subtly ask where the real power lies here—in well-funded institutions like the Southern Poverty Law Center or in a few wackos who live in crummy trailers with no water hook-ups—and he asks whether bigots too have a right to a home and free speech. What’s most exciting about Welcome To Leith is about a 15-minute stretch in the middle when Nichols and Walker ditch the talking-heads/fly-on-the-wall format and instead use footage that both the Leith residents and the Nazis shot of each other, each hoping to provoke the other into a confrontation that they can then “expose” on social media. Such is the state of political debate in the 2010s.

During my final two days at Sundance I caught up with a couple of films that Mike has already covered (but which I wanted to see anyway because of the people involved and/or the buzz). I liked Andrew Bujalski’s Results more than Mike, though I’m not as wild about it as some of our other friends here. It’s too slack for a comedy, and Guy Pearce’s and Cobie Smulders’  acting styles don’t always fit with Bujalski’s sensibility—or with Kevin Corrigan, who plays the third prong in the movies’ bent love triangle. But Corrigan’s very funny doing his half-Walken/half-Brando schtick, and it’s fun to watch two people as fit and attractive as Pearce and Smulders fumble towards a connection. (Also, there’s a scene where Pearce’s character jogs while listening to Split Enz’s “Six Months In A Leaky Boat,” and I’d like to imagine that was his idea.)

Lastly, I ended my fest with a movie that a lot people caught at the beginning: Robert Eggers’ The Witch, about the horrors that beset a 17th century colonial family. This time I can go along with the crowd: The Witch is spooky, strange, and beautiful to look at, right up the scenes where all hell breaks loose. Plus: There’s an evil goat. That’s exactly what my Sundance had been missing.

Tomorrow: Mike D’Angelo brings our Sundance coverage to a close with looks at new films by Guy Maddin and Rodney Ascher.