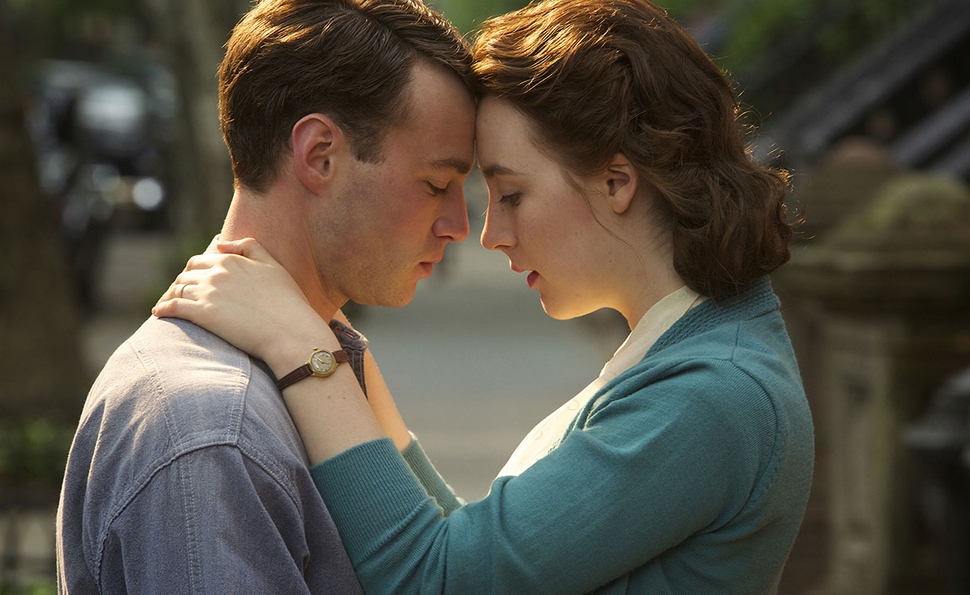 We haven’t talked about the business side of this year’s Sundance in our daily Dissolve wrap-ups, but it has been an unusually active year for acquisitions, probably because so many of the movies for sale are crowd-pleasers. The End Of The Tour went early to A24, Dope sold for big money to Open Road, and Me And Earl And The Dying Girl (which I’ll be seeing later this week) set a record with its Fox Searchlight distribution deal. And as I write these words, a bidding war is apparently underway for director John Crowley and screenwriter Nick Hornby’s adaptation of Colm Tóibin’s beloved 2009 historical novel Brooklyn, which met with a rapturous reception at its premiere Monday night.

Between Brooklyn and last year’s Wild, I’m about ready to call Hornby the best current screen adapter of tricky bestsellers. Intermission/Boy A helmer Crowley and cinematographer Yves Bélanger (who shot Wild) are largely responsible for how sumptuous the movie looks. They bring a soft brightness and lovely pastel colors to both the small Irish town where the story begins—where a meek shopgirl named Eilis (Saoirse Ronan) is overshadowed by her more popular friends and sister—and the 1950s New York where much of it takes place. But Hornby’s script also carries a lot of the load here, keeping the audience’s spirits up with witty dialogue before the real drama kicks in, at about the halfway point. Aside from a contrived, overly melodramatic plot twist in the last act (taken directly from the book, from what I understand), the story doesn’t push toward any big revelations, or try to win sympathy for Eilis by surounding her with enemies. Instead, it focuses on the young woman’s shifting fortunes as she immigrates to America, where she endures crushing homesickness until she meets a fella, at which point she develops a new confidence that she carries with her on a return visit to Ireland.

After the screening, I heard some friends who love the book say that the movie sweetens Tóibin’s more pungent realism; and I can’t deny that the film is, first and foremost, a pleasure. It’s a sunnier spin on The Immigrant, and the kind of arthouse picture that cinephiles can unreservedly recommend to their parents. But it’s hardly broad or pandering. Brooklyn is easy on the eyes and aimed at the heart, but it’s also a smart study of a woman who’d become accustomed to accepting whatever scraps are given to her, until she becomes an American and discovers the power of choice.

To be fair, it’s possible that I was so enchanted by Brooklyn because I saw it immediately after enduring two grueling hours of The Stanford Prison Experiment. Writer Tim Talbott and director Kyle Patrick Alvarez have turned one of academia’s most famous and controversial psychological studies into an effective actors’ showcase, bringing together a dozen fine young thespians to play 1970s college students, signed on to play-act as prisoners and guards for Dr. Philip Zimbardo (Billy Crudup). But the results of Zimbardo’s experiment are so well known that the reenactments here of “guards” becoming increasingly abusive to easily cowed “prisoners” aren’t really instructive. They’re predictable, and a little tedious after a while. It doesn’t help that all the actors are stuck in 1970s drag—all bushy wigs and facial hair, making the movie seem more phony—or that this true story has been fictionalized so many times before. Talbott and Alvarez don’t bring any special zing or slant to their version.

For a more disturbing and ultimately moving look at an experiment gone awry, I give the advantage to Crystal Moselle’s documentary The Wolfpack, and by a large margin. Moselle’s subjects are the Angulo brothers: a group of kids in their teens and 20s who’ve spent nearly every waking minute of their childhood in a crummy apartment in the crime-ridden New York projects, raised by their domineering Hare Krishna father and their overprotective mother, who wouldn’t let them leave. Moselle began filming the Angulos once their circumstances had changed, after one of the brothers started standing up to their dad and demanding that they be allowed to go on outings around the city. But The Wolfpack also has plenty of video footage of the boys’ younger years, because their main hobby during their forced isolation was to watch movies like Reservoir Dogs and The Dark Knight Rises and then recreate them with a video camera and hand-made props, inside their bedrooms.

The Angulos’ cinemania is The Wolfpack’s initial hook, but it’s not really what the movie is about. Nor does the documentary answer a lot of questions about the nature of this patriarch’s oppressive hold on his children, or how the boys are doing now that they’ve been branching out on their own, or even how Moselle found this family in the first place. The film is structured more as a metaphor for parenting in general, arguing that mothers and fathers have to let their kids grow up and engage with the world, however dangerous it may seem. Cinema gave the Angulos another window to peer through, but ultimately, they had to to develop the will to walk through their front door.

Also seen: Over the past couple of days, I’ve seen a couple of movies that looked like they could've been made by the kids in The Wolfpack. Turbo Kid is a pastiche of 1980s VHS favorites, starring Munro Chambers as a BMX-riding teen who travels with an air-headed android girl through the decimated future-Earth of 1997(!), using his blaster-bracelet to ward off a band of marauders led by Michael Ironside. (Technically it’s a character played by Michael Ironside. But c’mon.) The plot dead-ends into an overextended outdoor fight sequence, but for almost an hour, the film gets the visual and aural texture of 1980s B-movies just right, while adding a layer of self-awareness. Writer-director John Maclean’s Slow West, meanwhile, is affected and precious to a fault in its first hour, forcing a fable-like frame around a classic western plot, about a good-hearted outlaw (Michael Fassbender) who helps an overwhelmed tenderfoot (Kodi Smit-McPhee) complete a dangerous cross-country quest. The last 20 minutes or so of Slow West though represent some top-shelf genre filmmaking by Maclean, who constructs one of the best gunfight sequences I’ve ever seen in a western, capped by a fantastic sick joke that had the audience howling at the press screening.

I’ve also had the chance over the past couple of days to catch up with some of the movies that Mike’s already seen, and I disagree with him on a couple of them. For example, I liked Z For Zachariah a lot more than he did. Though I agree that it’s not always dramatically effective to shoehorn a love triangle into the story of two people trying to rebuild society post-apocalypse, I found the movie appealingly reflective in the way the best speculative fiction can be, focusing on both the particulars of survival and the larger philosophical questions about what it means to live with other people. I also got a lot out of Mistress America, which brings back the hopefulness of Noah Baumbach and Greta Gerwig’s Frances Ha, without the sour turns and forced plottiness of the as-yet-unreleased While We're Young. It’s a little uneven—the first half’s like a vibrant short film, the second’s like a fast-paced drawing-room farce—but it’s funny throughout, and has something meaningful to say about how a young writer matures once she learns to love her characters and not to judge them. Finally, I can back Mike on Dope, which is overstuffed with plot and ideas, but which for long, sustained stretches is fizzy and fun, without losing its awareness of how a underclass coming-of-age story in 2015 differs from a middle-class or upper-class coming-of-age story in other eras.