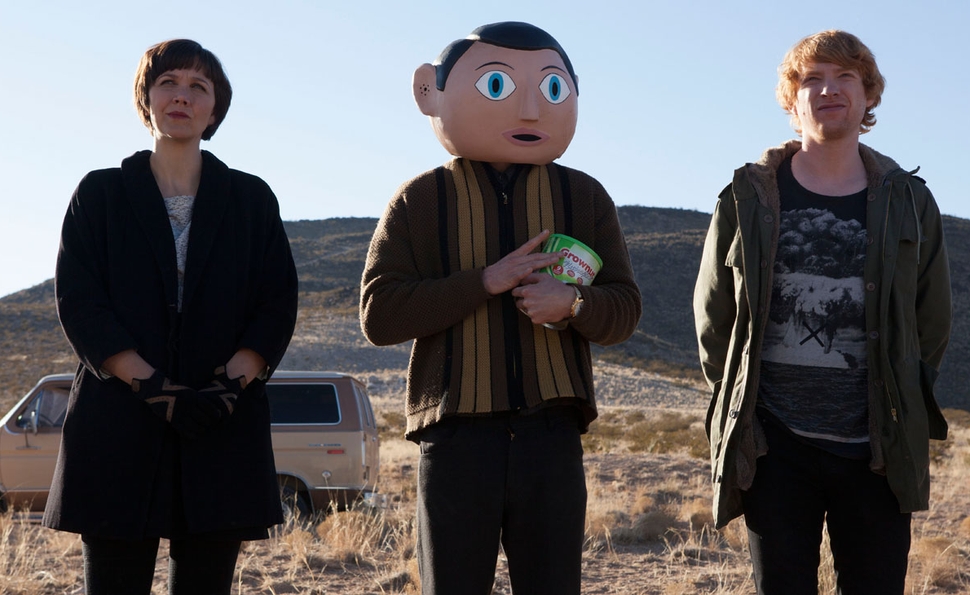 Joseph Gordon-Levitt is a dynamo: part cheerleader, part self-help guru, part old-timey song-and-dance man. When he stepped out in front of the screen at the Park City Library two nights ago, the crowd went nuts, snapping pictures and shooting video. And JGL sent that love right back, encouraging the crowd to get the maximum amount of joy out of life by being creative, and forming communities. Before he showed the first three episodes of his new Pivot series HitRecord On TV, Joe—he likes to be called Joe—explained that the ethos behind the whole HitRecord project has always been to celebrate people who “love doing what they do, and love doing it together.” It was a rousing speech. But I have to admit that my first thought on seeing the Looper star walk out of the wings was, “Wait… what the hell is Joseph Gordon-Levitt doing here?”

I had no intention of seeing HitRecord On TV. Nothing against the show—I enjoyed what Gordon-Levitt showed at the Library, which looked like a crowd-sourced This American Life, complete with cartoons and musical numbers—but I tend to like my television on television, and my film festival schedules filled with, well, films. I only ended up at this event because I got my libraries confused, and thought I was going to be seeing the Tom Hardy vehicle Locke, which was actually playing in Salt Lake City. Still, I’m glad I heard Gordon-Levitt speak, and his theory that we should all be making art all the time has stuck with me over the past two days, mainly because it runs directly counter to the movies I’ve been seeing.

If you follow the buzz coming out of Sundance, you’re probably already aware of Frank. Directed by Lenny Abrahamson and written by Peter Straughan and Jon Ronson—based on a fictionalized memoir by the latter—Frank stars Domhnall Gleeson as an amateur singer-songwriter named Jon, who stumbles into a gig playing keyboards with the itinerant art-rock band The Soronprfbs [sic], fronted by an eccentric visionary named Frank (Michael Fassbender), who goes around at all times wearing a giant papier-mâché head. (When Jon asks how Frank shaves, eats, and washes, the band’s manager urges him to “just go with it.”) Jon, a social-media-savvy dreamer with money to lend, helps fund the band’s yearlong recording session in the wilderness, and documents it on YouTube and Twitter, building a cult following for Frank that leads to a showcase at SXSW. And there, everything goes awry.

Though I’ve never seen anything like Frank, I’m not quite as gung-ho on it as some of my colleagues. Early on, Abrahamson establishes a dynamic—with Jon naïvely trying to push the band toward popularity, and getting treated as a malicious usurper by everyone but Frank—and that basic scenario repeats for 90 minutes, in different locations. But the film is frequently funny and unexpectedly sad, especially as it becomes clearer that Frank’s kind of crazy isn’t the Silver Linings Playbook kind, which can be danced away in the third act. More to the point, I was impressed with how unforgiving Frank is toward its protagonist. Early in the film, when Jon gets on the stage for the first time with The Soronprfbs, his pleasure in sharing a spontaneous musical moment with strangers is infectious. But the truth is that he’s a mediocre musician, whose fundamental lack of understanding of Frank’s art is as destructive as his bandmates suggest. That’s a ballsy lesson for a movie to impart after starting out so twee: that some people are better off in the audience, not on the stage.

There’s a simpatico vibe to Tim Sutton’s Memphis, which suggests that genuine artistry is a gift from God—not granted to everyone, and easily yanked away. Partially a meditation on creative block, the film follows real-life alt-R&B singer-songwriter Willis Earl Beal as he futzes around in the title city, seeking inspiration. I was a fan of Sutton’s lyrical, likably aimless debut feature Pavilion, and while I can’t call Memphis a step down in quality—because it’s similar in style, and similarly assured—it does reach toward something it can’t quite grasp. Sutton mostly just turns the camera on Beal and lets him goof around, in ways that very much feel staged and not “natural.” The movie is the most aggravating kind of sloppy: the kind where every go-nowhere moment and failed experiment can be explained away as part of the artistic process. That said, Memphis is certainly memorable, and fleetingly true and beautiful. After about the 20th shot of kids riding around on bicycles (a motif in Pavilion as well), I started thinking about how easily the very young can improvise, to no set end, and the more I dwelled on that, the more Beal’s inability to get back in that zone became a real predicament.

I was even more moved by Blind, which in its own weird way is another movie about the creative process—albeit one less judgmental than Frank or Memphis. Ellen Dorrit Petersen plays a married, childless Oslo resident named Ingrid, who’s coping with having lost her sight a few years earlier. Stuck in her apartment all day, Ingrid makes up stories about the sexual desires of the lonely, inspired in part by the noises she hears. She also writes her husband into these stories, imagining him as much more adventurous than he actually is. Writer-director Eskil Vogt (making his directorial debut after co-writing Reprise and Oslo, August 31st, with Joachim Trier) films Ingrid’s fictions as though they’re actually happening around her, and it takes a few scenes for the audience to catch on that much of the movie is happening in Ingrid’s head. Not that Vogt means it to be a surprise, necessarily. He changes details in the stories abruptly, constantly jarring viewers out of Ingrid’s fantasies, while also edging ever-closer to what’s really on Ingrid’s mind.

I was a little disappointed by Blind’s final scene, which is more a crude punchline than the grand summation the movie earns (and deserves). But at least the ending isn't ambiguous—something films like this often lazily settle for—and at least Vogt remains true throughout to the idea that people’s deeper emotional needs are often channeled through their sexual fetishes. And I can’t say enough about the complexity of Blind’s staging and editing, which make it resemble a Charlie Kaufman/Spike Jonze film in the way many scenes occurs in multiple locales at once, with rotating casts and décor, reflecting Ingrid’s inability to keep her story straight. I look forward to re-watching and writing more about this film in the years to come. It’s something special.

Coming full circle from Frank and Memphis, there’s a moment in Stuart Murdoch’s indie-pop musical God Help The Girl where a middling guitarist named James (Olly Alexander) tells the two young women in his band that he believes musical talent is divine, and when Cassie (Hannah Murray) suggests that’s preposterous, the movie’s heroine Eve (Emily Browning) sides with James. Eve is one of those people who believes anything can be an inspiration for a pop song, and one of the main selling points of God Help The Girl is that Murdoch’s songs for the film are so unusual, even by the standards of his band Belle & Sebastian. They wind along discursively, describing the action on the screen as Eve and her pals roam through Glasgow, having adventures and chasing their dreams. But all the while, James—more than Eve, even—recognizes that his friend’s knack for spilling her life into perfectly arranged little numbers is something not anyone can do. The best he can hope for is to ride along on her coattails.

Here’s the thing with God Help The Girl: Murdoch is attempting a pastiche of his favorite movies the way he pastiches his favorite pop songs in Belle & Sebastian. There are obvious nods here to the French New Wave, and Richard Lester, and to the same kind of gentle youthsploitation movies that Wes Anderson loves. But while Murdoch exhibits masterful control in a recording studio, he isn’t what I would call a natural-born filmmaker. Some of the sequences in God Help The Girl are legitimately spectacular, and overall, I had a lot of affection for the film, similar to how I feel about David Chase’s Not Fade Away. Like Not Fade Away, the film feels stitched together, with pieces missing or placed in the wrong order. Murdoch is never able to integrate his fashionable fantasias smoothly into his main story, which has to do with Eve’s eating disorder and how she uses music to stabilize her mental health. The Joseph Gordon-Levitt side of me admires the yeoman efforts of creative people trying something new. But the Willis Earl Beal side of me knows art is hard, and that not every medium is for everyone.

Also seen: There’s a tendency at Sundance for critics to anoint movies as masterpieces too hastily, and to treat obvious non-masterpieces too harshly. I get the latter impulse. Every minute at Sundance spent watching something that’s good-not-great is a minute not spent watching the brilliant movie everyone else seem to be seeing. But sometimes I think worthy films suffer from that sense of urgency. For example, a lot of people whom I respect straight-up hated God’s Pocket, the feature-film directorial debut of actor John Slattery, following the excellent Mad Men episodes he’s helmed. Myself, I thought it was pretty strong, adapting a Pete Dexter novel about colorful, low-level Philly crooks into a movie that’s like an interwoven anthology of several 1970s “life in the big city” newspaper columns. Slattery and his co-writer, Alex Metcalf, don’t know what to do with every character in their packed cast—Christina Hendricks, for example, is underused as a mother mourning the death of her racist creep of a son—but as the film jumps from one mildly shady, usually drunk individual to another, it develops such a palpable sense of place that I could almost hear narration in my head, even when there was none.

For me, God’s Pocket also gained from being seen soon after Imperial Dreams, a doggedly unoriginal inner-city drama about an ex-con trying to go straight and protect his young son, while the legal system and his former criminal associates stymie him at every turn. Aside from some pertinent insights into the difficulties parolees face, Imperial Dreams lacks much of a raison d’être. It’s devoid of visual style and character complexity, aiming more for Boyz N The Hood-esque melodrama than Killer Of Sheep-ish poetry.

For cinematic innovation, I’ve been better-served by Sundance’s documentary section over the past couple of days. It’s not going to be easy to shake off Tony Gerber and Maxim Pozdorovkin’s The Notorious Mr. Bout, a film about arms-trafficker Viktor Bout, the “merchant of death” fictionalized by Nic Cage in the movie Lord Of War. The movie consists almost entirely of Bout’s own videocam footage, shot around the world, painting a self-portrait of a garrulous businessman who built a shipping business from scratch by being willing to move cargo—any cargo—into dangerous places. In other words: not a supervillain, just an amoral capitalist who became a big target post-9/11. On the flipside, Göran Hugo Olsson’s Concerning Violence indicts powerful men of all stripes—businessmen, colonialists, authoritarian politicians—for their long history of exploiting the people and resources of Africa. Combining vintage documentary and newsreel footage with text taken from Frantz Fanon’s 1961 treatise The Wretched Of the Earth (read by Lauryn Hill, and simultaneously printed on the screen), Concerning Violence is a powerful essay-film, dismantling arguments against revolution. Whether or not viewers agree with the conclusions reached by Mr. Bout and Concerning Violence, both are challenging, with novel constructions that match their revisionist takes on history.