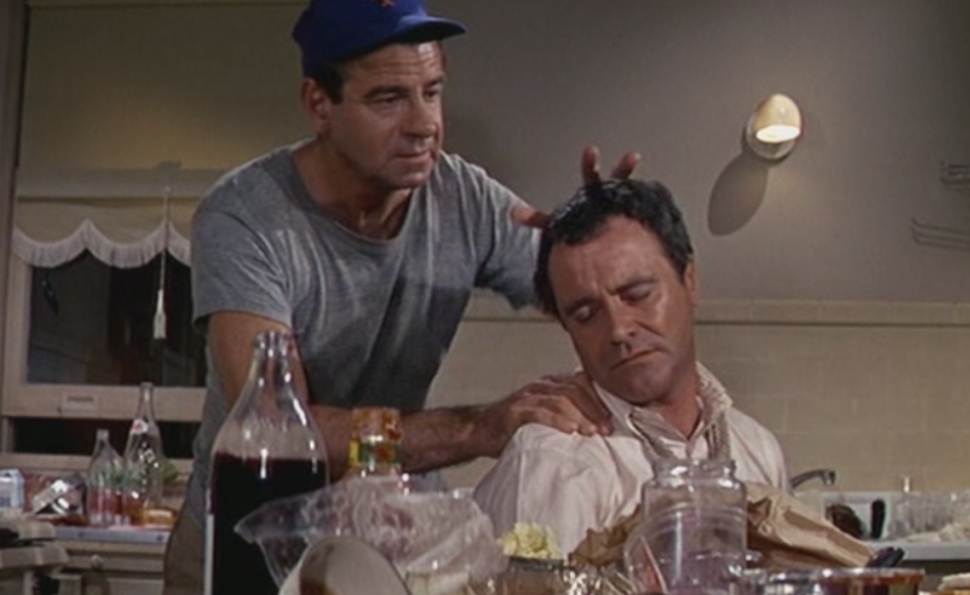 There are plenty of bleak, black comedies in the cinematic landscape, but few start out as bleakly (on paper, anyway) as The Odd Couple, Neil Simon’s Tony-winning Broadway play about a neat-freak and a slob who make a brief, mutually painful stab at living together. Gene Saks’ 1968 screen adaptation opens with the fussy protagonist, Felix Unger (Jack Lemmon), wandering the streets of New York City in a haze of misery, then making a feeble suicide attempt that’s only aborted by an unopenable hotel window and his own spasming back. It’s potentially grim stuff—except that Lemmon, at the time equally known for his comic roles in The Apartment, Some Like It Hot, and Mister Roberts, and for dramas like 1962’s Days Of Wine And Roses—carefully plays it a touch closer to comedy than drama. He isn’t broad or silly about it, at least until the back spasm provides a chance for physical comedy. But he emphasizes Felix’s haplessness, not his self-destructive anguish. And subsequent scenes, starting when he first shows up for poker night at the home of his unkempt buddy Oscar Madison (Walter Matthau) certainly suggest that while his suicidal feelings are sincere, they also aren’t particularly deeply felt.

Still, a surprising percentage of Odd Couple’s comedy focuses on the degree to which Felix may be a danger to himself after his wife kicks him out of their home, and out of their 12-year marriage. When he locks himself in a bathroom, his friends whisper about razor blades and a window he might jump out of. He admits he’s taken a bunch of pills, and they obsess over getting him mobile and vomiting. When he disappears, they careen around the city looking for him, positive that he’s finally killed himself. There’s plenty of suicide threats in Simon’s play and the film version, closely adapted from the play, via a barely pared-down screenplay from Simon himself. And that particular subplot was one of the first to go in the subsequent iterations of The Odd Couple. The basic idea of the exaggeratedly clean man and the exaggeratedly filthy one trying to co-exist as roommates has endured and reasserted itself for decades. The gag that one of the duo is perpetually on the brink of offing himself—that gets dropped.

It isn’t the only aspect of the story that’s been largely forgotten as the original version of the story gets reduced to broad archetypes. To date, there have been four different television series based on the play and film: a successful, popular Tony Randall/Jack Klugman series that ran from 1970 to 1975; a 1975 animated series about a cat-and-dog reporter team living together; a one-season 1982 New Odd Couple series with a black Felix and Oscar (Ron Glass and Demond Wilson), working from the exact same scripts as the 1970 iteration; and the recently launched CBS mid-season series with Matthew Perry and Thomas Lennon. And that’s just in America: Germany has had multiple iterations of the story as well, including the 1980 TV series Felix Und Oskar. There’s no telling how many other countries picked up the idea without keeping the names Felix and Oscar, and without hanging onto the “Odd Couple” name.

But revisiting Saks’ screen version nearly 50 years later is like a class in how comedy and storytelling evolve, and how some aspects of a story endure over time, while others get sloughed away. Saks’ film is specific to its era—to the late 1960s, to New York, and to Lemmon and Matthau as actors—and that’s easy to forget, given the way this particular buddy-comedy mechanic has lasted.

The basic story in later iterations is largely the same as it is in the screen version: Felix and Oscar are former married men who become bachelors and move in with each other, in what they think will be a mutually beneficial arrangement: Oscar gets rent, Felix gets support, they both get companionship. But then Felix, driven by anxiety and cleanliness, ups the ante on his anal-retentive tendencies. Oscar reasserts his control over their shared space, to the point of creating messes just to annoy Felix. Insulting one-liners and hyperbolic threats fly freely. For sitcom purposes, wash, rinse, and repeat, adding in guest stars and weekly complications. (In the Randall/Klugman version, one of the two men getting sick or injured, and needing the other’s care, was a frequent go-to for extra stress.)

But the Simon/Saks version mines so many other veins of humor. One of the big ones (echoed in the 2015 series) revolves around Oscar and Felix’s other buddies, a collection of sad-sack poker players who abuse and belittle each other over their behavior around the game. Plenty of film is burned on just watching them wind each other up, worry about Felix, fight about whether it’s fair play for one member to go home at midnight after a long winning streak, and gripe about the heat. They don’t serve much purpose in the story, beyond acting as Oscar’s conscience and Felix’s support network, but their banter and their clearly defined characters help flesh out the story—and place it in an era where a dollar-bid poker game counted as significant rent-salvaging money, air conditioning was a profound luxury, and even in the middle of a suffocating heat wave, men put their sport jackets back on before they’d dream of stepping outside.

There’s a similarly extensive place in the story for gender relations, from Oscar’s casual groping and propositioning of an aging waitress (who at least pretends to enjoy it, in an “Oh, you cad” kind of way) to the giggly Pigeon sisters, whom Oscar invites to his place for a dinner double date, in hopes of getting lucky. Oscar’s drooling horniness and Felix’s sexual disinterest is just a further extension of their slob-vs.-snob characters, but the film gets away from those archetypes when it focuses on the discomfort humor of a gathering where no one knows what to say, at least until Felix leads a collective weep-off over the group’s defunct relationships. The funny thing about the sequence, and one of the things (besides the swinging-’60s dresses) that marks it as specific to its era, is the way the Pigeons seem more than down with Oscar’s nice-evening-then-casual-sex agenda, but with no more idea than he does how to make it happen, except via alcohol and flirtatious, ribald nonsense, repeated until someone gets the hint and takes the plunge. There’s a hint of a sex comedy lying underneath these scenes—if Felix didn’t derail everyone’s fun into self-pity, there’s every reason to believe the gathering would have devolved into another 1968 feature, Blake Edwards’ The Party.

There’s plenty more comic business in The Odd Couple, from Felix’s public rudeness as he tries to clear his sinuses (how can someone that fussy be so unaware of the people staring as he shouts “FNEH, FMEH, FNEH” through his nose in a public place?) to Oscar’s passive-aggressive lying to his ex-wife on the phone. A lot of this material just helps establish their characters as more complex than clean/dirty: They’re both aggressively irritating, pushing their own neuroses and obsessions out into the world with a fundamental disregard for people around them.

And that’s another thing the original version of the story gets at that the other versions don’t entirely embrace: The Odd Couple is as much a drama as a comedy, because it’s about two people with so many flaws that they find it hard to maintain relationships or engage well with the world, so they can only find tolerant foils in each other. There’s an obvious imbalance in how audiences would address a simplistic neat-vs.-messy dynamic: Surely most people would agree it’s better to not leave food to moulder in a broken refrigerator, or smear it on the walls in a rage. So Felix is so neat that it impinges on other people: He badgers them about coaster use. He calls Oscar in the middle of a key moment at a baseball game, to scold him about possibly eating hot dogs. He throws a lengthy, passive-aggressive, histrionic fit when Oscar comes home later than planned, risking the meatloaf getting dry. He isn’t just fussy, he’s hateful. And Oscar, with his murder threats, linguine-hurling temper tantrums, and reported 3 a.m. demands that his wife get up and make him dinner, is equally hateful. Simon’s script heavily implies that these two jerks deserve each other—because they aren’t just jerks to each other, they’re jerks to people who haven’t signed on to co-habit in their mess.

And yet there’s a sincere and pleasant warmth between them. Lemmon and Matthau, first paired on Billy Wilder’s The Fortune Cookie, and codified as a comedy duo here, don’t have the ping-pong timing of an Abbott and Costello, or the covering-the-bases straight-man/banana-man breadth of Martin and Lewis. What they have instead is a strange but compelling dynamic of two people who intellectually recognize their history together and their mutual need. The sequence where Oscar gives Felix a backrub, complaining that Felix is so tense, he has “clenched hair,” or where Felix tells Oscar off by first ferociously praising him, speak to a longtime friendship, probably going back to childhood. Matthau’s Oscar is a cranky sentient slouch who perversely enjoys living in filth. Lemmon’s Felix is self-pitying and selfish, infuriatingly oblivious to any needs but his own. But the actors give them both a kind of desperation to be better and happier and saner, and in the process, they make a couple of caricatures relatable.

Felix and Oscar have become icons for a certain kind of comedy: the domestic version of the mismatched-buddy duo, the stereotypes who seem perpetually ready to murder each other over household disagreements. They’re an iconic superego and id, always at war, but unable to escape each other. But while those broad stereotypes have survived, the specificity of Simon’s original story—the goofy physical comedy, the acerbic one-liners, the dotty dames and sweat-dripping doofuses—winds up being more fun. Newer Odd Couples have had the freedom to pick and choose what to keep from this original story, and they’ve always gone for easy signifiers. But there’s more to these characters than writing professions, angry wives, and a disagreement over what to do with cigarette butts. In their first incarnation, no matter how focused Felix was on cleanliness, they were both fairly messy, complicated characters—and they were better off for it.

Keith and Genevieve continue the conversation over in the Forum, where they look at the film’s less-successful and more dated humor, the ways the characters’ broadness helped it endure, and the strength of the buddies outside the main buddy duo. And next week, we move on to mismatched-buddies Nick Nolte and Eddie Murphy in 48 Hrs.