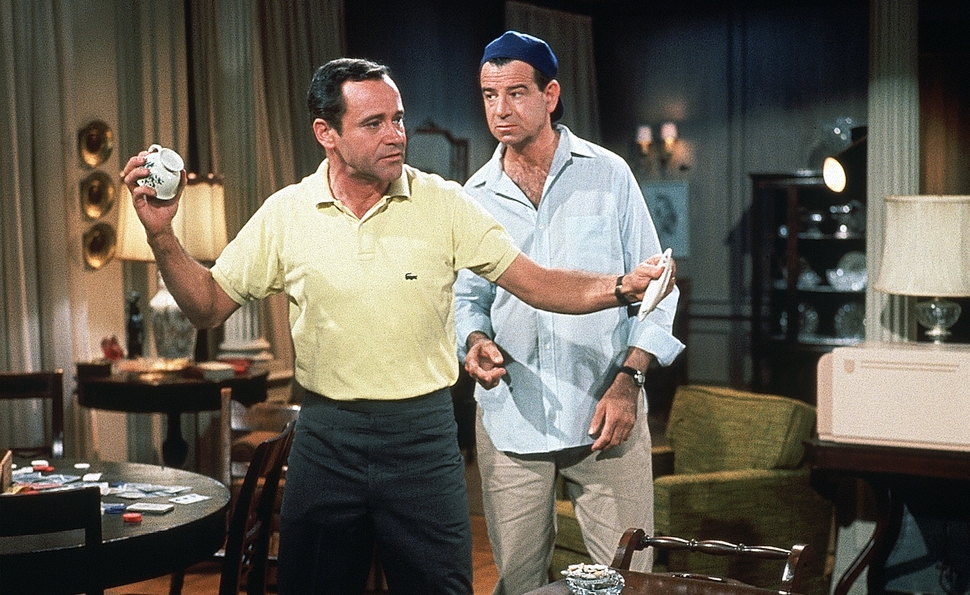 by Genevieve Koski and Keith Phipps

Keith: We debated extensively over what to include when we decided to turn March’s Movie Of The Week features over to buddy comedies, but we didn’t really think twice about considering The Odd Couple. After all, Jack Lemmon and Walter Matthau are one of the quintessential buddy comedy teams, co-starring in eight movies (not counting a handful of others in which they both appeared in the cast), and The Odd Couple is the most famous of their collaborations. That being said, it’s a movie I like without loving. A veteran of TV’s golden age, Neil Simon writes primarily in one-liners. Not all of them connect, and over the course of the film, the steady barrage of quips can be exhausting. It’s not that much to look at, either: Director Gene Saks breaks with the play’s single setting and gets out on the streets of New York—and one rooftop—but it still feels stagebound. In a 1968 review, Roger Ebert noted that even the staging owed a lot to Mike Nichols’ original Broadway production, which starred Matthau and Art Carney. Beyond that, the psychology of this piece is pretty thin, and I suspect it looks thinner on film than it did on the stage. It takes a pair of great actors to flesh out the otherwise-flat characters of Oscar and Felix.

All that being said, it does have a great pair of actors, and it’s a pleasure to watch Matthau and Lemmon work. They’d starred opposite each other just once before at this point, in Billy Wilder’s 1966 film The Fortune Cookie, but they effortlessly slip into the roles of lifelong friends, even though their characters are so different, it’s hard to imagine how they became friends in the first place. Lemmon has the showier role as the neurotic Felix, with his stuffed sinuses and inability to control his emotion. But I found I couldn’t take my eyes off Matthau, who says everything with his deadpan expression. Or, maybe more accurately, he keeps finding variations on the same exhausted question: “And now I have to put up with this?”

I want to dig into the themes of the movie and ponder why it’s proven so venerable, but let’s talk about first impressions first: Am I being too harsh on The Odd Couple? And if I’m not, did the performances redeem it for you?

Genevieve: I don’t know that it’s possible to be “too harsh” on a property that’s had the longevity and prolificacy of The Odd Couple. With this movie, its very belated 1998 sequel, four television sitcoms, and an animated cartoon under its belt, Simon’s play entrenched itself deep enough into 20th-century pop culture that it doesn’t really need us to speak for it. The Odd Couple is going to be just fine. Or perhaps I’m just saying that to make myself feel a little better about nodding in agreement with most of your criticisms—none of which, it should be said, keep the movie from being, overall, the crowd-pleasing charmer it was in 1968, and continues to be today.

That said, a lot of that one-liner humor you mention probably played better in 1968, when perhaps these gags seemed a little fresher—if nothing else, the references to Felix wearing a seatbelt at the drive-in and sending a “suicide telegram” wouldn’t seem quite so moldy. But that’s true of many—hell, most—movies released several generations ago. What gives the humor of The Odd Couple a borderline-sleepy edge today is the pacing of those jokes, which is deliberate and performative in a way that feels off by modern comedic standards, and contributes to that stagebound feeling you mention. Matthau and Lemmon have great chemistry, but their patter is informed more by the stage and TV sitcoms than natural human interaction, which often creates the sense that they’re waiting for a rimshot or audience applause after delivering their lines.

But there is still some freshness in The Odd Couple. While I agree to some extent with your assertion that it feels stagebound, I think that only applies once we get into Oscar’s apartment, which we then seemingly never leave. The movie opens with a neat pair of scenes where Felix wanders the city streets (to the strains of that iconic jazz instrumental theme), checks in to a seedy hotel where he attempts and fails to commit suicide, then heads into a go-go bar where he throws out his neck taking a shot. There’s a naturalistic verve to that opening that The Odd Couple never really gets back to once its central pair are together, and their banter takes over the film.

And while the quality and/or quantity of that banter may not be to everyone’s taste, it’s hard to deny that Matthau and Lemmon make a great comedic pair, one that avoids falling too neatly into typical straight-man/wild-card designations. Oscar and Felix are flawed in opposite but complementary ways, and while it may be difficult to ascertain why they ever became friends in the first place, it does become clear over the course of the film what each gains by being in the other’s presence: Oscar gets the feeling of being cared for that he craves as a divorcée—basically, he gets a replacement wife—and Felix gets to indulge his neuroses while being ever-so-slightly nudged beyond his comfort zone. And in the end, neither of them is forced to change by circumstance; the small changes in their personalities have occurred naturally, as a byproduct of being in each other’s presence. For a story that’s built on such an artificial premise, the conclusion sidesteps contrivance rather nicely, don’t you think?

Keith: It does, yes. And some of my favorite elements of The Odd Couple are the more understated ones. Felix and Oscar fall into couplehood without even realizing they’re complementing and clashing with each other in ways that clearly mirror their relationships with their wives. Felix keeps things neat and puts food on the table, but he’s awfully annoying in the way he goes about it. Oscar gives Felix companionship and excitement, but boy, is living with him a tiring ride after a while. I like that the underlying joke isn’t, “Tee-hee, here are straight men behaving like they’re married to each other” (which it might easily have been in 1968) so much as, “Here are these particular two men stuck in patterns of behavior that they re-create with whomever they share space.”

What else worked for you particularly well? Any scene with Oscar and Felix’s supporting cast of poker buddies—apart from that needless trek through New York—is pretty strong, and I especially like Herb Edelman as Murray the cop and John Fiedler (the unmistakable voice of Piglet) as the meek Vinnie. The scene where Felix is alone with the Pigeon sisters went on too long—nobody needs that much time to make simple cocktails—but the payoff when Oscar returns, asking “Is everybody happy?”, only to find the mood has turned funereal in his absence—that’s the movie’s biggest laugh.

Genevieve: I’m glad you brought up the Pigeon sisters scene, because I went through a little mini roller coaster of emotions over those 10 minutes or so. Though I was initially charmed by the awkwardness of their first meeting with Oscar and Felix—particularly a neat piece of blocking where Felix gracelessly inserts himself into the group, then has to squeeze between the sisters to get to a more natural-seeming position, to which Oscar quips, “Well, we did that beautifully”—the sisters’ incessant giggling and banal small talk quickly grew tiresome. Which is perhaps the point, as Felix is at the point in his separation where dating probably seems like the worst thing imaginable, much less a blind date.

But the chatter drags on to the point where my eyes started to cross, and I got annoyed by the thinness of these two characters—the only female characters of consequence in this entire movie, unless you count the waitress Oscar hits on at the diner. The only thing distinguishing them from each other is the nature in which their marriages failed, and though it’s nice to see divorce spoken of so frankly in a movie of this era, it’s all surface-level stuff in favor of that final gag, where Oscar walks in on Felix and the sisters sobbing. And while that is a good gag, one that brings the scene back around in a nice way, I feel like it would have been better if the misery weren’t so clownish and over-the-top.

What else worked for me? Spinning off your comment about the poker game, I like how concerned Felix’s friends all are for his well-being, and how hard they try to seem like they aren’t concerned when Felix is around. It’s nice that even though Felix living with Oscar eventually does become an imposition, it’s never presented that way at the outset. It’s a friend helping out another friend in need, no questions asked. That’s more refreshing than it probably should be in the realm of buddy comedies, which frequently turn on the “buddies” being forced into each others’ lives in one way or another.

And yet for all its small differences, The Odd Couple remains the quintessential buddy comedy. Outside of the enduring performances and chemistry of Matthau and Lemmon, why do you think this particular pairing of personalities, the neurotic neat-freak and the grouchy slob, has endured for so long, and in so many forms?

Keith: I don’t mean this in a way that’s disrespectful to Simon at all, but the broad strokes of the characters are so broad, they’re easy to repeat, and easy to recognize in our own lives. We all know Felixes and Oscars. We might even be Felixes and Oscars. Lemmon and Matthau bring a lot of nuance to the characters. Tony Randall and Jack Klugman did the same on the sitcom of the same name. (I haven’t checked out the Matthew Perry / Thomas Lennon version yet, but if that show’s going to work in the long run, they’ll have to do the same.) But dealing with people on either end of the slobs/neatniks spectrum is something we all deal with every day, so the flash of recognition has no doubt helped The Odd Couple endure.

It also helps that what could be personality quirks speak to a larger worldview. Felix is a control freak because he’s fearful of what the world brings to those who can’t control it. Oscar is a slob because he’s comfortable living with chaos, comfortable enough to eat and drink like it’s his last day on earth, and let gambling drain his bank account. (Matthau’s offscreen tendencies made him perfect for the part.) They’re two specific characters from one particular work, but you can see them all over the place.

Don’t miss Tasha’s Odd Couple Keynote, on the film’s many different, less enduring forms of humor that have nothing to do with its snob-vs.-slob dynamic. And next week, Buddy Comedy Month continues with Nick Nolte and Eddie Murphy in 48 Hrs.