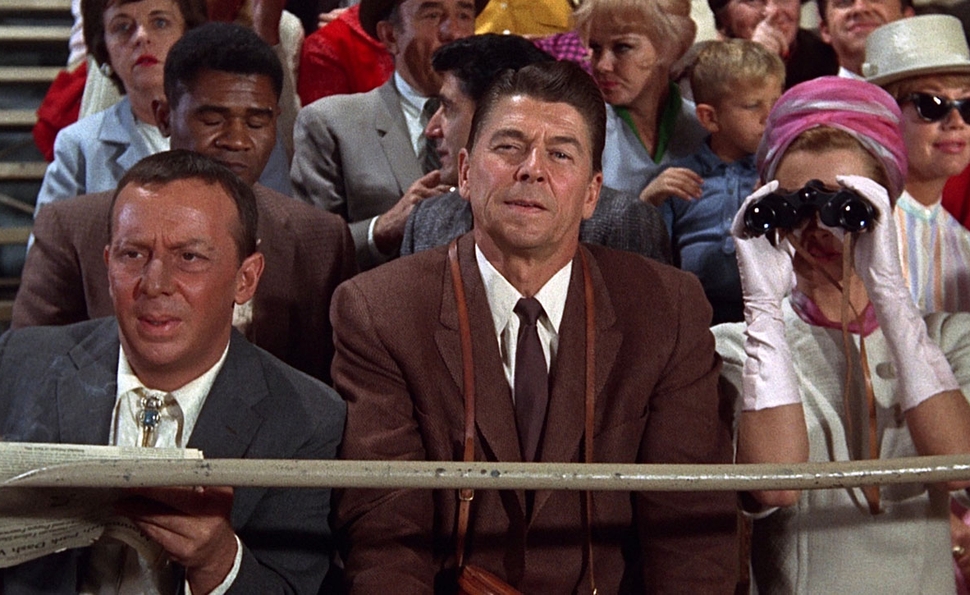 “A lot of people think they were born better than others. I’m trying to prove it’s the way you’re raised that counts. But even a monkey brought up in the right surroundings can learn the meaning of decency and honesty.” —Ronald Reagan, Bedtime For Bonzo

“I approve of larceny. Homicide is against my principles.” —Ronald Reagan, The Killers

In Back To The Future, Marty McFly (Michael J. Fox) takes a time-traveling DeLorean 30 years into the past and tries to convince the machine’s inventor, Dr. Emmett Brown (Christopher Lloyd), that Marty comes from the year 1985. He shows him his driver’s license. (“Look at my birthday. I haven’t even been born yet.”) He shows him a family picture, in which his sister is wearing a “Class of 1984” sweatshirt. Dr. Brown isn’t convinced. “Tell me, future boy,” he asks, “who’s president of the United States in 1985?” The answer leaves him incredulous: “The actor?! Then who’s vice president? Jerry Lewis? I suppose Jane Wyman is the first lady. And Jack Benny is secretary of the treasury.” Dr. Brown suspected it before, but now he knows the kid is crazy.

Based on Ronald Reagan’s filmography, the prospect of him taking major political office certainly seemed absurd at the time. Of the long list of forgettable oaters and television theater that pockmarked his acting career, only two Reagan vehicles survived in popular culture: 1940’s Knute Rockne, All American, in which Reagan plays a fatally ill Notre Dame halfback named George Gipp, and 1951’s Bedtime For Bonzo, in which Reagan plays father to a lab chimp. The former, with its inspirational “win one for the Gipper” halftime speech, became a useful slogan once Reagan left acting to pursue his political ambitions; the latter, which cast Reagan as a hapless straight man dealing with a monkey’s shenanigans, became a useful cudgel with which to beat him over the head. How could this buffoon manage a whole country if a single primate gives him this much trouble?

Whenever actors venture into politics, their performances become fodder for the dirt-digging that happens in any campaign, though the information it yields tends to range from irrelevant to unctuous. (On the latter front, Ashley Judd’s recent toe-dipping in Kentucky’s toxic political waters had Republican media hacks dashing to Mr. Skin for smearing purposes.) But the Gipper speech in Knute Rockne and the chimp comedy of Bedtime For Bonzo are nonetheless cultural touchstones for the 40th president, and consistent with the overall scope of Reagan’s career: He always played the good guy. For 25 years, as if his own Marty McFly travelled back in time to stage-manage his eventual political career, Reagan cultivated an image of bland, uncomplicated affability.

And then he smacked Angie Dickinson in the chops on the way out the door.

In 1964—the same year his last feature, Don Siegel’s The Killers, oozed into theaters—Reagan gave a speech in support of Barry Goldwater’s presidential bid; two years later, he ascended to the first of two terms as governor of California. He reportedly hated The Killers and regretted appearing in it, but it’s the odd-duck performance of his career—and for Reagan-haters, the most deliciously ironic and revealing. Siegel, a brilliant genre specialist, was originally intended to adapt Ernest Hemingway’s short story “The Killers” in 1946, but the job ultimately went to director Richard Siodmak, who turned it into a noir staple. Hemingway’s story needed extensive elaboration to become a proper feature, but the gist of both adaptations is this: Two killers carry out a hit on a man who does nothing to resist his fate.

The Siodmak version has a dynamite opening scene—hat tip to Hemingway on that one—but it’s more a down-the-middle noir after that, supporting a solid procedural with lovely, high-contrast black-and-white photography. Siegel’s strategy for the 1964 version was to do everything differently: Shot in bright colors and set mostly during the day, his The Killers is overtly violent and brazenly sexual, a lurid, sadistic tour through the criminal underworld. Originally produced for the small screen, it was considered too hot for TV, and it slipped into theaters instead—a move that, in retrospect, probably helped Reagan sweep it under the rug. Best not to have your performance as a glowering sociopath broadcast to every living room in America.

Reagan’s motives for appearing in The Killers are unknown—perhaps he wanted to try something different, perhaps he was just a working actor collecting another paycheck. But Siegel’s motives for casting Reagan aren’t mysterious in the least. Just as the director zagged wherever Siodmak’s version zigged, he used the opportunity to dismantle Reagan’s good-guy image in much the same way Sergio Leone did four years later with Henry Fonda in Once Upon A Time In The West. Reagan turned out to be a much more charismatic actor in office than on the big screen, but Siegel didn’t hire him for his acting chops so much as the element of surprise. It’s a classic example of casting against type—though Reagan’s detractors might claim The Killers reveals the real Reagan more than the aw-shucks bullshit with the monkey.

Siegel’s admirable commitment to tastelessness begins with the first scene, when Charlie and Lee, the killers of the title, carry out a hit at a school for the blind. Played by the dream pairing of Lee Marvin and Clu Gulager, respectively, Charlie and Lee head straight to the head administrator’s officer, where they promptly terrorize a blind secretary into revealing the mark’s classroom. When they show up, the victim, a former race-car driver named Johnny North (John Cassavetes), passively accepts his death, which eats at Charlie in the aftermath. Why were they paid so much to kill him? And why didn’t he bother to run? He and Lee go out searching for answers, starting with Johnny’s former mechanic; all roads lead, literally and metaphorically, to Reagan as sinister kingpin Jack Browning.

Flashing back to when Johnny was alive, the film reveals the femme fatale in this scenario to be Dickinson’s Sheila Farr, a woman who lives off Browning’s money, but appears free to pursue other romantic interests. When Johnny gives Sheila a ride around the track, the look of unhinged ecstasy on Dickinson’s face suggests that the MPAA should retroactively create a new rating to accommodate it. Johnny knows Sheila is trouble, but it’s in his nature to step on the gas; when an accident robs him of his peripheral vision—thus ending his ambitions as a racer—Sheila and Jack rope him into a lucrative road heist that feels conspicuously like a setup. The money is good, though—far more than Johnny could ever make by risking his neck on a racetrack. 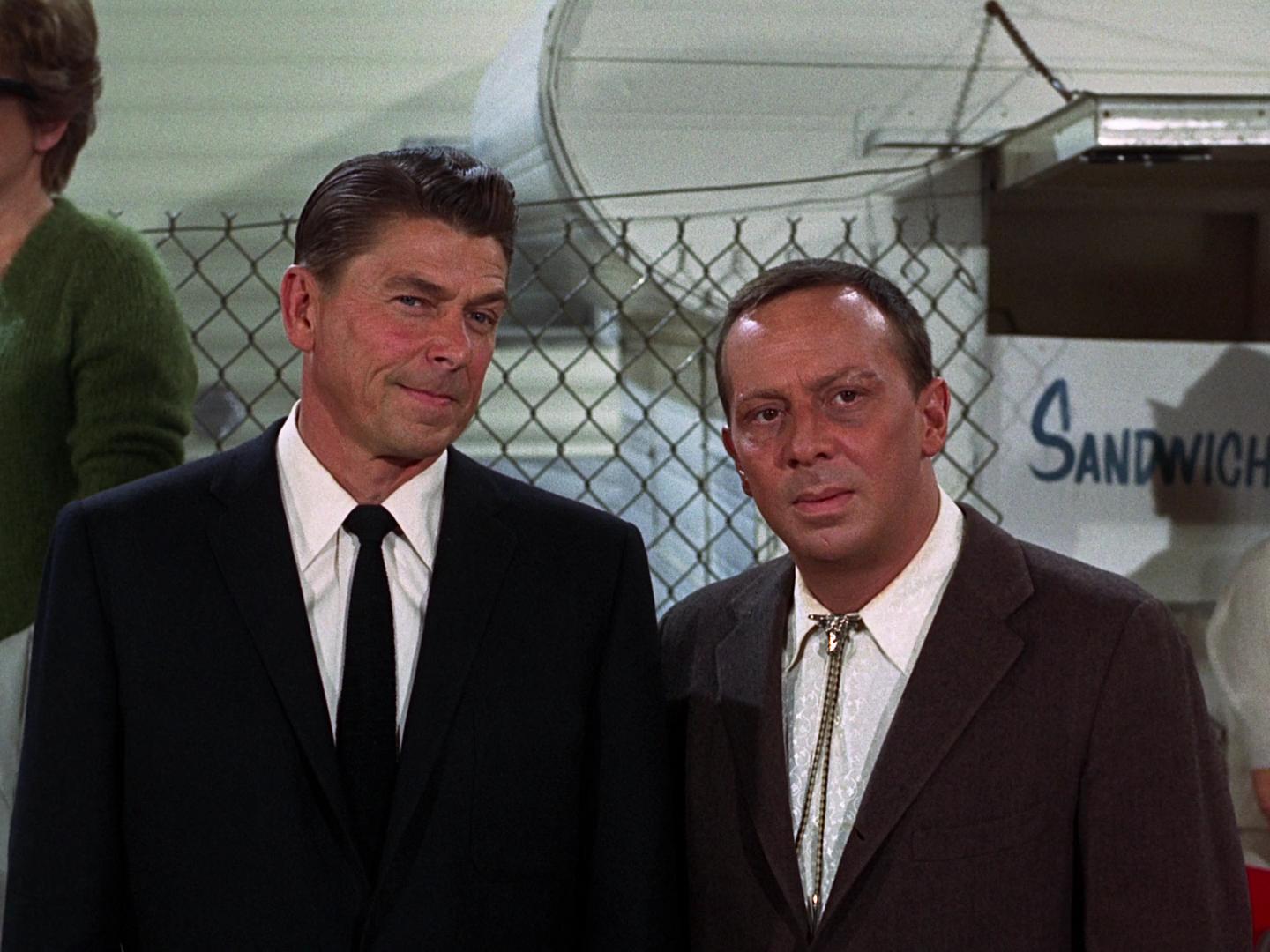 The moral of the story? Crime pays. And related to that, the men with the money, like Jack Browning, are the ones who hold all the cards. That’s why Johnny is resigned to his fate: There’s no angle left for him to take, no way for him to escape Jack’s sphere of influence, no point in even trying. Reagan presides over The Killers with unsettling poise, secure in the knowledge that he’s in control of his criminal realm, at least until Charlie comes nipping at his heels. If not for the scowl that often crosses his face, he bears that familiar presidential stature—even when he slaps Sheila for defying him, it turns out to be a tactical move rather than a fit of anger, a little theater for Johnny’s benefit.

At the same time, there’s something deeply perverse about Jack’s nature. The first shot of Reagan in The Killers has him staring at Dickinson’s Sheila through binoculars, acting as a voyeur as she seduces Johnny in the pits. His jealousy is part of a ruse, but it’s real, too, as is the ripe impression that Jack likes to watch his woman ensnare other men with her considerable wiles. Reagan doesn’t play the role particularly well: He wears anger—and fake anger—like an ill-fitting suit. (Variety at the time: “Ronald Reagan fails to crash convincingly through his good-guy image in his portrayal of a ruthless crook.”) And he looks especially overmatched next to pros like Marvin, Gulager, Dickinson, and Norman Fell (now best known as Mr. Roper from Three’s Company), who plays Jack’s lackey as a sniveling bootlick. Henry Fonda was a revelation in Once Upon A Time In The West; in The Killers, Reagan was out of his element.

Still, what Siegel and Variety couldn’t know was that Ronald Reagan would become the 40th president of the United States—and in that respect, time has been enormously kind to The Killers and Reagan’s performance. As much as audiences must have been surprised at the time, seeing Reagan now, acting as the heavy in such an unsavory movie, is like catching the hall monitor smoking in the bathroom. Jack Browning was a sinister glimpse of Reagan as a leader of unmatched power, and though it’s fiction—and far from how Reagan wished to present himself—its B-movie fantasy is nonetheless alluring. The Killers is never going to take Ronald Reagan’s name off the airport, but for a leader with such a burnished legacy, it’s a welcome smudge.