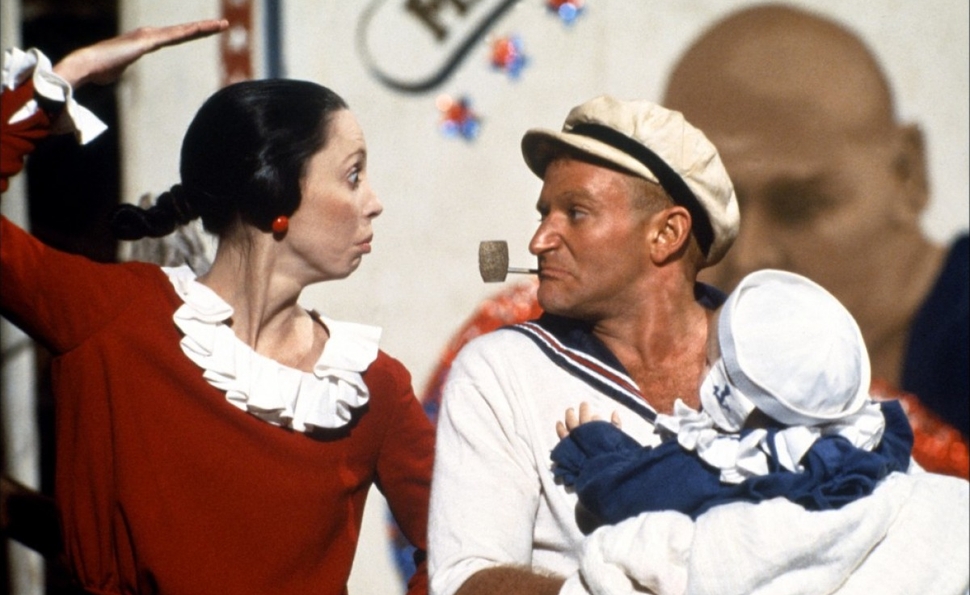 How Robert Altman turned Popeye into an Altman movie

Let’s start with a caveat: Robert Altman doesn’t belong in a column called Departures, because his entire career was effectively a series of departures—or at a minimum, an application of the Altman method to a vast array of studio and indie projects, covering every possible genre, and periods ranging from the turn-of-the-century Northwest to the Great Depression to broad surveys of contemporary scenes. He even tried his hand at a John Grisham thriller. As producer after producer learned about Altman, the iconoclastic director wasn’t willing to modify his style to adhere to changing commercial trends. The overlapping, semi-improvised dialogue, the organic melding of setting and ensemble work—those methods weren’t going to change, apart from being constantly refined. The results are varied, but not the process.

And yet 1980’s Popeye remains a special case, mainly for the fact that Altman, never anyone’s idea of a commercial filmmaker, was entrusted with a studio project of enormous scale and expectation. He was also in the middle of the biggest slump of his career, having followed 1975’s landmark Nashville with a decade and a half of flops that included some great films—1977’s 3 Women chief among them, and 1984’s Secret Honor and 1990’s Vincent & Theo beyond Popeye—but didn’t end until his scabrous showbiz satire The Player in 1992. As it happens, Altman was the perfect choice for Popeye. He was a filmmaker with experience in musical comedy whose irreverence stood out even in the auteur ’70s.

Enter Robert Evans, the larger-than-life Paramount honcho whose tenure, outlined in his delicious piece of Hollywood braggadocio The Kid Stays In The Picture, included the two Godfather movies, Rosemary’s Baby, and Chinatown. While not outright claiming credit for these benchmark triumphs of American studio filmmaking, Evans clearly believed that if he could tame the likes of Francis Ford Coppola and Roman Polanski, he could likewise harness Altman’s talents into creating a mainstream juggernaut. He wound up paying for his hubris, albeit not as dearly as most people assume. Evans bitterly regretted Popeye—and reportedly came to blows with Altman over it during the production, which was marred by rampant drug use—but the film was hardly a bomb in relation to cost. It was just the misfit in town, much like its one-eyed, thick-armed, mumbling pariah of a hero.

For the film’s detractors—and they are legion—the opening sequence is Exhibit A in an argument for Altman’s ineptitude that the rest of the film more or less rebuffs. Beyond the cartoon majesty of Sweethaven, a ramshackle seaside town built with Disney and Paramount’s money on the island of Malta, nearly every first step is the wrong one. Of Harry Nilsson’s songs, so charmingly discursive and lacking in bombast throughout the film, “Sweethaven—An Anthem,” the one number that unites the entire village in chorus, is nearly impossible to hear clearly over the din of voices. (And the choreography, such as it goes, mostly involves the townspeople walking out of their houses en masse.) When Robin Williams’ Popeye, shrouded in rain gear, pulls up to the dock in his dinghy, his lines are post-dubbed as elegantly as the dialogue in a Godzilla movie. And his labored exchange with the taxman (Donald Moffat), who adds a “question tax” on top of docking fees before biking after gawking kids to collect a “curiosity

Given the homogeneity of the current, more disciplined blockbuster machine, it’s hard to imagine Popeye unspooling before family audiences in theaters across the country. Nothing so funky could pass today’s extensive market-testing before getting made, much less get a pass from the multiplex pollers of CinemaScore. Yet Popeye gets better and more ingratiating as it goes along, which may be less a result of Altman, Feiffer, and Nilsson picking up the slack than a result of Altman teaching the audience how to like his movie. What’s initially abrasive and sloppy later seems offhand and winning, because it’s just so stubbornly an Altman vision, a ragtag assemblage of characters, songs, and slapstick bits that eventually cohere into a family entertainment in every sense of the phrase. Like that adorable scamp Swee’Pea, who arrives like a rattlesnake in a basket, it’s a charming lil’ stinker, ready for adoption.

Owing more to E.C. Segar’s original Thimble Theatre strip than the more widely known Fleischer Studios cartoons that followed—for one, this Popeye hates spinach, and yaps like an overgrown baby at the mere mention of it—Popeye finds the sailor man docking in Sweethaven due to a hunch that his long-lost pappy is somewhere in town. In the meantime, he takes a room with the Oyl family, who are preparing the latest in a series of engagement parties to marry off Olive (Shelley Duvall) to Captain Bluto (Paul L. Smith), the hirsute bully who keeps order by terrorizing the citizenry. (Bluto’s “She loves me, she loves me not” routine with a potted flower is akin to Al Capone bringing his baseball bat to a meeting in The Untouchables.) Despite Olive’s on-again/off-again betrothal to Bluto, she takes a liking to the mealy-mouthed stranger, and the two bond over their affection for the soothsaying Swee’Pea.

Had Popeye been a huge hit and added another chapter to the Robert Evans myth, it would have been the hardest triumph yet for the producer to credit himself for pulling off. Altman’s fingerprints are all over Popeye, which in the broad view is like a family-friendly re-imagining of McCabe & Mrs. Miller, moving the same mud-caked, dilapidated town from the Pacific Northwest to the Mediterranean seas without losing the anti-capitalist sentiment in the process. The tyrannical forces that eventually overcome Warren Beatty’s McCabe—and the West itself—in the earlier film are here manifested in Bluto, the taxman, and the unseen “Commodore” who’s pulling the strings. Though Williams speaks through a frozen scowl, his mumbling uncannily resembles Elliott Gould’s Philip Marlowe in The Long Goodbye, whose running commentary on the excess of L.A. life comes out in half-whispered barbs. Listen closely, and many of Feiffer’s best lines and malapropisms. (“Don’t touch nothin’,” Popeye says in a gambling den/whorehouse. “You might get a venerable disease.”) They’re barely heard above the clamor, as if Altman is slipping past children’s ears and pitching his most adult jokes straight to the parents.

But the embodiment of all that is good about Popeye is Duvall’s Olive Oyl, who only needs the big shoes and the ornate headdress to look exactly how Segar imagined her in 1919. Tall, thin, and angular, with saucer eyes, full lips, jet-black hair, and a distinctly breathy tone of voice, Duvall was a symbol of the rebel 1970s in that she didn’t fall within the narrow spectrum of what a movie-star should look or sound like. As many have said, she was “born” to play Olive Oyl, but it’s a real performance, too, flighty and distracted, yet sweet to the core, with perfect little “oooooo” sounds whenever there’s trouble (she’s like a Marge Simpson precursor) and a moony romanticism that carries the spirit of the whole production. Her rendition of Nilsson’s “He Needs Me” resurfaced to great effect in Paul Thomas Anderson’s Punch-Drunk Love—which owes much of its intoxicating mixture of violence, discord, and innocence to Altman’s film—but it stands on its own for its abrasive sweetness.

Popeye could be called a symphony of bum notes, and that isn’t meant as an insult. The film’s one persistent problem—the difficulty of translating cartoon comedy into live-action comedy—causes certain setpieces to fall flat, including a climactic chase that moves at half-speed, and a showdown with Bluto and an octopus that doesn’t pay off as strongly it should. But even the flaws mesh with the overall fabric of the film in a way that impeccably choreographed musical numbers and fight scenes might not have. Altman reverses the emphasis of most mainstream family entertainments, which are about pace and snap, and instead favors a gentle, more inviting evocation of Sweethaven and its oddball inhabitants. Robert Evans wanted an answer to the Broadway hit Annie. Instead, he got a Robert Altman film.

Next: Burt Reynolds in Boogie Nights