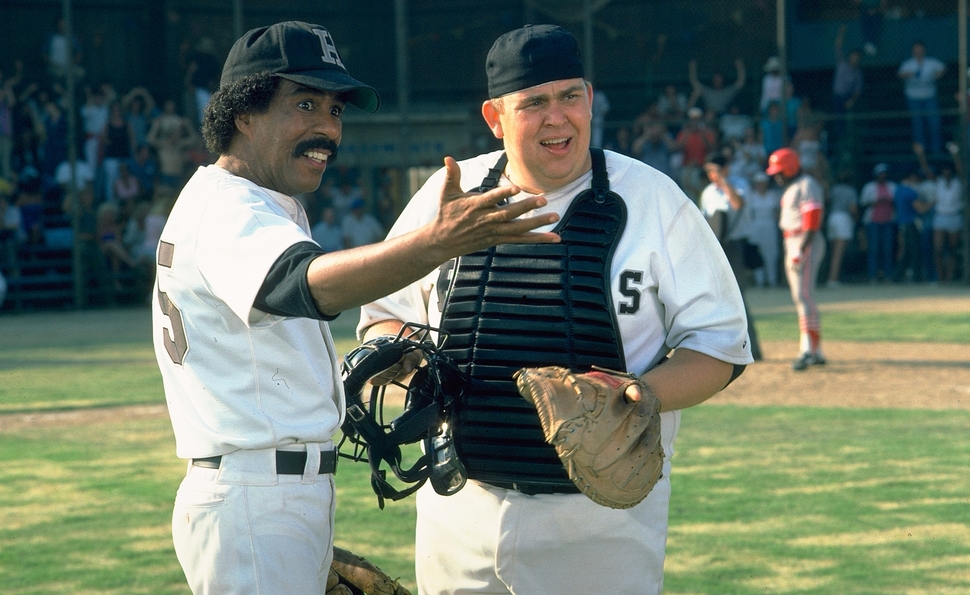 Between action films, Walter Hill remade a venerable story and discovered his limits

Okay, so there’s Robert Altman in the early-to-mid-1970s: M*A*S*H, McCabe & Mrs. Miller, The Long Goodbye, Thieves Like Us, California Split, Nashville. (Curiosities like Brewster McCloud and Images were sprinkled in there, too, but bear with me.) Also, Francis Ford Coppola during the same decade: The Godfather, The Conversation, The Godfather Part II, Apocalypse Now. And Martin Scorsese: Mean Streets; Alice Doesn’t Live Here Anymore; Taxi Driver; New York, New York; Raging Bull. But alongside those runs by widely acknowledged titans of the American cinema renaissance, I offer this one by Walter Hill, from 1975 to 1982: Hard Times, The Driver, The Warriors, The Long Riders, Southern Comfort, 48 Hrs. And in the middle of that, he produced the original Alien, too.

Compared to the other three—to say nothing of Steven Spielberg, Brian De Palma, or other accomplished film-school brats of the period—Hill doesn’t have any conspicuous stylistic stamps, like Altman’s use of overlapping dialogue, or Scorsese’s constantly roving camera. Hill is an auteur closer in spirit to the original Hollywood craftsmen identified by the French: a master of genre—in his case, the action/Western film—who distinguished himself largely within the system, rather than presenting himself as an overt iconoclast. At its best, his direction (and writing) is a model of to-the-bone minimalism, with no extraneous words or actions—like a swift, bare-knuckled slug to the jaw. Howard Hawks by way of Jean-Pierre Melville. (For evidence of his spare aesthetic, check out the first page of his script for The Driver.)

In 1984, Hill took a gamble with Streets Of Fire, a “rock-’n’-roll fable” that infused a period musical with the graphic color of The Warriors, but came up snake eyes. Perhaps the box-office failure of Streets Of Fire accounts for why Hill opted to make Brewster’s Millions the next year. After all, he wasn’t immune to the demands of an industry that had sharply rebuked the freewheeling spirit of the previous decade, when the inmates ran the studio asylum. Universal needed its own Trading Places, dammit, and Hill was going to be the one to provide it. He mastered the mismatched, mixed-race buddy picture with 48 Hrs., and perhaps he could do for Richard Pryor what he did for Eddie Murphy. On Hill’s end, it was a chance for commercial redemption after a high-profile bomb, and an opportunity to show a little versatility. Howard Hawks was a master at screwball, too, directing classics like His Girl Friday and Bringing Up Baby. Why couldn’t Hill do likewise?

Hardcore auteurists like to bend themselves in knots defending the misbegotten as misunderstood for a variety of reasons—critics weren’t ready for it at the time, they missed some notes of subversion, the same elements present in a filmmaker’s most celebrated work were also present in a presumed dud. My advice on Brewster’s Millions, as someone quick to defend the orphans in Hill’s filmography (Extreme Prejudice, Johnny Handsome, Undisputed, etc.): Abandon all hope, ye who enter here. There’s great value in understanding directors as the authors of films—otherwise, cinema history makes absolutely no sense whatsoever. Similarly, there’s value in recognizing when the good ones fail, whether through compromises forced by the system, breakdowns in the script or casting, or their own inability to bring the material across. It can be fascinating when these failures are personal and crazily ambitious, like Icarus flying too close to the sun—Nathan Rabin, our resident flop-master, affectionately calls such films “fiascos.” But sometimes, they’re the opposite: dim, compromised, and dead on arrival. That’s the case with Brewster’s Millions.

So how do you solve a problem like Richard Pryor? Here was indisputably the era’s edgiest, most galvanizing stand-up comedian, heir apparent to the bomb-thrower that was Lenny Bruce, but singular, too, with a spontaneous, conversational style that flitted through a range of topics both cultural and personal. He had some commercial successes as a movie star, like Silver Streak and Stir Crazy, his team-ups with Gene Wilder, and many more bombs—Critical Condition, anyone? Moving? Another You?— but it isn’t right to lay the blame on his limitations as an actor. He was a charismatic, affable screen presence, and he was capable of intense vulnerability on the few occasions he was asked to convey it. It’s ironic that his best movie and best performance came in Paul Schrader’s 1978 film Blue Collar, a drama about unionized auto workers that exploited the full range of Pryor’s capabilities. But more often, his career in Hollywood bore an uncomfortable resemblance to his character in The Toy: He was treated like an out-of-the-box funnyman, with someone else pulling the strings.

Brewster’s Millions cast Pryor as Montgomery Brewster, a long-in-the-tooth pitcher for a Hackensack minor-league team so pitiful that active train tracks run through the outfield. Ever the optimist, Brewster believes a major-league call-up is right around the corner, but until then, he and his battery-mate Spike Nolan (John Candy) are content to suck down beers at Torchy’s and get into a little action. Incidentally, those last two details—drinks at Torchy’s and the bar fight that follows—are the only clear indications that Brewster’s Millions is a Walter Hill movie. And it’s all over in mere seconds.

Brewster’s dreams of returning to the big leagues persist longer than his obliviousness remains funny, but he nonetheless has another opportunity when he’s shepherded up to a big-city law firm. It turns out that a distant relative has died, and he’s the sole inheritor of the estate. But there’s a catch: He can either take a cool million upfront, or he can claim his full $300 million inheritance by spending $30 million in 30 days. That might sound easy enough, but at the end of the month, he isn’t allowed to accumulate any assets. He also isn’t allowed to tell anyone why he’s spending money so recklessly and extravagantly, including the prudent accountant/love interest (Lonette McKee) who’s tallying all the receipts. Brewster’s stinking-rich relative has devised this game to teach Brewster to hate spending money, but there’s another lesson in it, too: The rich tend to get richer, no matter how foolishly they invest their money.

George Barr McCutcheon’s 1902 novel Brewster’s Millions was adapted for the screen at least once in every decade of the 20th century save the 1970s, and it’s easy enough to see why, given how beautifully the conceit lends itself to the fantasy of a rags-to-riches story, and the comedy of a riches-to-rags story. Allan Dwan’s 1945 version is widely considered the standard, mainly on the strength of a riotous second act where Brewster keeps getting returns on his reckless expenditures. (My favorite gag: Brewster sees a man getting mugged at gunpoint, and cheerfully comes out with his hands up, nodding helpfully at the thousands tucked into his inside jacket pocket.) That’s where Brewster’s Millions has to snap, in the absolute madness of Brewster blowing money on cockamamie enterprises, lame horses, and bad stocks, having them all pay off, and then mystifying his friends by acting as if his dog had just died. The jokes have to be good, yes, but more importantly, the energy and pacing has to be breathless. Such is the elusive magic of screwball.

Hill seemed like the right man for the job, given his zeal for economy, but he didn’t write the screenplay for Brewster’s Millions, and the one he got, by Trading Places scribes Timothy Harris and Herschel Weingrod, is full of bad ideas he couldn’t whip into shape. Dwan’s film wisely has Brewster set up an amorphous business that specializes in short-term hare-brained ideas. The 1985 version initially follows suit by lining up bespectacled inventors pushing their oft-rejected plans, but Brewster latches onto the first one (attaching a motor to an iceberg and transporting it to an ice-deprived nation), and that’s the end of it. He bets on all the long shots, including Loyola over Notre Dame in field hockey, but there isn’t even the attempt at a joke there. The Dwan version has Brewster and his friends actually witnessing his pitiful horse pull off an upset—Brewster in agony, his friends cheering wildly—but the payoff here is just a pile of cash dumped on the floor.

The other schemes are bigger and take forever to pay off. Brewster wants a chance to pitch against the Yankees, so he splurges on uniforms, training, and improvements to the stadium to make it happen. (It’s as hilarious as it sounds.) He then embarks on an expensive mayoral campaign with a “None Of The Above” message, arguing that neither of the other candidates on the ticket merit a vote. Again, no attempt at a joke here, let alone satire, just the cynical assumption that all politicians are losers, and that audiences will chuckle along in recognition. The subplot effectively eats up Brewster’s bank returns and about 15 minutes of screen time, but that’s the end of its service to the film.

In their effort to turn Brewster’s Millions into another Trading Places, Harris and Weingrod did everything short of tossing the title page and changing the character names. The greedy old lawyers who stand to get the money if Brewster fails are fill-ins for Ralph Bellamy and Don Ameche; the effete weasel they hire to sabotage Brewster’s chances is of a type with the blue-blood who homes in on Dan Aykroyd’s fiancée when his fortunes turn. Then there’s Pryor as Murphy’s watered-down, PG-rated replacement, Candy brought in to create a watered-down, PG-rated version of the earlier film’s black-and-white buddy-movie dynamic, and a plot that brings a down-on-his-luck hero into sudden, extravagant, tenuous wealth. And take a look at the posters: 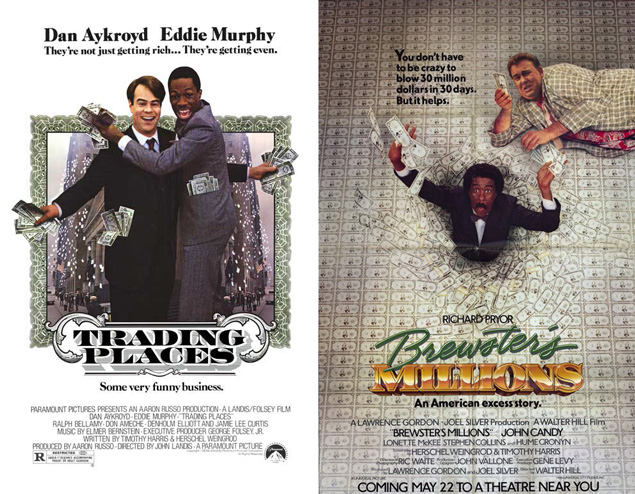 So where is Walter Hill in all this? He comes from a school of filmmaking where directors could make their mark within a studio framework, but Brewster’s Millions is the studio framework making its mark on him. If Heaven’s Gate remains the most prominent symbol of a time when Hollywood was the mercy of auteur excess—and Steven Bach’s classic making-of book Final Cut bears that out—then movies like Brewster’s Millions are a symbol for how Hollywood got the power back. Making a straight-up comedy was a departure for Hill, who never returned to the genre again. But the biggest departure was the one he took from himself.