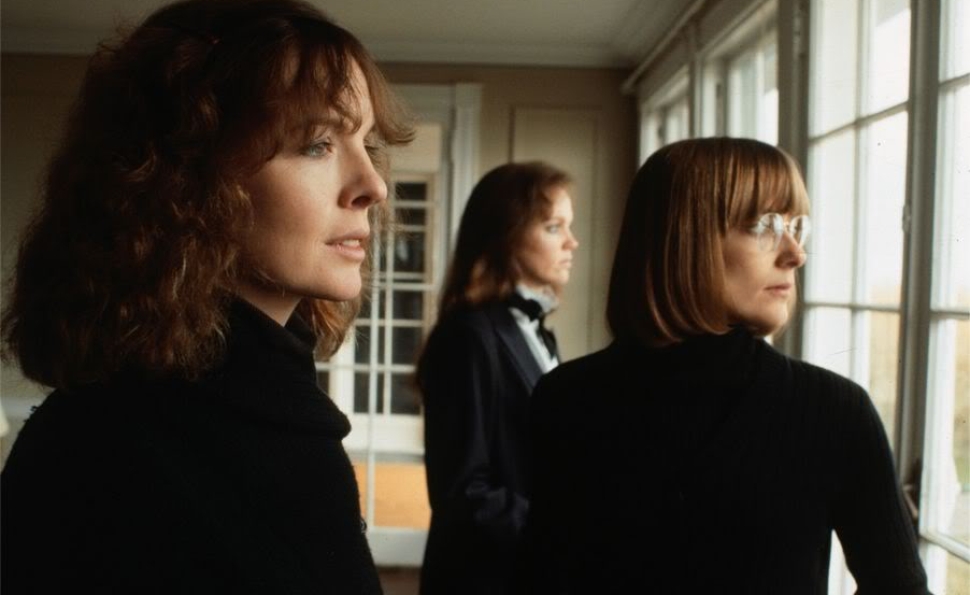 When Woody Allen first got serious

“What am I striving to create, anyway? To what end? For what purpose? What goal?” — Diane Keaton, Interiors

Before bringing Interiors into the world, Woody Allen spent a decade mastering a sophisticated form of low comedy, mingling the silly antics of the Marx brothers and Buster Keaton with the droll intellect of his stand-up and New Yorker magazine contributions. Viewed in order of release, Take The Money And Run, Bananas, Everything You Always Wanted To Know About Sex* (*But Were Afraid To Ask), Sleeper, and Love And Death reveal a slow creep away from the outright tomfoolery of his “early, funny” comedies and toward a wit more verbal than physical. So it wasn’t any great leap to follow Allen from Love And Death to the Oscar-winning Annie Hall, which has the playfulness of his earlier work, but added a new level of insight into relationships, culture, and a bundle of personal obsessions and neuroses. Then, the year after Annie Hall capped a decade of Allen as American cinema’s most prolific and accomplished humorist, the laughter stopped. Completely.

The warning signs were there all along. Allen’s comedy often riffed on soured relationships and existential despair, and he greatly admired the films of Ingmar Bergman—his character in Annie Hall refuses to walk into Bergman’s Face To Face after his girlfriend shows up a few minutes late to the screening. Because the Bergman name is so strongly associated with European cinema at its most punishingly austere, people forget he was also capable of a delicate bedroom comedy like Smiles Of A Summer Night, which acts as a kind of mirror image to his dramas. There’s no mistaking the Bergman influence on Interiors’ look and feel—at times, Allen mimics his idol so slavishly that the film can seem like a lounge act—but Allen was also seeking to follow Bergman’s career in reverse. He’s known for his comedies, but his success gave him the capital to play his themes dead straight, which is a much trickier proposition. A career-long dramatist shifting to comedy sounds refreshing; a shift from comedy to drama sounds like a sour affront.

“Interiors is at war with itself, as turbulent in its clash of sensibilities and motives as the suffering souls who have it out on Long Island.”

Yet Interiors was, by and large, a successful bid for respectability. Reviews were mostly good, and it earned Oscar nominations for Allen’s screenplay and direction, Geraldine Page and Maureen Stapleton’s performances, and the set decoration. (Note to future set decorators: There’s prestige in choosing and placing your symbolic vases wisely.) But the pans were more prominent and arguably stickier to the film’s legacy. Vincent Canby of The New York Times called Allen out for forfeiting his sensibility to that of another artist (a Zelig-like feat of assimilation, as it happens): “It’s almost as if Mr. Allen had set out to make someone else’s movie, say a film in the manner of Mr. Bergman, without having any grasp of the material, or first-hand, gut feelings about the characters. They seem like other people’s characters, known only through other people’s art.” And Pauline Kael’s incisive review in The New Yorker dismisses the whole bloodless exercise with devastating sentences like this one: “The movie, with its spotless beaches, is as clean and bare as Geraldine Page’s perfect house: you could eat off any image.”

White on black titles. No music. Cut to interior shots of an empty, meticulously appointed Long Island beach house on a foggy morning, before we see Diane Keaton with her hand on the window, as if trapped in this suffocating place. Interiors is already off to a mannered start. But then E.G. Marshall as Arthur, the wealthy patriarch of the family, starts talking about the “abyss” that opened up between himself and Eve (Page), his dementia-stricken wife, and it just as quickly finds its dramatic footing. Through beautifully integrated flashbacks, we learn that Arthur, tired of dealing with Eve’s mental illness in his early 60s, has opted for a “trial separation,” and she’s been in and out of the sanitarium since. Of their three daughters, Joey (Mary Beth Hurt), a listless actress/literary agent/whatever, has been most burdened with Eve’s care, and she harbors the most resentment about the situation, which she takes out mainly on her controlling, delusional mother. Her sister Renata (Keaton), an accomplished trust-fund poet married to Frederick (Richard Jordan), a failed novelist and accomplished drunk, is too wrapped up in her own neuroses to take a firmer hand. Meanwhile, youngest sister Flyn (Kristin Griffith), a flighty TV actress in Hollywood, has no troubles beyond the worry that she doesn’t get enough respect to be in movies.Not that it would have changed their minds, but Canby and Kael couldn’t have known where Allen’s dramatic side would go after Interiors, from the bifurcated comedy/drama of Hannah And Her Sisters and Crimes And Misdemeanors to further exercises in asceticism like Another Woman and September. But the later films confirm that Interiors wasn’t just an isolated exercise in Bergman mimicry, but a more authentically personal exercise in Bergman mimicry, with themes on art, family, relationships, and death that reappeared later in his work. The difference is minimal between, say, Stapleton’s character here—a cheerfully vulgar “other woman” type—and the spacey young aerobics trainer (Lysette Anthony) who comes between Sydney Pollock and Judy Davis in Husbands And Wives. Much of what’s great about Interiors comes from Allen writing a piercing drama, straight from the heart; much of what’s bad about Interiors come from his arid feints at duplicating a master. 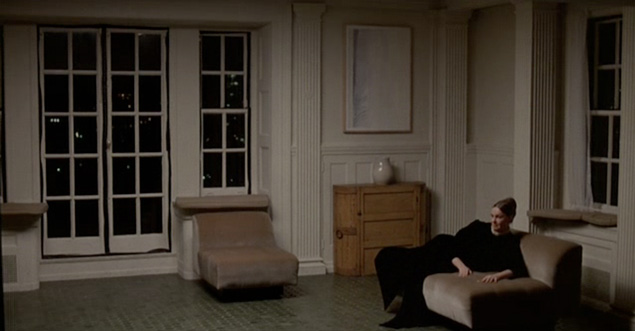 The arrival of Pearl (Stapleton), an ebullient twice-married woman who wins Arthur’s affection, sets an explosive sequence of events in motion. For years, Renata, Flyn, and to some extent Arthur himself have done nothing to extinguish Eve’s delusion that her marriage could be restored, and Joey’s honest discouragement on that front has driven a wedge between her and her mother. Her only lifeline severed by divorce, Eve freefalls into an emotional abyss, and the ugly feelings that had been percolating among her family members and their significant others come to a head during Arthur and Pearl’s wedding weekend. I’ll let Death Cab For Cutie, which paid homage to the film in the gorgeous song “Death Of An Interior Decorator,” play out the scene:

They tenderly kissed then cut the cake

The bride then tripped and broke the vase

The one you thought would spend the years

So perfectly placed below the mirror

Arriving late you clean the debris

And walked into the angry sea

To a degree, the “you can eat off every image” quality of Interiors isn’t just a mannered aping of Bergman, but a sad reflection of the way Eve sees the world and how it suffocates her family. As the title suggests, nearly all of the film takes place in the pale interiors of cinematographer Gordon Willis—only one scene before the climax ventures outside, upsetting the rigor for some unaccountable reason—and Allen makes a torment of the chamber drama. It may be perverse for Interiors to be so utterly devoid of humor, but these are characters whose lives are in a state of paralysis, with career opportunities either dashed or unsatisfying, partnerships frozen by longstanding duties and resentments, and a demented matriarch who cannot stop making their arrangements for them. When Pearl shows up in her red dress, breaking the drab uniformity of grays and whites and endless beiges, it pierces the eye like stepping into sunlight after years in solitary. She’s a sweet woman and a horrible affront.

Interiors is about the conflict between the pursuit of personal happiness and the obligations family members have toward each other, and it doesn’t go easy on anyone involved. Eve may be severely mentally ill, but she isn’t a basket case: Her hope for reconciliation with Arthur is genuine and her failure to make it happen is a continual devastation. She’s all too eager to hear false encouragement from Renata about how much better she’s doing, and she takes Joey’s pessimism about it to heart. And yet Eve is not so oblivious that she misses Arthur stringing her along with a cold exchange of pleasantries, which leads to her first suicide attempt.

Eve’s breakdown and its ripple effect through the family is great, meat-and-potatoes drama, despite the loaded symbols of Pearl’s dress and Eve’s vase driving it home. But whenever Interiors gets away from its core conflicts, its mannered trappings start to become more apparent. The film gets lost in generalized anxieties, like Renata’s fear of death, or desultory events that are relegated to the sidelines, like the listless marriages between the elder sisters and their husbands, or Frederick’s near-sexual assault of Flyn the night of the wedding. Allen lets fly with musings from the psychiatrist’s couch and monologues about metaphysics and guilt that sound conspicuously high-toned. The final shot—which made the poster—may be the low point in the movie, arranging the sisters in an absurdly theatrical profile and having two of them exchange banalities about the sea. (“The water’s so calm.” “Yes. It’s very peaceful.”) Fade to black.

Interiors is at war with itself, as turbulent in its clash of sensibilities and motives as the suffering souls who have it out on Long Island. Allen isn’t Bergman—or Eugene O’Neill, for that matter—and his most studious efforts at imitation tend to be where the film struggles most. Yet Interiors remains a Woody Allen film, harnessing themes and obsessions particular to him, and doing it in a form that was alien to the director and his fans. It isn’t entirely the perfect fit—something the flaws of Another Woman and especially September later confirmed—but it leads to moments of raw emotion and insight that can’t be expressed as comedy. It isn’t a tasteful museum piece like Eve’s vase; it shatters.