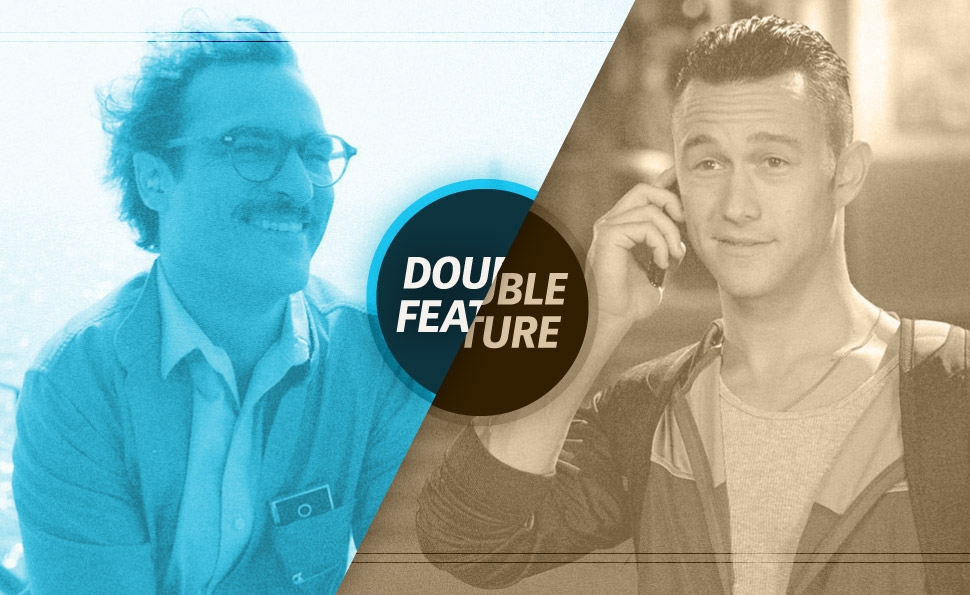 Scarlett Johansson co-starred in two theatrically released films in 2013, both of which essentially break her down for parts: In Spike Jonze’s Her, she appears only as a throaty, alluring disembodied voice, while in Joseph Gordon-Levitt’s directorial debut, Don Jon, she exists primarily as a body, at least in the eyes of the film’s lothario protagonist. Both Samantha, the artificially intelligent operating system of Her, and Barbara Sugarman, the “perfect 10” of Don Jon, function as catalysts first and characters second, but they’re both arguably even more essential to their films than the male leads, because they reflect what these men are and who they need to become.

It’s telling that both Her and Don Jon focus on male protagonists and are written and directed by men, albeit men with arguably sensitive and nuanced views on mixed-gender relationships. They’re also both films about narcissists, men who seemingly can only only understand women—or, really, anyone—as extensions of their own wants and needs, and Johansson functions in both as the manifestation of those desires. Her was released to more acclaim than Don Jon, and is much weightier in conception and execution, but watching the two films back to back reveals two filmmakers at different stages of development and ability, pondering similar themes: how we seek comfort and escape in technology, how that affects our real-life relationships, and whether love can exist as a one-sided proposition. (Spoiler: It cannot.)

Samantha and Barbara are idealized, objectified versions of women based on the main characters’ tastes. In Don Jon, Gordon-Levitt’s Jon repeatedly calls Barbara the most perfect thing—note the “thing”—he’s ever seen, an evaluation based primarily on her physical resemblance to the women in the pornography he spends hours watching each day. In Her, Samantha is literally the ideal woman for Joaquin Phoenix’s sad-sack Theodore Twombly, an intuitive piece of technology that adapts to him, without him even realizing she’s doing it. She’s everything he wants, without him having to say, or even understand, what he wants. 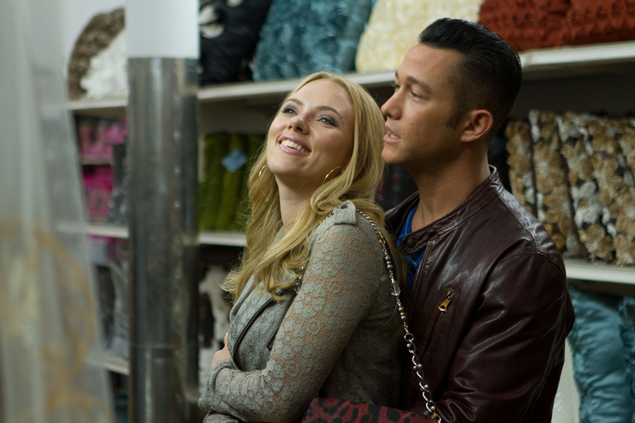 It isn’t too much of a stretch—particularly when watching the films as a pair—to say Samantha’s intuitive catering to Theodore’s desires is only a few steps removed from the societal gender expectations that have formed Jon’s skewed view of the world, and informed the way Barbara presents herself to him and everyone else. Even her surname, Sugarman, suggests a certain ingrained appeal to male desire. That’s even more apparent in the character of Jon’s mom (Glenne Headly), who is constantly flitting around in the peripheral vision of her son and husband, serving them food and generally making them the center of her universe.

Samantha listens to Theodore, does things for him, and asks him questions about himself, without exhibiting any needs or desires of her own, outside of her desire for him—at least at first. Barbara isn’t this kind of woman, though she pretends to be, cooing and calling Jon “baby” over and over as she subtly shapes him into the man she thinks he should be. He’s willing to go along, under the narcotic haze of sexual desire—especially since the changes are things he arguably wants. Early in Don Jon, he comments that he needs to change things up, suggesting that his sudden interest in having a relationship and going to night school is an effect in need of a cause, which he finds in Barbara. Just as Theodore’s relationship with Samantha prompts him to stop being a hermit and get back out in the world following his devastating divorce, Jon’s relationship with Barbara provides a sort of dry run for adulthood.

But once Barbara’s needs stop being about what she wants for Jon and start being about what she wants for herself—specifically, having a boyfriend who doesn’t compulsively watch pornography and lie about it—their relationship implodes. Then Jon finds another, healthier catalyst for change in an older classmate, Esther, played by Julianne Moore. But like Barbara, she exists primarily as an extension of him, what he needs to move on to the next, hopefully more evolved stage of life. This is where Her becomes more interesting and nuanced in how it handles its female lead. Whereas Don Jon loses track of both Barbara and Esther in its focus on Jon’s development, Her shows Samantha acquiring her own agency, and depicts Theodore’s discomfort in realizing she doesn’t exist only for him. In fact, she exists for thousands of other people, roughly 600 of whom she’s also in love with. This is obviously an extreme situation born of Her’s high concept, but it boils down to the fact that, artificially intelligent or not, no one exists solely for another person.

Her and Don Jon are about men slowly, painfully coming to grips with this fact, and ostensibly coming out on the other side with a more enlightened view of romantic relationships. Neither is the first film to do this, but both do it through the lens of technological fixation, which is increasingly shaping the way people relate to each other. While Her extrapolates current trends into a totally plausible yet magical-seeming near-future, Don Jon approaches technological fixation from a more mundane angle. Gordon-Levitt is attempting to say a lot of things with his film, most of them at an extremely high volume that’s even more apparent next to Her’s quiet assurance. But one of the smartest points he makes is about the comfort of routine, and how much of his protagonist’s addiction to Internet pornography boils down to habit. Masturbating to online videos is something Jon can, and does, do with no more effort than it takes to pull up a game of Candy Crush or idly scroll through Twitter during commercials. Similarly, all Theodore has to do is tap an earbud, and there Samantha is, ready and willing to satisfy his emotional, intellectual, and organizational needs. Such ease of access is the gateway to addictive habits: When we can have something anytime we want—physical, emotional, or intellectual gratification, or simply having our email read to us—it stops being a specific desire, and becomes part of the fabric of everyday life. 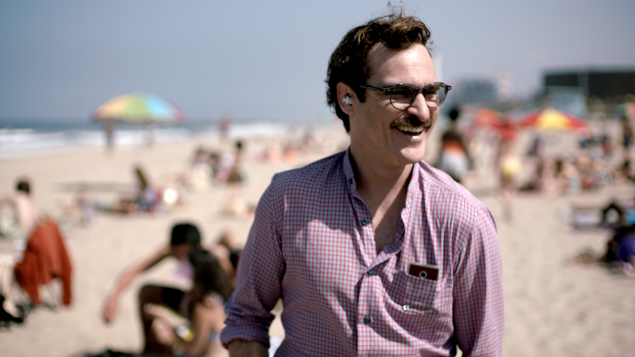 It isn’t until Jon and Theodore extract themselves from this routine—the former of his own volition, at Esther’s urging; the latter unwillingly, when Samantha evolves into a higher plane of consciousness and out of his life—that they’re able to form meaningful human relationships. Which isn’t to say that Theodore’s relationship with Samantha isn’t meaningful, especially to him—but it is undeniably artificial in the lack of risk it represents for either party. Theodore uses this artificial relationship to escape the pain of his last human relationship, with Rooney Mara’s Catherine, who pointedly tells him over their divorce-paper signing, “You always wanted to have a wife without the challenges of actually dealing with anything real.” Theodore takes this an an unfair slight against a relationship he sees as very real, but it could easily serve as a mission statement for both films.

Jon is more of a dullard than the sensitive Theodore, and any emotional pain he exhibits is buried under layers of socialized detachment. But that disconnect, with women in particular, has resulted in a preference for the artificial perfection of pornography over the messy complications of actual sex—or, even scarier, actual human connection. As Esther eventually teaches him, the two things often go hand in hand. In a neat bit of reversal, the film equates Jon’s preference for fantasy with Barbara’s love of Hollywood romances (spoofed in a movie-within-the-movie starring Anne Hathaway and Channing Tatum), which have skewed her own perceptions of Jon and their relationship. The preference for the comforting lie of escapism isn’t bound by genre or gender, nor is the danger of letting that lie alter our view of reality.

Don Jon and Her both end with their protagonists taking baby steps into the deep end of meaningful relationships, without fully committing to a happily ever after. Because happily ever after is the sort of artificial fantasy that’s incompatible with the complexities of real life—the sort of artificial fantasy associated with Johansson’s character in both films. It takes nothing away from Johansson’s performances to say she serves as the ultimate fantasy object in both films. And it isn’t until she’s gone that the men she captivates can come back down to earth and get on with real life.