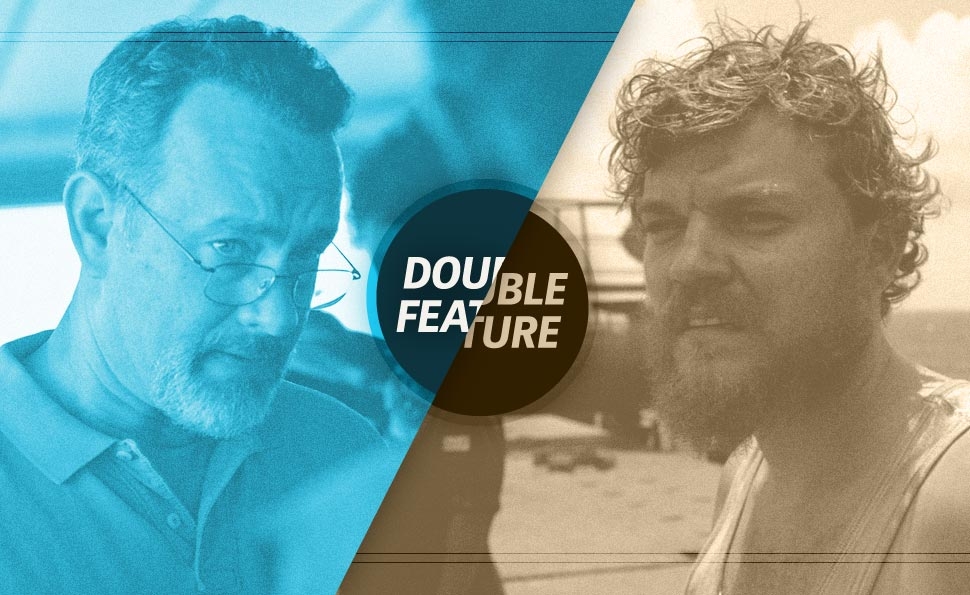 The 2013 based-on-a-true-story American film Captain Phillips and the 2013 fictional Danish feature A Hijacking both begin in the same place, with a crew member from a commercial freighter talking to his wife about how his job takes him away from home for extended periods, and what the separation does to her and their offspring. Both movies end in the same place as well, with the same character traumatized into incoherence, unable to communicate to outsiders what he’s just been through. And in the middle, both films explore the same scenario: a freighter hijacked by Somali pirates, who threaten to kill the captain and crew unless the ship’s owners come across with a multi-million-dollar ransom. But in spite of the similarities, they’re such startlingly different films that they complement each other more than they compete with each other. Their methods and focuses differ, but neither invalidates the other; both approaches can comfortably co-exist and comment on the same real-world events with equal insight.

2013 was a banner year for fraternal-twin films—movies that explored strikingly similar plots or themes, but in such different ways that the resemblance is much clearer in description than in the experience. White House Down and Olympus Is Fallen both pit action heroes against terrorist forces assaulting Washington D.C. It’s A Disaster and This Is The End trap friends in a house together during an apocalyptic event, and watch their relationships disintegrate. Spring Breakers and The Bling Ring simultaneously celebrate and mock youth culture by following a young group of thieves obsessed with their perceptions of a glam, media-influenced lifestyle. Rush and Weekend Of A Champion use close looks at 1970s racing stars to explore the daredevil experience and the drive to win. Even Turbo and Planes both follow plucky wannabe-racers whose slowpoke bodies seem destined to keep them from glory, until their racing idols turn out to be arrogant cheaters whose betrayal just sparks more determination.

When twin movies are too close to each other in detail—when they’re more like identical twins—they can reflect poorly on each other, each making the other feel obvious and creatively bankrupt. What makes 2013 unusual, though, is the degree to which these two films (and the other pairs we’ll be exploring in more detail over the next month) comment on and inform each other, highlighting each other’s story choices. Taken back to back, they frequently show the ways in which a single setting or basic plot outline can still support many different kinds of stories and storytelling, depending on the filmmakers’ intentions.

For instance, while A Hijacking and Captain Phillips start with similar scenes, they each immediately move in different directions, toward territory that sets up a voice and a structure. Director Paul Greengrass and screenwriter Billy Ray (working from Richard Phillips’ memoir about a real 2009 hijacking) open with the eponymous Captain Phillips (Tom Hanks) traveling to Oman for his latest freighter run. Then the film shifts to neighboring Somalia, to reveal the pressures driving the pirates, from their violent, demanding bosses to the brutal poverty and competition for paying jobs. When pirate leader Muse (Barkhad Abdi) heads to sea, the implication is that like Captain Phillips, he’s just clocking in at work. And once he gets on board Phillips’ ship, the emphasis becomes stronger, as Muse repeatedly points out that everything he’s doing is just business, and this is just his job—the only one available to him, given the economic climate of his country. Unfortunately for everyone, his business and Phillips’ are in direct conflict. 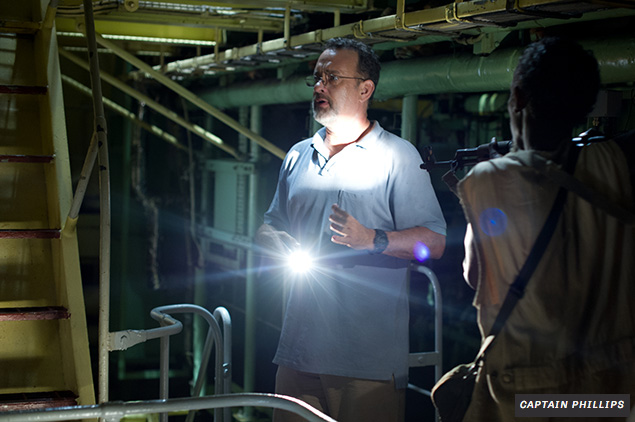 A Hijacking shares Captain Phillips’ sense of agendas in permanent conflict, but the clash is more focused on finance than moment-to-moment mortality. The piracy in A Hijacking is also just business, but it’s examined from the perspective of what that business costs the low-ranked employees with no voice in the business negotiations. Writer-director Tobias Lindholm opens with a freighter’s cook, Mikkel (Pilou Asbaek) already on the boat, sweet-talking his unhappy wife over a scheduling change that will have him coming home days later than planned. (On second viewing, that scene plays with especially sad and heavy irony, given her objections to a few days’ delay, and the way the subsequent hijacking stretches out over months.)

From there, Lindholm establishes the rhythms of the film and Mikkel’s relationships with the other men on board the ship; he tracks the cook at work and at leisure, bantering with his shipmates or enjoying a quiet moment. Where Captain Phillips is all taut, in-the-moment action-movie tension, A Hijacking sprawls and floats, emphasizing how time stretches intolerably for people with virtually no control over their own fate.

Lindholm also takes time to set up the film’s other pole, who, like Muse, is just doing his job: Shipping-company CEO Peter Ludvigsen (Søren Malling), who transitions directly from successfully chipping millions of dollars off a business contract negotiation to trying to similarly hardball the hijackers on the price for releasing his ship. Peter isn’t exactly the film’s villain, but he’s a recognizable face on the forces of commerce that interpret everything in terms of its price, including his employees’ lives. And his ego in putting himself into the negotiations, rather than hiring an expert, sets the film up for disaster. Much of A Hijacking follows those long, painful negotiations, and the way Mikkel’s abductors use him as a pawn to manipulate Peter. Both films emphasize how time blurs by in a moment of crisis or joy, and how it drags in the downtime, even with lives on the line. But their relative pacing is one of the biggest differences between them.

The other is their relative opinions of their hijackers. Captain Phillips turns on that profound tension between Muse’s casual characterization of his job, and Phillips’ understandable and opposing perspective that he’s being bullied by thieves and murderers. He has some sympathy for the hijackers, particularly the youngest and most naïve of the crew, and the film is rarely didactic as it examines the two sides’ fundamentally incompatible goals, and the blatant, self-serving lies both use to forward them.

But the way Captain Phillips humanizes and characterizes its pirates helps fill out a missing perspective in A Hijacking, which makes its hijackers into a more inscrutable, alien force. Only their spokesman Omar (Abdihakin Asgar) speaks a language the crew understands, so when Omar’s group takes over a Danish freighter, the crew and hijackers are largely stuck miming at each other, with the pirates waving weapons and yelling, and the crew cringing and trying to obey orders they can only guess at. A Hijacking only individualizes a couple of its attackers: Most of the Somalis are simply a uniform force to be reckoned with and surrendered to. But they seem far more comprehensible when watching the two films back to back.

Each film includes parts of the hijacking process that the other leaves out. Captain Phillips focuses on suspense—on taut editing, music that builds to crescendos, steadily rising action throughout, and the constant feeling that lives are on the line. To that end, the hijacking itself is a centerpiece of the movie: Phillips’ evasive action and piracy countermeasures, the terror of the moment when the pirates board and take control, the confrontation between the captain and his captors, the cat-and-mouse game as the crew fights back. A Hijacking, meanwhile, elides the ship’s capture entirely, just as it elides the hijackers’ backgrounds or personal identities and turns them into another market force with a specific, personal cost. 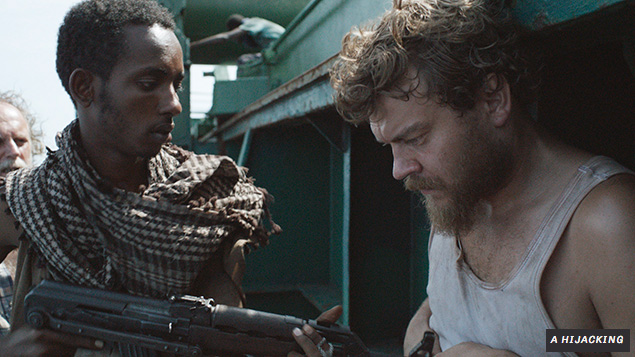 Moments of humanity and accord aren’t utterly lacking in A Hijacking: when Mikkel, bored and hungry after weeks of waning rations, catches a large fish after a titanic struggle, the excitement of the event brings the crew and the hijackers together for celebratory beer and bonding. But most of the time, they’re held apart from the Danish boat crew. There’s a sense that in Captain Phillips, audiences are meant to hope the standoff can end well for everyone, as improbable as that is. In A Hijacking, viewers are meant just to want it all to end, and to resent the way Peter’s need to save face for the company, and keep its costs manageable (and his own ego intact) drags out the process needlessly.

Granted, not everyone who saw Captain Phillips interpreted the pirates as sympathetic. The film’s action finale ramps up to a massive scale involving the U.S. military, which deals with the situation competently and mercilessly. The military’s tack is that America does not negotiate with terrorists. That makes for a strong counter-narrative to A Hijacking’s long-term, frustrating, morally muddled negotiation with terrorists, which wears Peter down right along with Mikkel. The latter film reads like a cautionary tale explaining why the ruthlessness of the former is necessary; compromising, or failing to use any means necessary to end the standoff, could result in endless bartering that leaves the victims in danger for weeks on end instead of hours. The sheer abrupt definitiveness of Captain Phillips, and its explosive release of two hours of tension, led some viewers to take it as a simple white-hats/black-hats scenario and publicly cheer at the film’s conclusion, startling the critics who saw the entire scenario as less cut-and-dried. There’s no such release in A Hijacking, which ends its confrontation with a weary sigh and a sense of incontrovertible damage done.

But while there’s no question that Captain Phillips is a more thrilling, more rousing film—not to mention the one based on real events—A Hijacking feels like the truer story. Captain Phillips is laid out as the story of a real-life hero, to the dismay of some of the people involved in the actual 2009 hijacking incident. A Hijacking lacks a hero, and takes a more grounded, exploratory look at the hijacking experience. While Captain Phillips helps fill in what the pirates are thinking and why they use the tactics they use, A Hijacking fills in the experience of the crew and their families back home, waiting for word. It’s odd that Captain Phillips starts with that conversation between Phillips and his wife, but never comes back to her; A Hijacking, meanwhile, spends copious time with Mikkel’s wife and the folks fearfully waiting for news of their loved ones on the ship.

Ultimately, the films have more in common than they have in conflict: Structurally, they’re both about one sympathetic protagonist, and a second man who considers his actions necessary, even if they might get the protagonist killed. Both are about moral compromise and the various shades between capitulation and resistance. Both use the similar setting to stage questions about where morality lies when mortality is on the line, and at what point money is more important than human lives. The fact that one is a real-world thriller and the other a low-key arthouse film never holds them apart; if anything, Captain Phillips is far more nuanced than the usual action-thriller, and A Hijacking is far more thrilling than the usual arthouse drama. Both films take the same idea in different directions, but they mine it to the fullest. But they’re even fuller in relationship to each other.

Our 2013 Double Feature series continues next week with Scott Tobias discussing the isolation-and-survival stories of Gravity and All Is Lost.