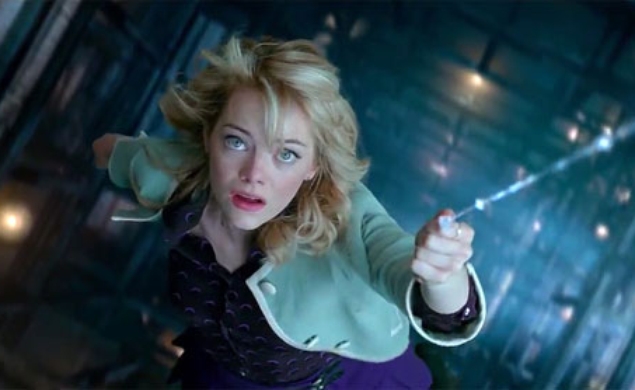 Why Emma Stone Deprived Us Of An Emma Stone-Starring Ghostbusters Reboot: Because franchises
Emma Stone has explained why she passed on Paul Feig’s all-female Ghostbusters reboot. “I don’t think we should be remaking boy movies with girls,” she confided. “Plus, I don’t believe in ghostbusting.” Fine, what she really said was, “The script was really funny…it just didn’t feel like the right time for me. A franchise is a big commitment—it’s a whole thing. I think maybe I need a minute before I dive back into that water.” Then she winked and added, “I am a ghost.”

I Don’t Know Of The Day: Is The Princess Diaries 3 happening or WHAT
Last week, Kate (Erbland) celebrated the news of Princess Diaries 3, a fun, lightly fictionalized adaptation of Kate (Middleton’s) raunchy college journals describing her raw sexual bond with Prince William. Today, a “source close to Disney” told Entertainment Weekly that the film is not currently in development. Disney hasn’t spoken up at all yet, because everybody over there is too busy firing up live-action remakes. So which one is it? Can a girl get some goddamn Genovia-based hijinks up in here or nah?

A French Movie Of The Day: Alain Guiraudie’s next project, Rester Vertical
Alain Guiraudie, director of the fantastic erotic thriller Stranger By The Lake, has lined up his next project, Rester Vertical, a gripping docu-drama following the rise and fall of Vertical Horizon. Just kidding, we have no idea what this movie is about. The film’s title is French for “stay vertical,” which could mean it’s about the importance of not collapsing on one’s own face or it’s a punk-rock celebration of the decade’s best vertical-marketing strategies. Screen International has described it as a “road movie,” and Guiraudie has offered little by way of plot detail, saying only, “The film will be set deep in the heart of France with the aim of making the implausible plausible, the impossible possible, and to go on a long journey close to come, to bring elsewhere closer and escape around the street corner.” Okay, maybe it IS about Vertical Horizon!

Untitled Action Comedy Of The Day: This one, starring Jason Momoa, Thomas Middleditch, Famke Janssen, and Bruce Willis
Jason Momoa, Thomas Middleditch, and Famke Janssen have joined Bruce Willis in an untitled action comedy from Mark and Rob Cullen. Willis will star as a “private eye in Los Angeles whose professional and personal worlds collide when his dog is stolen by a gang,” which, wait, is this the John Wick 2: LOL we were promised? Momoa will play a “gang leader who ends up with the dog and forces the private eye to do some jobs for him,” and Middleditch is in negotiations to play “a geek working in Willis’ one-man operation.” Doesn’t that make it, at the very least, a two-man operation? But I get it, like—what is a man, you know? Janssen is playing Willis’ sister-in-law who has zero additional qualities outside of being married to Bruce Willis’ brother.

New Type Of Bucket List Of The Day: A “pre-baby bucket list,” as seen in Ari Sandel’s Preconception
Ari Sandel, who recently directed Hilary Duff biopic The DUFF, has been “set loose” (run!) by CBS films to direct Preconception. The film, from a spec script by Jake Morse and Scott Wolman, is a comedy about a “mid-30s couple who resolve to cut loose and tick off items on a pre-parenthood bucket list before getting tied down by a baby.” Lots of violent, umbilical-cord-esque imagery happening in this summary that I’m not enjoying, as a one-time owner of an umbilical cord.

Hollywood! Of The Day: The Last Witch Hunter sequel’s been greenlit before the first one is even out
Vin Diesel has taken to his Facebook page—his second favorite place to visit, after the to-scale Coney Island replica he built in his master bathroom—to share the news that the upcoming The Last Witch Hunter is not the last The Last Witch Hunter. “So the studio apparently is so excited by The Last Witch Hunter—The Axe And Cross franchise…that they are already commencing on the next one,” he typed furiously with one hand, his other palm holding back a commuter train. “The first one doesn’t hit theaters until October 23rd, yet they want me to commit and already block out time to film it. As always, I love to hear your feedback…Kaulder: Are you a good witch…or a bad witch?” He ended the post with the hashtag #WitchHunterWednesdays, closed his laptop softly, then wrenched a lavender tree out of his front yard and smelled it, smiling.