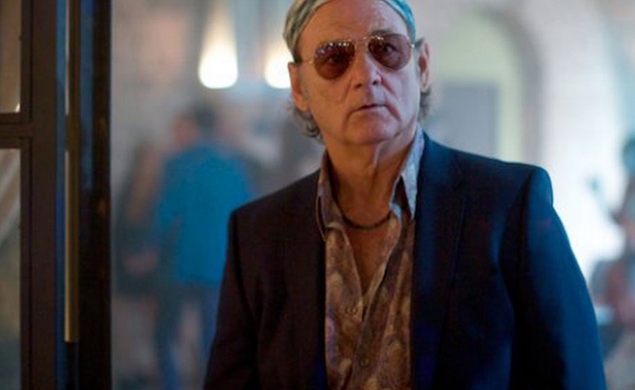 So many trailers dropped in so little time today. Which means we’re due for a Newsies Special Sidebar: Trailers Of The Day:

The first Rock The Kasbah trailer (out October 23)

In Barry Levinson’s long-awaited Rock The Kasbah, Bill Murray plays Richie Lanz, a rock-tour manager who’s fallen on hard times and is grizzled and jaded and Bill Murray-esque. He takes his only remaining client (Zooey Deschanel) on a USO tour of Afghanistan, because it’s a great vacation spot—always warm! But when Zooey steals his passport and all of his money from him, he’s left with nothing but his very chill wardrobe. He’s got to find a way home, a way to get a super-talented teen girl he’s discovered onto a show called Afghan Star, and his way into Kate Hudson’s very cute jeans. Even though this looks a bit tonally uneven, has had its release date pushed a few times, features the line “I’m royally screwed!” and Murray’s burned me before—St. Vincent, what the fuck was that?—I’m excited for Rock The Kasbah, so SUE ME (and take all my money and passports).

A Deadly Adoption stars Will Ferrell and Kristen Wiig as a couple who take in pregnant girl (Jessica Lowndes) whose baby they plan to adopt; instead, the pregnant girl starts trying to murder them. It’s Lifetime’s attempt to prove it’s in on its own joke, sort of like when everybody’s making fun of you at the lunch table and you sit down next to them and start laughing and smash a pie in your own face. This teaser is very short, but it features a sobbing Lowndes gunning it down an empty road toward a bloodied Ferrell. She really is a strange girl.

Guy Ritchie’s kickin’ it old-school with The Man From U.N.C.L.E., an old-timey spy thriller based on the 1964 TV series that stars Henry Cavill as super-spy Napoleon Solo. This looks fun as hell.  And Alicia Vikander’s here! Armie Hammer’s here, too, with the type of over-exerted Russian accent that will stress me out for the entire movie in the same way that it stresses me out to watch a very complex Olympic figure-skating routine.

The millionth Ant-Man trailer (out July 17)

Ant-Man doesn’t come out for a month, but I already want to give it a tiny punch in its tiny face. How many casting and directing notices and teasers and teaser trailers and normal trailers does one movie need? How many times can we watch Paul Rudd pretend not to hate himself for doing this movie? How many ants does it take to make a man cry? Anyway, this new trailer serves to remind us that, yes, Ant-Man is part of the Marvel Cinematic Universe. In case you forgot. For one second. And tried to do something else with your day. For once.

Sequel Thing Of The Day: Kingsman 2
Matthew Vaughn has confirmed that he’s working on a script for the sequel to Kingsman: The Secret Service, that movie that came out earlier this year about a secret service that’s held each year where all the kings get together and reminisce about feudalism. “Well, the good news is that I’m writing it next door at the moment,” said Vaughn, referring to how he breaks into his neighbor’s house each day to write, even though his neighbor has expressly asked him to stop. “If I think I can get the script good enough, then we are making it.” Vaughn also hinted that there might be a “new addition to the Kingsman team, alluding to an American agent appearing in the (proposed) sequel.” Might I recommend Ant-Man? Just kidding, that would be absurd.

Fictional Affliction(al) Of The Day: Selective blindness, as seen (or not) in the movie Look Away
Matthew Broderick and Chloe Sevigny will star with up-and-coming English actress Shannon Tarbet in Look Away, a movie based on what I do every time I see the words “new Ant-Man thingie.” It’s a dark comedy directed by Andy Delaney and Monty Whitebloom that follows Tarbet as an “offbeat young woman who is unable to physically see her mother due to a fictional affliction called selective blindness.” The conflicted relationships between mothers and daughters: a rich, untapped vein for storytelling.

Non-Graphic Graphic Novel Adaptation Of The Day: Fox Animation will adapt Noelle Stevenson’s Nimona
Fox Animation has picked up the rights to Nimona, the best-selling graphic novel by Noelle Stevenson. Nimona is set in a medieval future (kings at the Secret Service, are you guys listening?) where “knights go to night clubs riding hoverboards and carrying swords.” This kind of just sounds like normal Europe, to be honest. The film will “tell of a “young shape shifter who teams up with a disgraced knight in order to reclaim his honor and overthrow a corrupt regime.” Stevenson initially wrote Nimona as a web comic while in college; she’s since won Harvey and Eisner Awards for it and become very very rich and famous, like all talented women do. Patrick Osborne, behind the Oscar-winning short “Feast,” will direct.