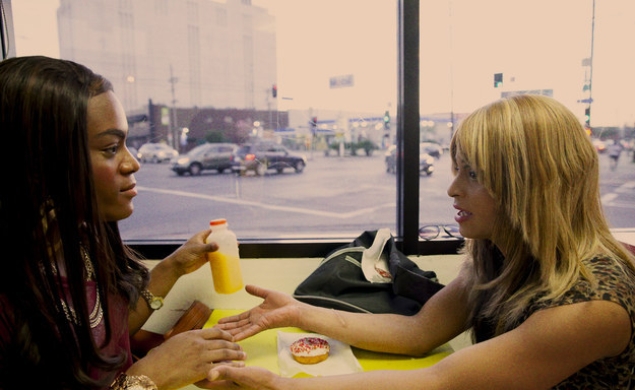 What did you do with your iPhone today, guys? Text your mom a picture of your new shoes? Play Candy Crush under your desk? Take a slow-motion video of yourself eating raw hamburger and tweet it at Russell Crowe? That’s cool. Sean Baker shot his forthcoming film, Tangerine, entirely on an iPhone.

“It started off like somewhat of a budgetary thing because I want to make films look good so I didn’t have the money to go with something like the Alexa or the RED,” writer-director Baker told The Film Stage at the film’s Sundance premiere. “So instead of going with something lower-end I decided to go with something completely different and make this film look very unique. [Executive Producer] Mark Duplass and I went back and forth about whether it was feasible or not or whether we could pull this off and make it look like a real movie.”

Based on the first trailer for Tangerine, the film’s got “unique” in spades: shaky but overtly stylish camerawork (er, iPhone-work?) that lends each shot a sense of energy and grit; a loopy, roller-coaster ride of a plot; and a couple of irrepressibly raucous protagonists, transgender prostitutes Sin-Dee (Kitana Kiki Rodriguez) and Alexandra (Mya Taylor), described by our own Mike D’Angelo as “several orders of magnitude larger than life, with Sin-Dee in particular so relentlessly loud and logorrheic that she makes Divine seem like Andy Devine.”

Here’s the official plot synopsis for Tangerine, not to be confused with Zaza Urushadze’s Tangerines, about an Estonian man tending to his tangerine crop, or 2008’s Tangerine, about an aspiring dancer in Tangiers, or Tangerine, the Canadian bank.

“It’s Christmas Eve in Tinseltown and Sin-Dee (newcomer Kitana Kiki Rodriguez) is back on the block. Upon hearing that her pimp boyfriend (James Ransone, STARLET, Generation Kill) hasn’t been faithful during the 28 days she was locked up, the working girl and her best friend, Alexandra (newcomer Mya Taylor), embark on a mission to get to the bottom of the scandalous rumor. Their rip-roaring odyssey leads them through various subcultures of Los Angeles, including an Armenian family dealing with their own repercussions of infidelity. Director Sean Baker’s prior films (STARLET, PRINCE OF BROADWAY) brought rich texture and intimate detail to worlds seldom seen on film. TANGERINE follows suit, bursting off the screen with energy and style. A decidedly modern Christmas tale told on the streets of L.A., TANGERINE defies expectation at every turn.”

The trail of the tape:
Title: Tangerine
Director: Sean Baker
Screenwriter: Sean Baker, Chris Bergoch
Cast: Kitana Kiki Rodriguez, May Taylor, Karren Karagulian, Mickey O’Hagan, James Ransone
Release date: July 10
The entire trailer in one line of dialogue: “Chester cheated on me with a real fish?” “Yeah, bitch, like a real fish, girl, like vagina and everything.”
The entire trailer in one screengrab:

Most Sundance-goers applauded Tangerine, citing its vibrant characters, acerbic dialogue, and big heart. The Hollywood Reporter called it a “singularly delightful girlfriend movie with an attitude,” while Movie Mezzanine noted, “this isn’t a social issue film, but one that happens to feature trans characters—which is what makes it so forward-thinking.” Mike was similarly won over by its eccentric charms: “Let me confess immediately that the opening minutes of this movie had me itching to flee the theater, in order to escape what felt like a frontal assault…Over time, though, these passionate, street-smart whirligigs grew on me, and by the end I was surprised by how fiercely protective of their fragile happiness I felt. The characters didn’t change at all—I changed.”

Personally, I can’t wait to see Tangerine. Both of the main characters are played by transgender women of color, which is depressingly rare in an industry that applauds cisgender actors for their “brave” portrayals of the transgender population. Also, Tangerine just looks fun as shit. Any film that begins with someone shouting, “Merry Christmas Eve, bitch,” has already won my heart.