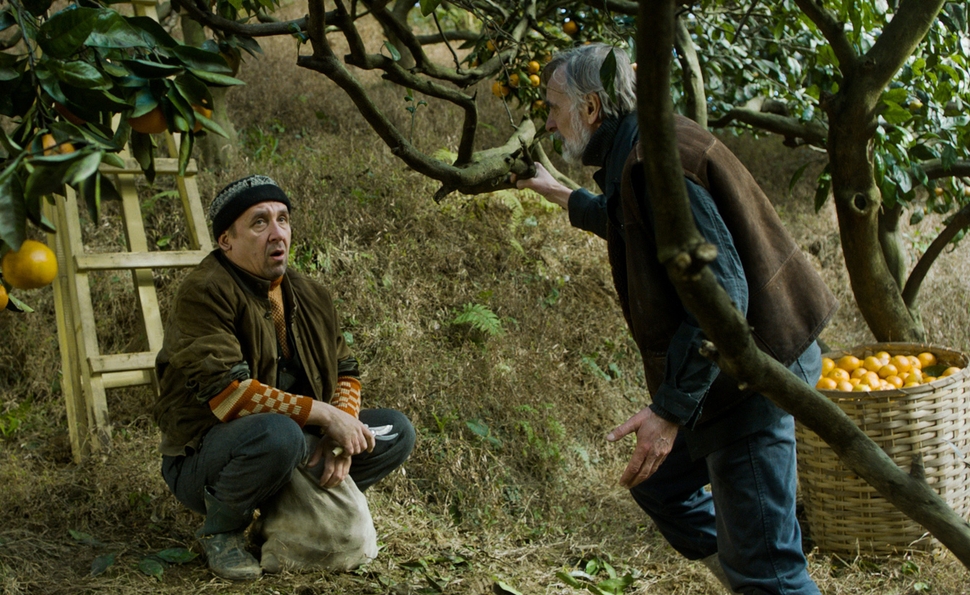 Hatred requires dehumanization. The more time people spend with their ostensible enemies—as equals, that is, not in unbalanced power dynamics like Auschwitz inmate/Nazi guard—the harder it becomes to perceive those enemies as wholly Other, and the more likely it becomes that empathy will start to kick in. That’s the hopeful message offered by the Estonian-Georgian wartime drama Tangerines, one of 2014’s foreign-language Oscar nominees. (Not to be confused with Tangerine, singular, the Sundance favorite about two transgender sex workers, due for release later this year. Apparently our cinematic diet needs more Vitamin C.) Too blunt and didactic to convey the futility of war with the complexity the subject demands, Tangerines works primarily as a showcase for its trio of lead actors, who work hard to make their characters’ gradual yet quick thaw seem not just credible, but inevitable.

Though the conflict between Georgia and Abkhazia is ongoing (broadly similar to the situation between China and Tibet), writer-director Zaza Urushadze chose to set his film in 1992, during the yearlong all-out war that saw Abkhaz separatists hire Chechens to help in their fight for independence. Estonians also inhabited the region back then, and while most fled to Estonia when war broke out, a few, like Ivo (Lembit Ulfsak), chose to remain, doing their best to keep their heads down. Elderly and apolitical, Ivo doesn’t hesitate to take in a wounded Chechen soldier named Ahmed (Giorgi Nakashidze), the apparent sole survivor of a skirmish that breaks out near his home. While burying the dead, however, Ivo discovers that one Georgian soldier, Niko (Mikheil Meskhi), is still alive, and nurses him as well. Ahmed and Niko both immediately declare their intention of killing each other, but each gives Ivo his word of honor that he won’t do so while he’s a guest in Ivo’s house. Instead, the two men just taunt each other nonstop, with Ahmed constantly questioning Niko’s masculinity, and Niko forever characterizing Ahmed as an ignorant hick.

As a writer, Urushadze isn’t exactly subtle. The movie is called Tangerines, for example, because Ivo’s next-door neighbor, Margus (Elmo Nüganen)—another Estonian—grows tangerines for a living, and spends a lot of time fretting that this year’s crop, which has just ripened, will go to waste because he lacks the manpower to harvest it. Is there anything else that seems in danger of going to waste? Human lives, perchance? Urushadze also slaps a mournful orchestral score (by Niaz Diasamidze) onto numerous scenes that don’t require nearly so much emotional prodding, and he shoots the interior scenes in a slapdash fashion that fails to spatially reflect Ahmed and Niko’s evolving relationship. The film could very easily be converted into a stage play, though it wasn’t adapted from one. It wouldn’t look terribly different.

With these three actors playing the roles, however, it’d be a pretty good night at the theater. Ulfsak, who has film and TV credits dating back to 1969, makes Ivo an exasperated referee, mining gentle comedy from a circumstance that isn’t inherently funny. (Though the no-killing-indoors rule does recall the Buster Keaton comedy Our Hospitality, which finds Buster trapped in the home of a family with which he’s feuding—they can’t kill him until he sets foot outside.) Meskhi, as Niko, communicates mostly through death glares rather than words, to surprisingly chilling effect. And Nakashidze, who has the toughest job of all, not only pulls off Ahmed’s transformation from bloodthirsty zealot to humanitarian (over the course of just a day or two), but somehow makes that noble trajectory look truly badass. Plus, it’s hard not to be moved, at least to some degree, by any story that insists we’d all put aside our differences if we only were forced to see each other as people rather than obstacles. Sometimes the truth is a little corny.