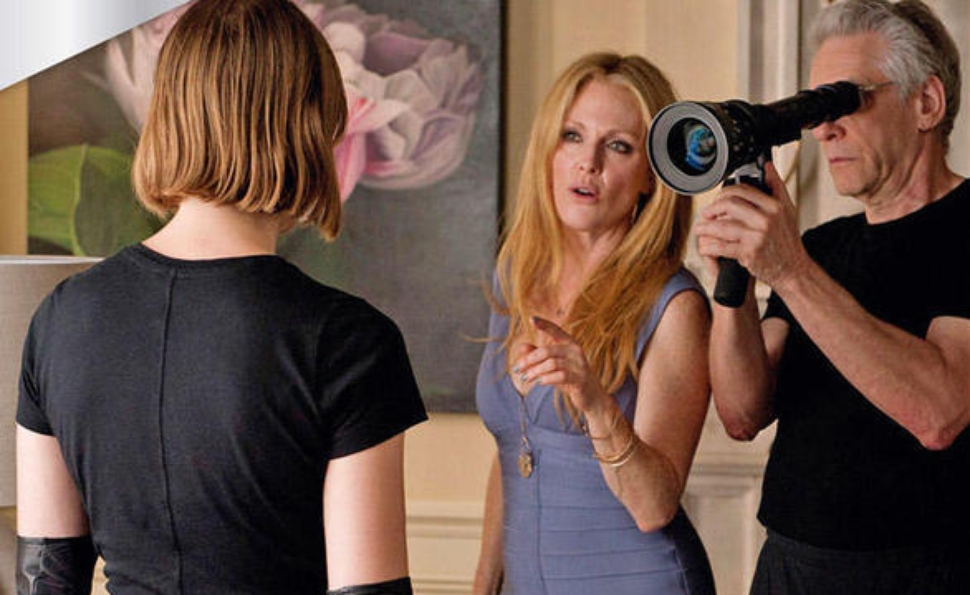 David Cronenberg on the Hollywood horror of Maps To The Stars

It’s easy to follow the line of David Cronenberg’s career. The Canadian director began as a disreputable purveyor of taxpayer-funded genre films whose obsession with physical decay birthed a subgenre—“body horror,” which Cronenberg himself routinely rejects. Movies like Naked Lunch and Crash, while not exactly hits, burrowed into the popular imagination, often stoking mild furors of controversy. Then came his apparent shift into respectability: In the 2000s, Cronenberg turned to the likes of A History Of Violence and Eastern Promises, abandoning exploding skulls and mutating torsos in favor of subtler horror.

In the beginning, he was regarded as a national disgrace back home—“You Should Know How Bad This Movie Is, You Paid For It” declared a headline in one of Canada’s largest magazines when Shivers was released in 1975—but now that he’s been validated by international festivals, his trash is being embraced as a national treasure. The irony is that David Cronenberg never really changed. He’s still fixated on the same themes, still scrutinizing sex and violence with the same vigor and sophistication—only now he’s doing it without the genre cloak. A History Of Violence bristles with scorched flesh and luridly shotgunned appendages; Cosmopolis boasts a prostate exam that doubles as a sex scene and existential manifesto. Has the master of vulgarity cleaned up? Hardly.

David Cronenberg returns to American theaters this week with the long-delayed release of his latest oddity, Maps To The Stars, nearly a year after its world première at the Cannes film festival. His most divisive feature since, well, since the last one, Maps is beguiling. Part comedy, part tragedy, and all shot through with the grandeur of an epic, it’s a film without precedent in Cronenberg’s filmography, yet it feels very much of a piece with it. The Dissolve sat down with the filmmaker in Toronto, in the middle of two simultaneous press tours: for Maps and for his debut novel, Consumed, which hit bookstores the same week.

The Dissolve: Here’s a paraphrase from my favorite review of Maps, from Mubi critic Miriam Bale: “Bruce Wagner wrote this film as a broad comedy, but it isn’t directed that way.”

David Cronenberg: It’s almost true. There are elements that are broad comedy, but I can quote [Maps star] Julianne Moore, in fact, who said she thought Bruce’s extreme hyper-emotionality and humor and my cool, neutral observational direction made a really good combination. And I think that’s sort of a more detailed version of what this critic was saying. If you had a director who really went with that other stuff, you would get a very over-the-top, exaggerated, and to me, maybe a false movie instead of what it is—which is still funny. But the humor comes from within the characters, from the observation of the absurdity of the human condition, rather than a sort of self-parodying thing, or something that you could’ve done with it. And I think that’s correct.

The Dissolve: So you’re fighting against that aspect?

Cronenberg: I mean, in a way… I remember Truffaut saying all those many years ago, as a director, you would direct against the script. And then, when you’re editing, you edit against the directing, you know? And it’s really trying to find a balance. It’s a tricky thing. You don’t just go with one tone and do that at every part of the process, you have to have balances and checks and so on to come to something interesting. And in this case, particularly, I think you would lose some of the real… Well, there’s a sort of sadness at the heart of the film, which you would lose if you did it as an absurdist comedy only.

The Dissolve: That’s especially noticeable in the tone of the film, which is at odds with the tone of the script on paper. And even the way the music plays against the scenes—it’s more plaintive and somber.

Cronenberg: That’s right, that’s right. And that’s often how Howard Shore and I work, because so much movie music is hammering you over the head with what’s obviously there in the scene, you know? So if it’s a sad scene, you get sad music. If it’s a suspenseful scene, you get suspenseful music. Sometimes, you get music that is trying to put some emotionality into the scene that isn’t really there, and then people realize it’s not there, and they try to make up for it with the music. And Howard and I never have done that in all the films we’ve done together, which is many. We’ve always felt that the music should be another level, an added level to the film, that brings in an element that actually wasn’t there, and wouldn’t be there without the music. But it needs to be accurate, not just imposed—it’s a part of it. And we were puzzled by this movie. You know, we said, “Okay, what would the music be, you know?” There are many ways you could go. You could go retro and do old Hollywood music, for example, which would be more like the broad comedy version.

Cronenberg: Yes. But, of course, we felt immediately that would be false. And so we came up with music that was, to our surprise, very similar to our approach to Cosmopolis, which is that the music is almost an ambiance, it’s almost like traffic noise or air-conditioning noise. Almost a sound effect rather than music. And that’s what we ended up with.

The Dissolve: In Cosmopolis, that vaguely artificial quality is very much of a piece with the book. It’s a very sleek, compact novel, but there are layers of irony and distance.

Cronenberg: Yes. I agree with you.

The Dissolve: In this film, there’s more tension in that approach. More friction.

Cronenberg: I agree with you. And that’s why we were surprised, because this movie is not stylized, not artificial deliberately the way Cosmopolis was. And yet the same approach to the music seemed to work. It seemed to be the only way it worked, even though it has a very different effect, because in Cosmopolis, the emotion is quite distant from you, as an audience, because these characters are so distanced from you. And in Maps, the emotion is really quite there, quite close, especially toward the end. It becomes obvious. And then the music works in a different way, but it’s still the same approach to the music. So yeah, it’s an unusual thing. It was kind of a puzzle for us.

The Dissolve: I’ve never felt as unmoored with your films as I was watching Maps. I could never really get a firm position on how I was supposed to be responding to it.

The Dissolve: Is the ambiguity deliberate?

The Dissolve: I’m a sucker for puns.

“I feel it’s part of the art form to not be pointing to the direction you’re supposed to go as an audience.”

Cronenberg: I am too, I’m sorry. I suppose I must say, in all my movies, I feel it’s part of the art form to not be pointing to the direction you’re supposed to go as an audience. And it’s very opposite to the Hitchcockian approach, which was that he is a puppeteer, manipulating the strings of the audience, and he’s pulling every string at every moment, and getting everybody to do what he wants. He was controlling every action. I don’t want to control every action. I really want there to be a kind of free-floating potential for reaction that will be quite different for different people and different audiences. And that, to me, is always the approach. And it’s very significantly the approach to Maps, in that there’s a mixture of stuff, because it is funny, it is emotional, it is nasty, it is shocking, and it is sad. And there’s a melancholy there, too. It’s all of those things. And any of those emotions could emerge at any moment, depending on who you are, you know?

The Dissolve: I think all of your films, to some extent, are comedies. But not on the overt level. Benjie’s jokes, I don’t find funny.

Cronenberg: Yes. Neither do I.

The Dissolve: But I find those scenes very funny.

Cronenberg: Yes, exactly. That’s Bruce. You know, that’s Bruce’s writing, and that’s undoubtedly one of the attractions for me, for the script, was that I was going to do stuff I had not done before. And it’s so rare that you find a project like that. That’s why, for 10 years, I’ve been trying to get the movie made, because I knew it would put me… You know, we’d be making a movie that neither Bruce nor I had seen before, really, without being too overly confident. But we feel that on a small way, we’ve done that.

The Dissolve: To what extent is the film meant as a Hollywood satire?

Cronenberg: Well, Bruce and I, we both agree it is not a satire. And for me, being a kind of literary pedant, I insist on the true meaning of satire, which is Jonathan Swift and “A Modest Proposal.” That’s satire. It’s really nasty. It is a deliberate attack on a particular human frailty, and it’s usually fantastical in form. To me, that’s a real satire. This movie, we feel, is too realistic to be satire. I mean, Bruce swears that every line of dialogue in this movie, he has heard spoken, so how can it be a satire? I mean, it can be a comment on the absurdity of the human condition in Hollywood, but that doesn’t make it a satire, if it’s real.

I’ve had so many reactions from studio people, other directors, actors, who said this is their life. So you can’t really say it’s a satire. I think the understanding of what a satire is has become very deluded, and people use that term to mean something that’s sort of nasty, maybe witty, and also kind of funny. To me, that’s not enough to make it a satire. A satire is usually pretty darn savage.

The Dissolve: And a specific attack on one thing.

Cronenberg: It’s a deliberate attack on a very specific thing, and this is more, you know. You feel it’s an attack on Hollywood, maybe, but ultimately, it’s not Hollywood, it’s a commentary on the human condition that could’ve been set in other places.