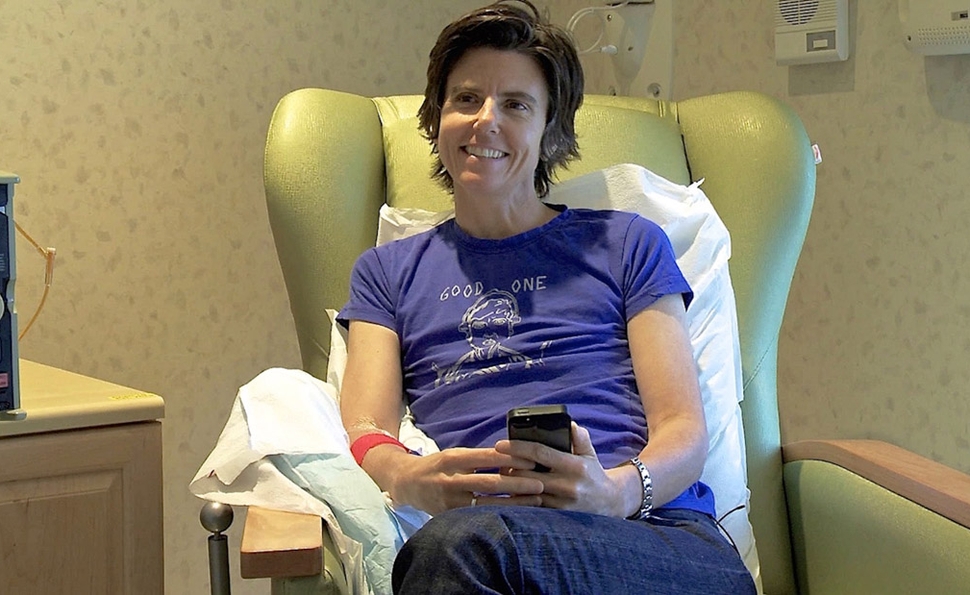 2012 was a legendarily bad year for deadpan stand-up comedian Tig Notaro. In short order, she endured a life-threatening bacterial infection and the accidental death of her beloved mother, she was dumped, and she learned she had breast cancer. Notaro famously exposed all that and more during an instantly iconic set at Los Angeles’ Largo theater. By the next morning, her confessional, hilarious, heartbreaking set had gone viral, rocketing her to fame during inarguably the worst period in her entire life.

Kristina Goolsby and Ashley York’s funny, honest documentary Tig picks up after Notaro’s diagnosis and charts her ups and downs, professional and personal. As the feature explores Notaro’s quest to get healthy, get back onstage, and basically just get busy living, she keeps her good humor. She also falls in love onscreen, like something out of a classic romantic comedy, with her now-fiancée Stephanie Allynne, who also stars in the festival première People, Places, Things. Notaro recently sat down in Park City, Utah at the Sundance Film Festival headquarters (with Allynne present) to talk about putting their love story on the big screen, the pitfalls of fame, and why Notaro’s ultimate statement about who she is simply involves living her own life.

The Dissolve: Your love story forms a large part of the film. Would you ever be interested in turning that into a narrative feature?

Tig Notaro: It’s such an interesting part of the movie screening, people knowing our story. The feedback we’ve gotten so much of is like, “I want to know how everything keeps going! And I want to be your friends!” It’s interesting, we’ve never talked about it, but we have talked about working together.

Stephanie Allynne: But it is weird how our relationship sort of played like a romantic comedy.

Allynne: And it’s weird, because in a romantic comedy, it’s almost like you’re watching two people that aren’t together, and then at the end, they’re together for life. And I feel like for myself, every time I watch it, I’m like, They’ve never even kissed! That’s not how life works.

Notaro: But you said that our relationship changed your feelings.

Allynne: Yeah! And now I watch those movies, and I’m like, “I get it, totally.”

The Dissolve: [To Tig.] You say in the film that you expected to die from your cancer, especially given how quickly and badly everything snowballed in your life. Did you imagine this film would be an artifact of your life, if you’d died while making it?

Notaro: No, because this film started after I’d had my surgery. But I do have moments where, in my life now, and now that I’m in a good place—I’m still editing my book, I have this documentary coming out, I’ve had health scares since I was diagnosed with cancer—and I’ve had things come up where I go, “Oh my God, my book isn’t finished. If I die…” And then I’ll be like, “Luckily, the documentary is finished.” Because it is weird to be in the public eye and have to worry about those things.

I didn’t make the documentary for that, but in the middle of that press storm that was happening [in the film], I was sitting in interviews, thinking, “Oh, they want to talk to me because they think I’m going to die, or they might get my last interview.” Or, “Am I going to be alive when this airs?” My head was spinning.

The Dissolve: So much of the film deals with fame, and the idea of fame. How famous did you want to be before this happened?

Notaro: I am in the best and worst position possible, because it’s so complex. I love doing stand-up. I love telling stories and performing. And I’ve never claimed to be an actor, but I enjoy doing that. But I don’t enjoy—I have such a fantasy of, “Okay, once this chunk of time is over, I just want to have family, and I want to have a local show at Largo once a month.” But it’s just not going away, it’s not settling down. And so I don’t know how to navigate. But then I’m in a great position, because I’ve been able to be helpful to people. So I don’t want to get rid of that. It’s fun to get accolades, but I’m not, I don’t need [them], I don’t.

I have so many projects that I’m so happy and proud of that are going to be surfacing, and then I’m going to have to do more press, but I’m never like, “God, I can’t wait to go talk about myself, and I can’t wait to get my picture taken!” I leave my show, we go home, and we are so excited to be at the house, and cook dinner at home, and not at restaurants. We love just being at home together.

The Dissolve: You seem remarkably composed throughout the film. There’s never any big breakdown scene, which would be the sort of thing we might expect from a narrative version of this story.

Notaro: I didn’t. There was some point in time when I really thought I was going to have a nervous breakdown. And I remember feeling out of control in my head, and it was kind of heading toward my body, too, and I was like, “What is this going to look like? Am I just going to start screaming?” That time period was just very—obviously, I’ve shared a lot about my life, but I’m not somebody that runs to everyone, “I need help!” It was a bizarre time, because I was very emotionally and physically drained, and in pain, but I also wanted to explain my show and what I was going through. It was 30 minutes of jokes, but I had so much more to say about what was actually happening.

The Dissolve: Were you ever able to forget that there were cameras on you?

Notaro: No! It’s impossible. You can get more comfortable with it being there, but when something very exciting is happening—like when I saw Stephanie after the Grammy interview, I was so excited to see her, but I was aware I was on-camera. But inside, I was just so excited.

Getting bad news, rough moments, I’m aware, but I want to give to the film, because I committed to doing it. I was willing to share the good and bad moments.

The Dissolve: You and Kristina Goolsby are long-time friends, too. If someone you didn’t already know had approached you with this idea, would you have done it?

Notaro: I don’t think so. I think, in those very intimate moments, I probably would have been like, “Can you—I’m not going to reveal this part.” But because Kristina was there, it really allowed them to get in, and they did.

The Dissolve: Did you watch any other documentaries in preparation for this experience?

Notaro: I love documentaries. I watched the documentary Bridegroom; it is so good. And it is not fancy, there is no animation, it is almost strictly talking-head, but the story is so compelling and heartbreaking. When I saw that movie, it gave me such clarity about this film that I thought—not that I don’t want for it to be interesting to look at—but I realized in watching Bridegroom that as long as there is a very strong story, then you’re in really good shape. Because I was watching their documentary like, “Wow, this is not visually impressive at all, but it is so emotional. It is so emotional.”

The Dissolve: At the Q&A after the film’s première, someone asked you about making a larger statement as it applies to cancer or sexuality, and you said your statement on those things is just you living.

Notaro: Well, I’ve always kind of been faced with that, “What’s it like to be gay? A gay comedian? A female comedian? Cancer?” and I’m just not the person who, I want to say “that makes statements,” but obviously I do make statements.

I don’t know if I talked in the Q&A that night about my love for Chrissie Hynde, the lead singer of The Pretenders. I just love her. When I was 15, I was listening to this radio show called Rockline, and I had only been into John Lennon and Willie Nelson and Eddie van Halen, but I heard this woman on this radio show, saying, “I’m so sick of people being like, ‘Oh, I’m a woman, I can’t do it, I’m gay, I can’t do it, I’m black, I can’t do it,’” and she’s like, “Just shut up, just go do it.” And I remember just being like, “I love that!” And she was like, “I don’t want to be the best female guitarist or the best female singer, I want to be the best.” It spoke to me. I was like, “Yeah, me too! That’s how I feel!”

Go be funny! I was at a dinner once with all these female comedians, this woman sat down next to me, and she was telling me this story, thinking I was going to be like, “Yeah!” And she said, “It was an all-female lineup, and then the club put a guy on, he walked in and they let him do a set! It was supposed to be an all-woman lineup, and then he went up there and started bashing about how women aren’t funny, and then I went up there and just ripped him apart!” And I was like, “Why don’t you just go up and be funny? That proves him wrong. Just go be funny. Just go do it.”