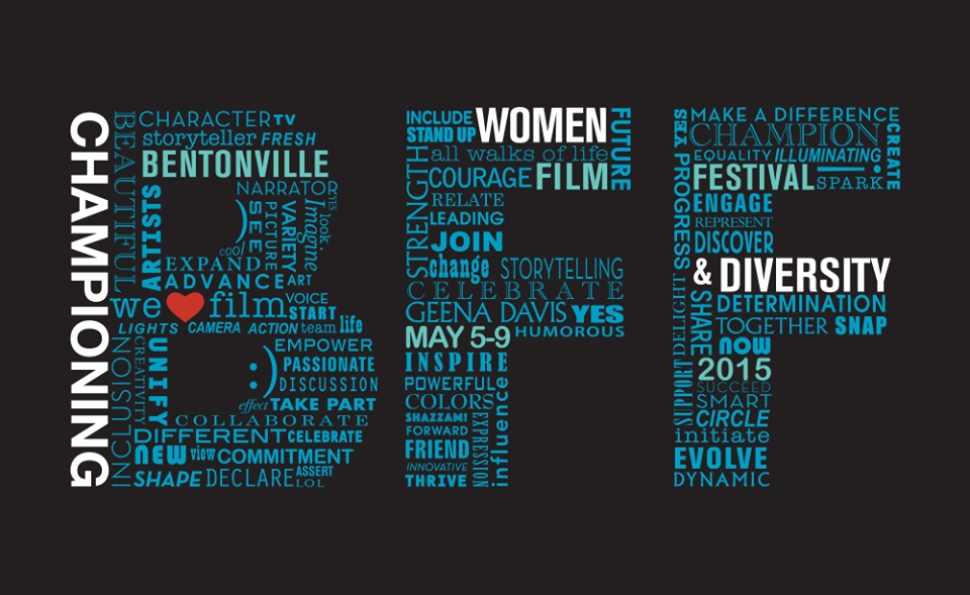 The Bentonville Film Festival guide is filled with hearts. Each page number appears inside a tiny red heart, and the festival’s official logo—a big “BFF” made out of various buzzwords like “evolve” and “storyteller,” which conjures up all sorts of friendly associations—features a heart at its center. But the paper program doesn’t just use the hearts for cute decoration. It offerings them as a way to mark which films adhere to the newbie festival’s mission: “championing women and diversity in film.” A red heart means a film features women and minorities in lead roles or “primary film functions,” like director, screenwriter, or producer. A purple heart indicates that either women or minorities held lead roles or served in primary functions. A white heart edged in red denotes a film that features at least 50 percent “combined representation of women and minorities in supporting cast, below the line crew of extras.”

Hearts aside, there’s also an “intensity level” scale that measures “the degree to which women and minorities were involved across the entire film project.” Ten is the highest score. This year’s BFF—the first in what has already been designed and announced as an annual event—hosted 60 films. None of them earned a 10 on the festival’s own scale, though two films, Regina King’s drama Let The Church Say Amen and the documentary Meet The Patels, earned nines, plus a tiny red and white heart apiece. But there are plenty of other hearts filling the pages of the program, and each film boasts at least one. The really good ones have two.

The Bentonville Film Festival was only announced in January 2015, when Geena Davis—actress, Oscar-winner, and founder of the Geena Davis Institute On Gender In Media—proclaimed its intentions to champion both women and minorities (the festival bills it as “women and diversity”), the kinds of talents that are typically underrepresented in the media and entertainment, and especially in film. Moreover, the festival promised to reward three of its eventual winners with something unique and tangible: distribution deals. The festival’s goals are certainly lofty, and Davis’ intention to launch the festival within mere months was ambitious. But the first annual BFF rolled out last week, both perfectly on schedule and neatly aligned with its touted mission.

The festival’s spot on the calendar is a good one—early May, before summer-blockbuster season really heats up. It was refreshing to take in day after day of movies that place a premium on family dynamics without being part of the Fast And Furious franchise, and features where the sexualization of teens isn’t celebrated, but actually feared (as is the case with the funny Now Add Honey). There were lots of love stories, like the charming Big Stone Gap and the totally disarming A Brilliant Young Mind, which addresses autism with sensitivity and understanding. Music was a binding thread: the film’s closing-night film was Pitch Perfect 2, but smaller features like Jackie & Ryan rely on music just as much, if not more.

Films about religion frequently dotted the calendar, from the romance-minded Love Finds You In Charm to the more redemption-bent Gallows Road. Although the festival isn’t specifically family-driven, the BFF offered up lots of solid family fare, from an animated feature about a kind-hearted bee (Maya The Bee Movie) to more teen-centric offerings like Dear Dumb Diary and the Kiernan Shipka vehicle Fan Girl. Documentary features leaned toward the inspirational, from A Brave Heart to A Ballerina’s Tale. Even with 60 films and tight eligibility constraints, the festival offered a surprisingly deep listing of features to pick from, all chosen because of their adhesion to the BFF’s specific rules.

Another thing setting Bentonville apart from other fledgling fests is the presence of big-name (and big-money) sponsors, even in just its first year in existence. Davis is the festival’s face, but she shares her co-founder title with Trevor Drinkwater, the CEO of Arc Entertainment, and the first annual outing was sponsored by corporate big guns like Walmart and Coca-Cola. (The BFF takes place in Bentonville because the Arkansas town is Walmart’s home base, and the company’s influence is felt on every corner. Even the town’s old-fashioned soda fountain is attached to the Walmart Museum.) A visit to the festival’s so-called “Sponsor Village,” just a stone’s throw from Bentonville’s charming town square (where said Walmart soda fountain is located), promised a tour of the Oscar Mayer Wienermobile and free products from Perrier, Mars, and various Kraft brands. On deck the first day: Easy Mac, gussied up with Oscar Mayer hot dogs. Synergy at its junk-food finest.

The BFF proudly proclaims its missions and intentions at every turn. This is the kind of festival where each screening includes the showing of at least five pre-film bumpers—nifty sponsor packages crafted entirely to perpetuate the festival’s cause, and detail how said sponsor adheres to it. From SeeJane.org to Kraft, Walmart to Coca-Cola, each screening opened with nearly 10 minutes of supplementary material, repetitive for viewers burning through three screenings a day, but enlightening nonetheless. All that big corporate branding might sound like an awkward fit for a festival about underdogs, but by the fifth viewing of a pre-packaged piece on Kraft’s Women In Sales group, it makes a little more sense. (The company boasts a workforce that is 35 percent female, and only women speak in the taped bit.) If nothing else, those big corporate sponsors mean big bucks, and that’s essential to any solvent film festival, not just the new ones.

The festival is uncompromisingly metric-driven—those hearts weren’t just invented, after all—and its admirable aims are present in every film offering, most even without the added benefit of a program that lays out such clear numbers. This is a festival that walks the walk, and those hearts and “intensity level” scores most definitely aren’t just for show. With just one festival under its belt, the BFF will hopefully keep growing over time, but its first outing was something to love, hearts and all.