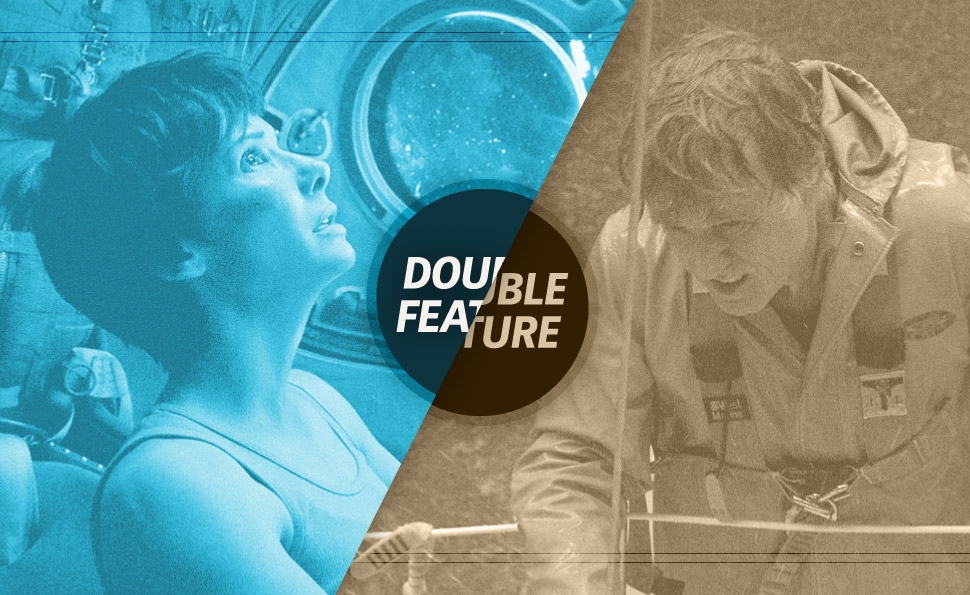 “So what do you like about being up here?”

“The silence. I could get used to it.”

Amen to that, Sandra Bullock. That exchange between gregarious veteran Lieutenant Matt Kowalski (George Clooney) and neophyte engineer Dr. Ryan Stone (Bullock) takes place in the brief calm before all hell breaks loose in Alfonso Cuarón’s Gravity, when the astronauts are drifting around in open space, tinkering with repairs. Just the line, “The silence. I could get used to it,” has seven more words than are ever spoken onscreen, beyond a distress call, in All Is Lost, J.C. Chandor’s adventure about a yachtsman dealing with catastrophic damage to his boat in the middle of the Indian Ocean. (Chandor and his leading man, Robert Redford, sure make that one word count, though.) Seen back to back, Gravity and All Is Lost are a fascinating study in the kinds of information, visual and aural, their directors have chosen to include in what’s essentially the same story of one person, against long odds, fighting for survival in complete isolation. And just as their wits are tested, so are the filmmakers’, who are aiming for different types of simplicity and have a disparity of resources at their disposal.

I’m generally not the type to tell filmmakers how their films might be improved, but playing Dr. Frankenstein with Gravity and All Is Lost is just too irresistible. Both films landed outside my Top 15 list for 2013, but had a single film combined the visual dynamism of Gravity with the rigorous minimalism of All Is Lost, it would have been No. 1 with a bullet. The milieu almost wouldn’t matter—I might prefer the debris storms of Gravity over the rainstorms of All Is Lost, but both can be thrilling and beautiful in the right hands. (In fact, the great experimental documentary Leviathan, about life aboard an industrial fishing boat, has a visceral pop that might split the difference.) The strengths and weaknesses of both films are entirely complementary, and impress the point that less is often more, at least in terms of the scripting. Anything that can’t be said with the camera is a distraction.

Now back to that line about silence. It wouldn’t be accurate to call Gravity a “talky” film, even though it’s over-scripted, and Cuarón uses silence as a potent tool in the arsenal, occasionally dropping out all dialogue and effects in order to emphasize the merciless hush of the heavens. It’s also important to note that sometimes the chatter is just that—chatter—there to create a nervous energy more than manufacturing drama. From the opening shot, Cuarón establishes a foreground/background dynamic that holds true for most of the film: There’s this majestic shot of the Earth from space, engulfing a teeny-tiny astronaut gliding into the frame, with the chatter on his radio barely audible until he’s more fully in view. What he’s saying matters little; his words are but a ripple on an infinite pond. And though viewers learn things about Stone that do become pertinent later—arguably to the film’s detriment—the dialogue is by no means ruinous to Gravity on the whole, which is so thoroughly an IMAX, 3-D, buy-the-T-shirt experience that my colleagues and I took to referring to it, not unkindly, as Movie: The Ride.

As it happens, both films have backstories, even though Stone’s has rightfully taken the most criticism. In All Is Lost, Redford’s unnamed sailor, referred to as “Our Man” in the closing credits, writes a letter to family under the expectation that he won’t survive his misfortunes at sea. Chandor plugs the letter into the voiceover at the very beginning of the film, as a pretext to the adventure that’s about to unfold, and leaves it at that. The audience learns that he isn’t perfect guy, that he feels he has something to atone for, but Chandor doesn’t press the issue any further. All Is Lost is basically a movie about a guy with a big hole in his boat and the steps he takes to gets himself out of that and other jams. Within that narrative framework, he and Redford do manage some subtle character work, but they can only sketch within the limits they’ve smartly allotted themselves. In one of my favorite moments of the movie, Our Man stops to shave in the minutes before a storm that will surely test his wounded boat, and it says a lot about his calm, almost defiant adherence to old habits and rituals, even in the face of death.

Stone’s backstory is more of a problem, mainly because it’s the one superfluous element in a movie otherwise wholly devoted to spectacle and in-the-moment experience. Gravity will never be confused with 2001: A Space Odyssey or Solaris—it has its themes, but it also isn’t using space as a motivator for philosophical disquisition. Stone’s talk about her home life and the daughter she lost ostensibly makes her survival more important—“You tell her that I love her. And I’m not quitting,” and so on—but if there’s any film that doesn’t need to give its characters additional motivation to stay alive, it’s one in which an astronaut is hurtling desperately through space. When Stone nearly passes out from lack of oxygen, fends off a fire in the International Space Station, or climbs into a capsule with a control board entirely in Chinese, the stakes are plenty high. Would anyone be less invested in Gravity if we know absolutely nothing about Stone’s life on Earth? 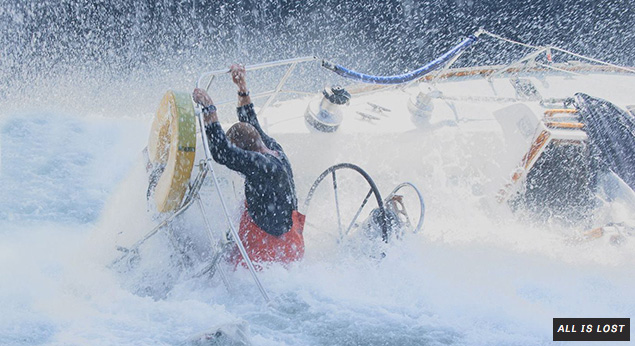 Where both films excel—and what makes them an ideal double feature—is simply in showing how their heroes cling to life, scraping and clawing and improvising their way through setback after setback, with death nipping at their heels. And while both are equally determined, they’re a study in contrasts: Redford, the seasoned yachtsman, treating a catastrophic breach in the hull with the same methodical process he’d use for rigging a sail on a breezy afternoon. Bullock’s Stone, having just six months of training under her belt, nearly hyperventilates her oxygen supply away before figuring out how to jettison herself to safety. Her journey is a combination of resourcefulness, ingenuity, and plain ol’ eeny-meeny-miny-moe luck. At times, she seems as passive as the audience watching her, which speaks as much to the impossible extremes of space as it does her amateur status.

There’s no doubt that All Is Lost—simple, disciplined, process-oriented, exceptionally subtle in small ways—is the least-flawed of the two movies, thoughtful and perfectly proportioned. And yet it’s also the least artful, the least expressive, the least singular in pushing a popular form as far as it can go. The quibbles over Gravity are legitimate—the talkiness, the backstory, the excess clatter—but Cuarón has the deeper challenge of squaring the needs of a commercial Hollywood spectacle with an impulse to create great art. It may not be advisable to hit the mute button while watching Gravity, because the sound and score are critical to the film’s overall impact, but just holding the camerawork and visual effects in isolation is enough to appreciate the breathtaking fluidity with which it’s been put together. Underneath those layers of noise—some of it welcome, some superfluous in a way that would utterly ruinous to a movie like All Is Lost—there’s a silent ballet.

I could get used to it.