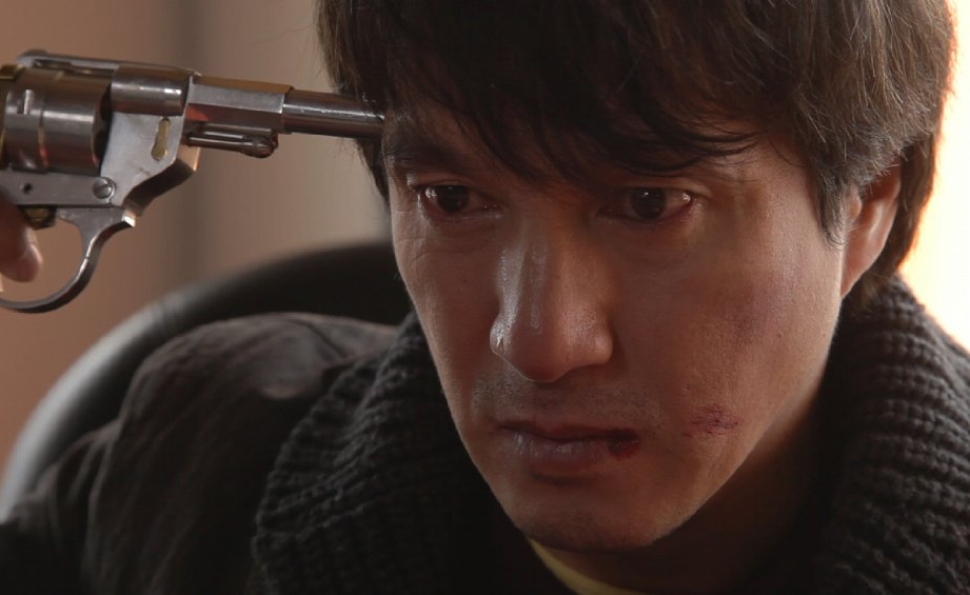 There’s no point in burying the lead, so let’s get right to it: Moebius is a movie about severed penises. Yes, plural. Violent schlong-removal is only one aspect of the film’s psychosexual perversity, actually, but that’s hardly important. A movie that could more accurately be called Dickless either sounds up a given viewer’s alley, or it decidedly doesn’t. The only pertinent question might be whether it’s a deadly serious film about coping with a sliced-off Johnson, or whether it’s meant to be a sick black comedy. As is often the case with singular Korean director Kim Ki-duk, however, that’s a trickier question to answer than it first appears.

A bare description of the story certainly sounds plenty ludicrous. Incensed by her husband’s infidelity, a mother (Lee Eun-woo) attempts to take revenge by hacking off his errant member with a huge knife. When the father (Jo Jae-hyeon) prevents her, she decides to punish him by proxy, using the knife on the penis of their only son (Seo Young-ju) instead. Can it perhaps be reattached? No, because she eats it before fleeing into the night. So the father, feeling responsible, has his own penis surgically removed, in the hope that it can be transplanted between the son’s legs. Meanwhile, the father’s mistress (also played by Lee Eun-woo, but looking nothing like the mother) deals with repeated sexual assaults by a gang of teen bullies—including the son—and winds up seducing the leader so she can, yes indeed, turn his hard-on into a hard-off. Thus deprived of conventional sexual responses, all of these men begin experimenting with alternative forms of pleasure, from a man abrading his skin with sharp stones, to someone having a woman tenderly jiggle a knife she’s plunged between his shoulder blades.

There are no names in the synopsis—just “mother,” “father,” and “son”—because nobody in Moebius ever speaks so much as a single audible word. Kim has made fundamentally dialogue-free films before (notably 2004’s 3-Iron), favoring silence whenever language would undermine his characters’ primal emotions and irrational behavior; in this case, the device also lets him avoid imagining some truly insane conversations. There’s more than enough insanity here as it is. At its best, Moebius plays like an unusually artful Troma picture, trampling propriety and good taste with gleeful exuberance. From a desperate struggle to retrieve one severed dick from the middle of the road before it gets squashed by a passing car to the father’s plaintive Google searches for “orgasm no penis,” the film has as much fun as possible with its demented premise. Some scenes can be difficult to watch (anyone with an abrasion phobia, if that exists, should stay far away), but the actual dismemberments, so to speak, thankfully take place out of the frame.

Prankster though he sometimes is, Kim is never merely kidding around. There’s a poignant undercurrent to all this extremity, which is weirdly admirable, even though it isn’t terribly effective. On some level, Kim genuinely means to explore the masochistic nature of desire and its destructive influence on the family; his approach isn’t as aggressively absurdist as J.G. Ballard’s conflation of sex with auto wrecks in Crash, perhaps, but he’s tilling roughly the same field. The harvest might have been more fruitful were his treatment of women not typically problematic—both mother and mistress exist solely to wreak penile havoc after being wronged by men, with no symbolic identities of their own. Nor does he really come up with an ending, merely twisting the story back on itself in the shape suggested by his chosen title. Following the self-importance of recent (and inexplicably prizewinning) films like Arirang and Pieta, however, Moebius feels like a giddy, playful return to form. It’s as uproarious as genital mutilation gets.