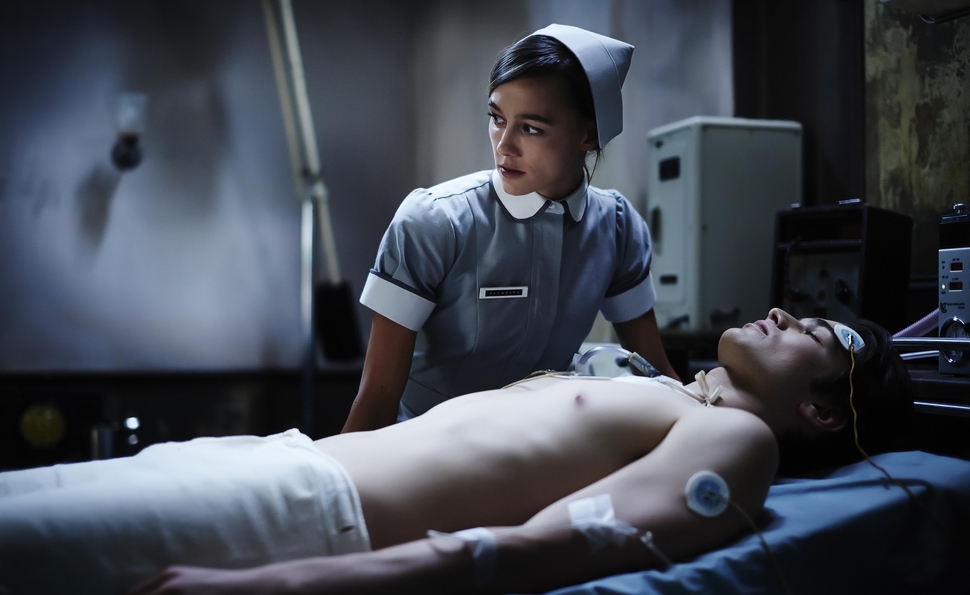 Pino Donaggio and telekinesis go together like bacon and eggs. Three decades after scoring Carrie White’s psychic rampage, the 72-year old Italian composer is back at it with the soundtrack to Patrick: Evil Awakens, a new version of a vintage Australian shocker by Richard Franklin. With its shrill, shrieking strings, Donaggio’s score sounds like a throwback to the 1970s art-thriller era that produced Patrick in the first place; ladled generously over the action by director Mark Hartley, it lubricates what could have otherwise been a stiff exercise in genre homage.

The eponymous antagonist (the mostly immobile Jackson Gallagher) is literally a stiff: Upon first encountering him lying on a private-clinic slab in a private clinic, nurse Kathy (Sharni Vinson) assumes he’s a corpse. But Patrick isn’t dead, merely comatose, although Kathy suspects he sees and hears more of what’s going on than the doctors and staff—including sinister neurologist Dr. Roget (Charles Dance) and his Frau Blücher-esque chief of staff Matron Cassidy (Rachel Griffiths)—will readily admit. Patrick is, in fact, paying very close attention to what’s going on around him, especially to Kathy, whom he takes a shine to.

She likes him too, but more in a pitying sort of way, whereas Patrick is in love. He’s also in a unique position to act on his feelings, since he has the sorts of mental powers usually associated with the X-Men: Like his predecessor in Franklin’s film, he can move objects and control thoughts. Hartley and his screenwriter, Justin King, have added a 21st-century twist, which is that Patrick can also use his mega-brainpower to access the Internet, a choice that gives the essentially Gothic, haunted-coastal-hospital set-up a nicely techy edge. It’s a good way of acknowledging that this Patrick is a present-tense reworking of old-fashioned material, and it also lets the title character communicate with Kathy via tense, terse text messages.

Hartley, who directed the fine, self-explanatorily titled Not Quite Hollywood: The Wild, Untold Story Of Ozploitation! isn’t an especially supple stylist: Patrick’s scares are mechanical, its plot moves in fits and starts, and the cross-cutting towards the climax is labored when it should be lickety-split. But he’s nevertheless made a handsome-looking horror movie. The gray institutional interiors are so deliciously drab that viewers could just eat them up, and that’s exactly what the older actors do: When veterans as talented as Dance and Griffiths decide to chew the scenery, they do so with their chompers bared. Meanwhile, Vinson, who held her own against the animal-masked intruders of You’re Next, is sympathetic in a role that thankfully never devolves into mere damsel-in-distress shtick. Her physically and emotionally agile performance makes her the perfect foil for a bad guy who spends the entire movie flat on his back.

Their relationship ultimately ends up feeling shaded rather than silly, and that’s a testament both to Justin King’s smart scripting and the durability of the old maniac-as-unrequited-lover motif. Sizing up his rivals with a thousand-yard stare, Patrick is malevolent, but he’s also melancholy—the ultimate example of a guy who likes a girl, but try as he might, can’t make a move. In a softer-hearted movie, he could have been an underdog hero – the kind of guy who’d levitate a boombox to Kathy’s window and make it play “In Your Eyes.” But luckily, Hartley knows what sort of film he’s making. That’s why he hired Pino Donaggio.