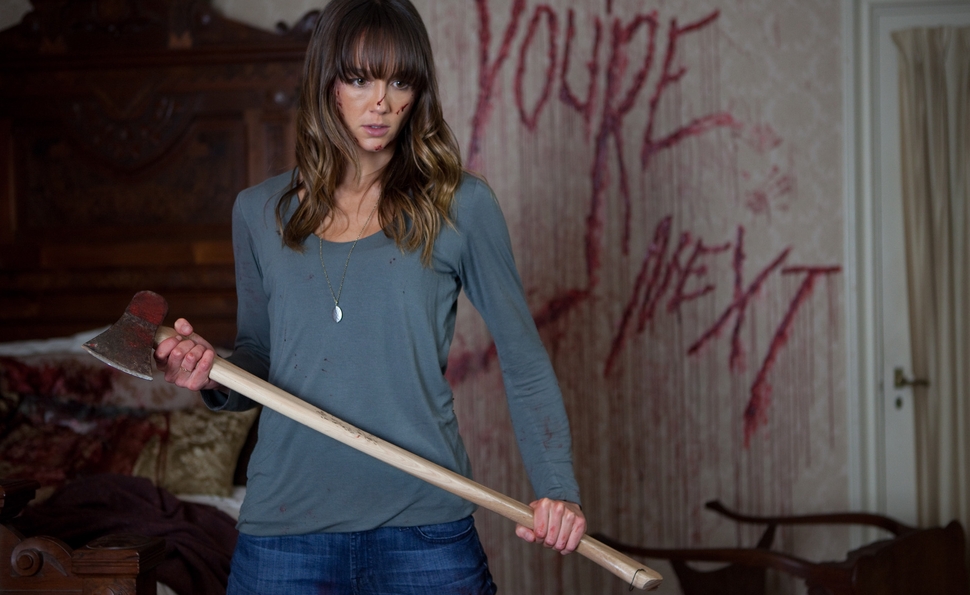 Anyone shopping for a horror movie can be forgiven for eyeing You’re Next with suspicion. Its trailers, in which figures in animal masks menace a family in their home, arrived at roughly the same time as those for The Purge, another film with masks and domestic menacing. And neither film appeared out of nowhere; both seemed to owe a debt to 2008’s The Strangers, in which Liv Tyler and Scott Speedman are besieged by masked baddies, to say nothing of other, similar films. But though You’re Next director Adam Wingard has referenced The Strangers as an influence, he’s also acknowledged the inspiration of Scream, which better suggests what You’re Next is up to. That isn’t to suggest You’re Next plays the same meta games as Wes Craven’s slasher revival. It doesn’t have to. It has its own games to play.

That isn’t immediately apparent, though. The film opens with an impressively staged bit of straightforward dread and bloodshed, featuring an isolated house in the woods, bad sex, a picture window, a classic Dwight Twilley song playing on repeat, and the title of the film written in blood. Most of the film takes place next door, however, in the expansive home of the wealthy Davison family, where Paul (Rob Moran) and Aubrey (Barbara Crampton) have invited their four children to celebrate their 35th wedding anniversary. The casting of Crampton, an ’80s scream queen given a chance to test her lung capacity here, provides the first sign of what’s to come, though as the children arrive, it seems like the family might tear itself apart before outsiders get the chance. Crispian (A.J. Bowen) arrives with his academic career flagging and his girlfriend Erin (Australian actress Sharni Vinson of Step Up 3D) in tow. But no matter how much he’s warned her, Erin remains unprepared for the dysfunction coursing through the family and their various significant others. These include Aimee (Amy Seimetz), who arrives with a filmmaker boyfriend (real-life director Ti West) whose main credential is having a doc featured in the Cleveland Underground Film Festival; the pushy Drake (Joe Swanberg, another real-life director); and Felix (Nicholas Tucci) and his goth girlfriend Zee (Wendy Glenn).

That may sound like a lot of characters to keep track of, but no worries: The ranks soon thin. A fractious family dinner gets interrupted by men toting crossbows and wearing animal masks, and as panic sets in, the Davisons start behaving like characters in horror films. Mostly. Erin soon reveals a secret: She’s a Linda Hamilton woman dropped into a world made for, well, Barbara Cramptons. (If Vinson’s deadpan, physically challenging performance doesn’t raise her profile, something’s wrong with the casting process.)

Saying more would give too much away, and while the twists of the script written by Simon Barrett—who also plays one of the home invaders—are part of the fun, Adam Wingard’s direction is what makes it work. A veteran of both V/H/S anthologies, Wingard uses a lot of handheld camerawork, but he keeps the shots purposeful. It’s the controlled chaos of a director trying for just the right fright effect rather than the shakes and blurs of a found-footage film. Though he goes for a few easy jolts, Wingard also has an eye for creepy composition, and he uses the bad guys’ masks to particularly unsettling effect. Then, when he decides to go in another direction, he starts undermining their creepiness. Though essentially a straight-faced horror film, You’re Next also taps into a rich vein of black comedy. It’s scary and often graphic, but as the action escalates to the point of absurdity, the spirit of early Sam Raimi starts to creep into both the action and the dialogue. The film doesn’t fully know how to wrap up the action, but it doesn’t make too many missteps on the way there, either, making a memorable horror film out of familiar-looking material in the process.