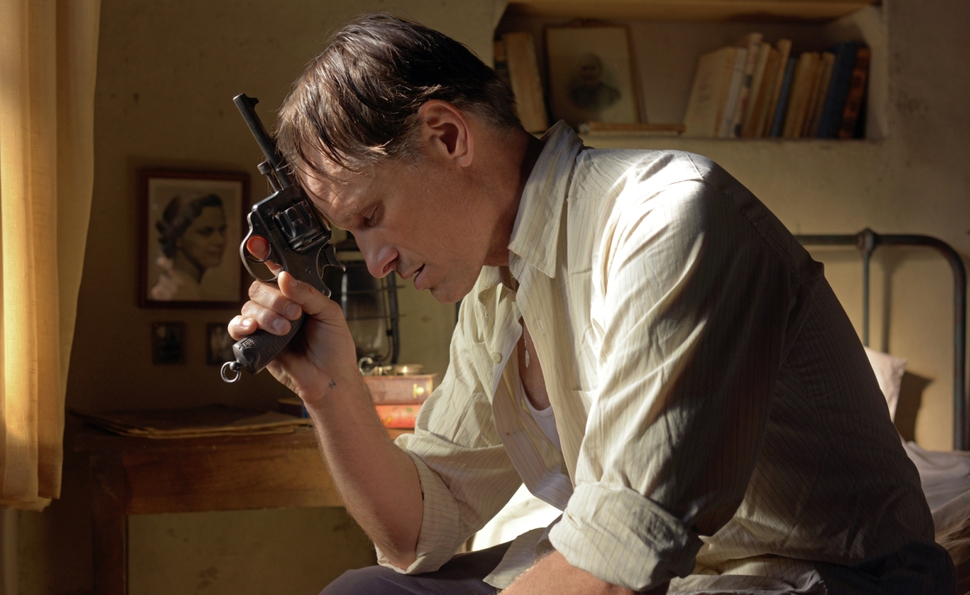 Far From Men opens with a shot that pans across a barren landscape festooned with hills and outcroppings of rock. Despite looking nothing like Monument Valley, the terrain immediately suggests a Western, which is what this loose adaptation of Albert Camus’ short story “The Guest” will in fact prove to be. Though the film is set in Algeria, shooting it there wasn’t possible; instead, writer-director David Oelhoffen crossed the border to Morocco, which shares the same striking vistas. He also made the decision to turn Camus’ story, which takes place entirely in a single location, into something of a road movie, allowing him to integrate the characters with a constantly shifting environment in the classic Western tradition.

Set in 1954 (even though “The Guest” was written in 1957), when the Algerian war for independence began in earnest, Far From Men introduces its hero, Daru (Viggo Mortensen), in a location that’s about as far from other men as he was able to get without becoming a cave-dwelling hermit. Daru was born in Algeria to Spanish parents, and previously served in the French military; like Camus, he has no interest in taking sides, and consequently is running a one-room school in the middle of nowhere, teaching Arab kids French geography that they’ll likely never need to know. One day, a gendarme arrives with an Arab prisoner named Mohamed (Reda Kateb) in tow and dumps the guy with Daru, instructing him to escort Mohamed to a town 20 kilometers away where he’ll stand trial for murdering his cousin. Daru initially refuses, but Mohamed, for reasons not revealed until later, very much wants to face the music, and so the two men trudge off together, fully aware that armed rebels may happen upon them at any moment.

Though technically an American (he was born in New York), Mortensen grew up all over the place and became quite the polyglot. Here, he speaks both French and Arabic and seems entirely at ease with both, even as Daru exhibits intense discomfort with his temporary role as itinerant jailer. Far From Men is as much a buddy movie as a Western, observing the gradual bond of respect and affection that forms between Daru and Mohamed; it’s the story of two men who reluctantly accept the dynamic they’ve been assigned, out of necessity, but can’t help becoming fast friends anyway. That may sound a bit sappy, but Oelhoffen, who also wrote the screenplay’s eloquently spare dialogue, gets fine, flinty performances from both actors, with the lesser-known Kateb (who had a small but pivotal part in Zero Dark Thirty, as the detainee Maya watches being tortured) more than holding his own against Mortensen’s soft-spoken charisma.

Still, Oelhoffen’s smartest move was to open up Camus’ story visually. “The Guest” never leaves Daru’s schoolhouse, but most of Far From Men takes place en route to the town, allowing Oelhoffen to emphasize the characters’ relative insignificance by having them dwarfed by their surroundings. It also gives him the opportunity to introduce Algerian rebels who fought with Daru for the French years earlier, thereby further complicating questions of loyalty, allegiance, and ostensible neutrality. The new ending Oelhoffen has dreamed up is unsatisfying—Camus’ version was sharper, nastier, more credible—and the film never strays far from genre convention, but it’s refreshing to see a sincere paean to nobility, honor, and courage, especially one that periodically elevates the pulse with expertly mounted standoffs. In many respects, this feels like a Western that could have been made in 1954. That’s decidedly a compliment.