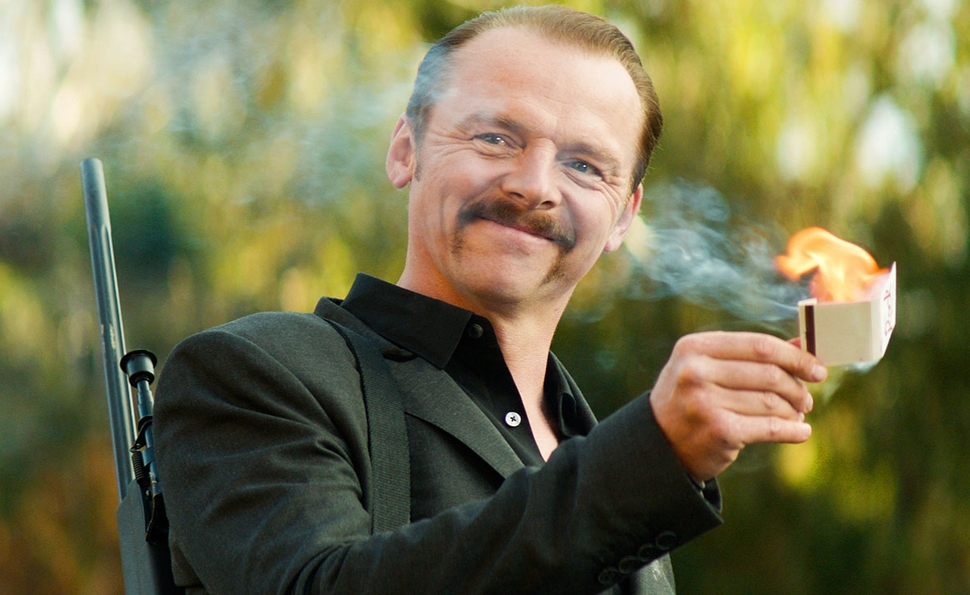 Nobody gets killed three times in the Australian comedy-thriller Kill Me Three Times, but virtually the entire cast winds up getting killed once. They’re deliberately ugly deaths, too: gunshot wounds that produce geysers of slo-mo blood, with one shot improbably severing the victim’s carotid artery for maximum spray. They make life feel cheap, which appears to be the movie’s sole purpose. Neither particularly funny nor especially clever, Kill Me Three Times is mostly just nasty—the cinematic equivalent of a back-alley dogfight in which none of the onlookers has any stake in which animal wins.

Pointlessly structured in three parts, with the narrative circling back to revisit events from another character’s perspective, James McFarland’s screenplay begins at the end, with all-purpose hired scumbag Charlie Wolfe (Simon Pegg) lamenting his impending death near a gorgeous Western Australia beach. A section titled “Kill Me Once” then relates, in flashback, a scheme in which a dentist named Nathan (Sullivan Stapleton) and his wife, Lucy (Teresa Palmer), attempt to murder one of Nathan’s patients, Alice (Alice Braga), switching the dental records so that the police will think Lucy died and the couple will collect a huge life-insurance payout. “Kill Me Twice” jumps back to reveal that Alice’s abusive husband, Jack (Callan Mulvey), is Lucy’s brother; that Alice is having an affair with mechanic Dylan (Luke Hemsworth, the forgotten Hemsworth brother); and that Jack has hired Charlie to kill Alice, unaware that Nathan and Lucy already have that planned. And then “Kill Me Three Times”… just finishes up the story, which also involves a corrupt cop (Bryan Brown) shaking down Nathan for his gambling debts.

Certain aspects of Kill Me Three Times echo (deliberately?) the Coen Brothers’ Blood Simple: a cheating wife looking to escape a bad marriage; a bar-owner husband who hires a private dick to collect evidence of the infidelity, then offers him more money to kill her; a safe in the back of the bar that gets robbed; crossed wires regarding who’s been killed. But where Blood Simple derives its black comedy from its characters’ natural but completely mistaken assumptions about what’s going on, Kill Me Three Times turns out, once it stops playing cutesy structural games, to be dully straightforward. There’s one late-breaking twist in terms of who’s been scheming with whom, but this revelation is barely meaningful, merely adding one more betrayal to the heap. By and large, all of these awful people are doing exactly what they appear to be doing, so the ostensible amusement consists of watching them be awful to each other.

In the right hands, that approach can be uproarious. Neither McFarland nor director Kriv Stenders (whose five previous features haven’t been released in the U.S.), however, succeeds in pushing the material into the red, where the behavior becomes so absurdly appalling that one can only laugh at it. Pegg, in particular, is completely squandered—the movie’s idea of a funny thing for him to do is hold up his hand, which has been impaled by a knife, and emphatically say “Ow!” Kill Me Three Times is reasonably absorbing while it’s in progress, if only because it succeeds in inspiring curiosity about where it’s headed, but the finale is such a blood-soaked shrugfest that it retroactively makes everything that preceded it feel like a waste of time. Alice, who’s the least venal person in the ensemble (she “merely” cheats on her husband and steals $250,000 from him), is the closest thing Kill Me has to a protagonist, but it’s Charlie, in his opening voiceover, who best expresses the film’s nihilistic sense of futility: “As I lie here waiting for death’s cold embrace, I find myself asking the question: How the fuck did it come to this?”