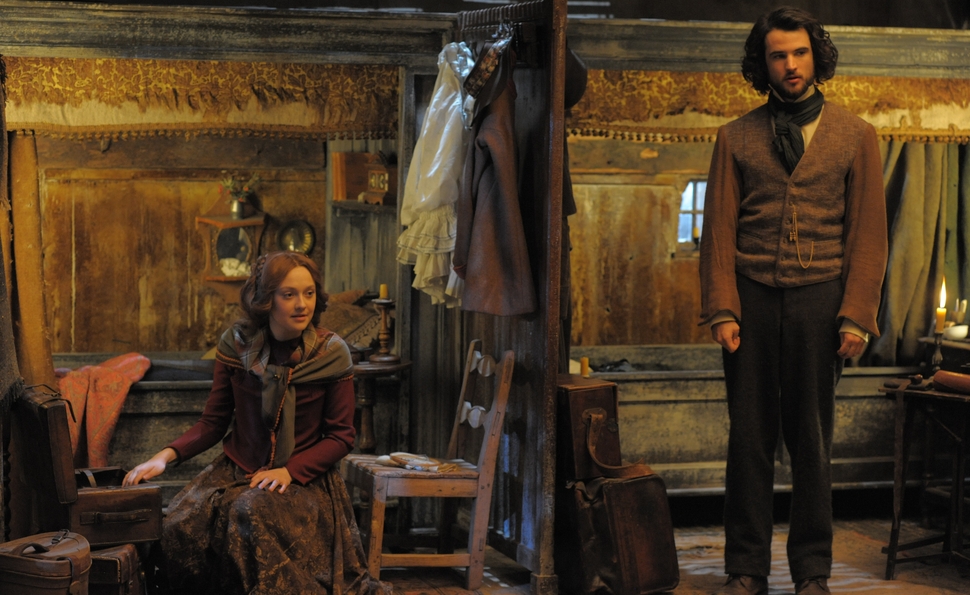 John Ruskin may be one of history’s most important, influential art critics, but he’s been taking a real beating at the movies lately. First came Mike Leigh’s Mr. Turner, which portrayed Ruskin (played by Joshua McGuire), the greatest champion of painter J.M.W. Turner, as a pathetic, sniveling fop. But that’s nothing compared to the hatchet job performed by Effie Gray, a new biopic about Ruskin’s wife. Written by Emma Thompson—her first screenplay since she won the Oscar for Sense And Sensibility, if we all just agree to forget about the two Nanny McPhee movies—the film has boundless compassion for its title character, who’s trapped in a loveless, sexless marriage at a time when women had few tolerable options for correcting such an error. But Thompson makes Ruskin such a cardboard villain, playing on stereotypes of the cold, stuffy intellectual, that she turns Gray’s story into a tastefully dreary domestic-prison saga.

Ruskin (played by Greg Wise, Thompson’s real-life husband) married Euphemia “Effie” Gray (Dakota Fanning) in 1848, when he was 29 and Gray was 20. He’d known her since she was a girl, as their respective parents were friends, and their marriage was all but arranged. Unfortunately, the wedding night is a disaster: When Gray shyly disrobes, standing naked before her husband for the first time, he responds by leaving the room without a word. Thereafter, he never so much as touches her, and doesn’t have any interest in talking to her, either: He treats her like an especially annoying child. On a trip to Venice (which led to Ruskin’s three-volume treatise on the city’s architecture, The Stones Of Venice), Gray flirts mildly with a gondolier, but rebuffs him when he tries to actually make a move. Eventually, however, she falls in love with painter John Everett Millais (Tom Sturridge), who’d been hired to paint Ruskin’s portrait, and starts taking steps to have her unconsummated marriage annulled.

Previous movies, plays, and TV dramas about the Ruskin-Gray marriage—dating all the way back to the 1912 silent film The Love Of John Ruskin—have tended to focus on this love triangle, aiming for maximum melodrama. Thompson, by contrast, is more interested in Gray’s experience of being stifled and ignored over the six years of her marriage. That might have made a compelling approach for a novel (perhaps featuring an internal monologue), but it plays as frustratingly passive and dour onscreen. Effie Gray was directed by British TV veteran Richard Laxton, who gives the material a somber, almost funereal tone; while Fanning does her best to silently convey Gray’s turbulent emotions, she’s given little to work with, and often just winds up looking vaguely defeated. Thompson herself occasionally enlivens the film, playing the progressive socialite Lady Eastlake, who takes an interest in Gray and encourages her to assert herself more. (The real Lady Eastlake wrote scathingly about Ruskin, so her venom may have rubbed off.)

Effie Gray’s biggest problem, though, is that it doesn’t bother to explore the question of why Ruskin has no sexual interest in Gray whatsoever. (Her medically established virginity becomes her “get out of jail free” card.) Possibly he was gay, but there’s no suggestion of that in the movie, nor any evidence of it in the historical record. Ruskin stated, during the annulment proceedings, that “though her face was beautiful, her person was not formed to excite passion,” the meaning of which has never been firmly established; Laxton shoots Gray’s nude scene from the neck up, leaving her body unseen, which creates more ambiguity than was likely intended. (This is why films shouldn’t hire actors who won’t do nudity for projects that absolutely require it. Here, it’s crucial that Effie Gray be seen as a perfectly normal young woman. Not showing her body when she deliberately exposes it creates the impression that there’s something to hide, accidentally giving Ruskin’s nutty assertion implicit merit.)

Given that Ruskin knew Gray well before she hit puberty, it’s possible he was simply unable to regard her as a sexual being—that the notion of sex with her suddenly felt way too creepy. (This idea only gains force from the whopping 27-year age difference between Wise and Fanning, more than three times the actual age difference between Ruskin and Gray.) The movie doesn’t consider that, though, nor any other psychologically credible possibility. It’s content instead to portray Ruskin as such a cerebral, unfeeling prig that he’s essentially asexual, while offering Millais, the impassioned artist, as his polar opposite, a dynamic that’s cliché city. At one point, Millais, while painting Ruskin’s portrait near a waterfall, mentions a death in Gray’s family, to which Ruskin responds callously; Ruskin then immediately utters the deathless phrase “Look at that exquisite leafage.” The idea that he’s more interested in objects than in people couldn’t be hammered home more bluntly, and couldn’t be less dramatically compelling.