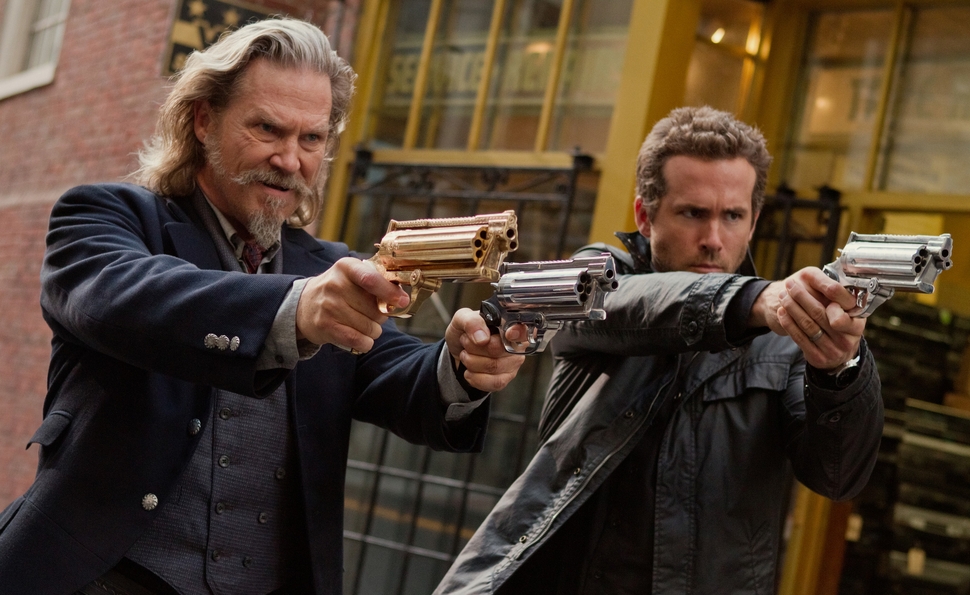 Arriving on the heels of Cop Out, 21 Jump Street, and The Heat, R.I.P.D. affirms the full-on revival of the wacky mismatched-buddy-cop movie that thrived in the 1980s and early 1990s after the breakthrough success of 1987’s Lethal Weapon. In the ’80s, these films proliferated at such a pace that it soon wasn’t enough merely to pair a distinguished, by-the-books cop forever getting too old for this shit and a renegade so unhinged, he not only carries a lethal weapon, he is a lethal weapon.

Unlike technology, film genres tend to operate in cycles, so it’s no surprise that filmmakers have once again returned to the verdant soil of undead law-enforcement officers for R.I.P.D., a big-budget, special-effects-intensive 3-D buddy comedy inspired by a Dark Horse graphic novel. It’s also presumably inspired by the box-office grosses of the Men In Black movies, to which it bears an unmistakable similarity.

The eternally acceptable Ryan Reynolds—who has developed into a legitimate dramatic and comic leading man and action star while still seeming like the fourth or fifth choice for every role he plays—stars as Nick, a cash-strapped Boston cop wracked with guilt over squirreling away some ill-gotten gold from a bust. The conscience-stricken cop doesn’t have much opportunity for regret before he’s gunned down in the line of fire and assigned to R.I.P.D., a supernatural contingent of dead cops from throughout the ages burdened with hunting down “deados,” malevolent dead creatures that linger on earth after their passing, causing all manner of problems.

The recently departed officer is partnered with Roy, a similarly deceased 19th-century lawman whom Jeff Bridges plays with the facial hair of Colonel Sanders and the speech patterns of Foghorn Leghorn. Bridges is clearly having a blast playing a rootin’-tootin’ goof of a cowboy, though his drawl is so difficult to understand at times that he seems to have delivered his entire performance with a solid layer of crunchy peanut butter stuck to the roof of his mouth.

R.I.P.D. makes intermittently inspired use of 3-D technology to convey the enormity of the universe its supernatural lawmen inhabit, most spectacularly in a setpiece where the recently killed Nick moves past an earthly realm frozen in time and on to his destiny in the afterworld. 3-D lends itself most naturally to speedy chases and propulsive action, but there’s an eerie, powerful calm in watching the hero make his way through a three-dimensional world that is completely still.

But the film quickly trades in that powerful calm for clattering spectacle and breakneck patter. R.I.P.D. takes place in a comic-book world where anything is possible and the lines separating the living from the dead have been erased, yet it nevertheless finds comfort in the soothing familiarity of time-honored buddy-cop movie beats.

At first, the mismatched duo do not trust or even like each other. Roy gets on his more recently traumatized partner’s nerves with his never-ending verbiage and cocky attitude, until the younger man proves himself, and distrust and disdain give way to mutual appreciation.

In its superior first act, R.I.P.D. generates real emotion from Nick’s grief over his own passing and the impossible gulf separating him from his still-mortal wife, but by the time the film returns to that subplot a good 40 minutes later, its fuzzy, halfhearted aspirations to pathos have been lost, as has even the faintest pretense of originality.

R.I.P.D. begins from a place of endless possibilities and imagination, then follows the breadcrumbs of formula to a wholly generic end. The film teases intriguing details of the afterlife, like the ubiquity of Steely Dan, whose music soothes the dead in addition to relaxing and enraging the living. Then it fills in the remaining contours of its universe with bits and pieces borrowed from the Men In Black and Ghostbusters movies. The film’s monsters, meanwhile, often amount to little more than computer-generated variations on Fat Bastard from the Austin Powers trilogy.

A film that grows less compelling and original by the minute, R.I.P.D. serves due notice that the mismatched-buddy-cop movie is wearing out its welcome all over again. Let’s hope filmmakers and studios learn their lesson before they attempt to give the dormant mismatched-interspecies-buddy-cop comedy a CGI twist, or even worse, attempt to resurrect the mentally ill hijinks of Loose Cannons for a new, unsuspecting generation.