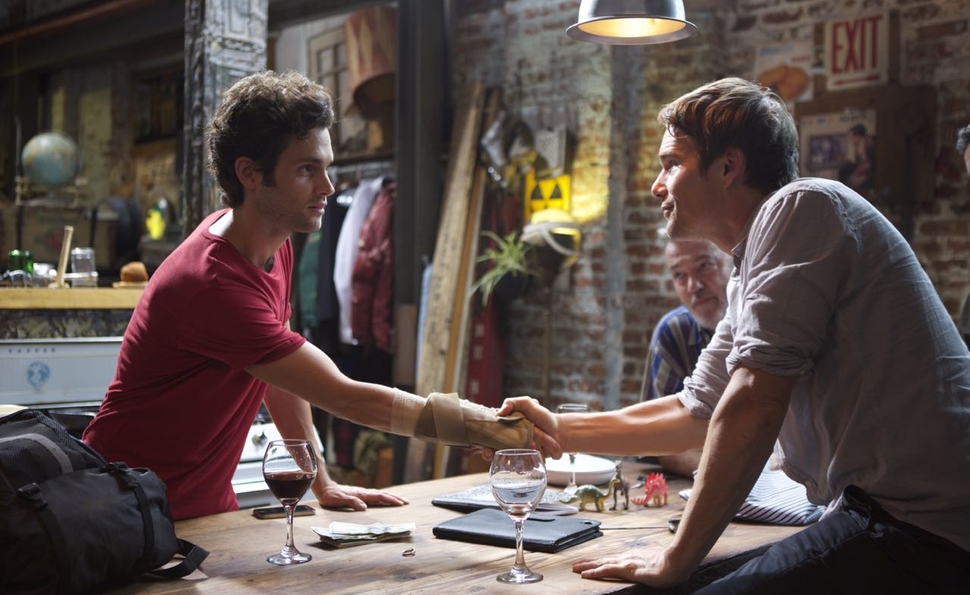 When Michael Almereyda made his modern-dress version of Hamlet back in 2000, starring Ethan Hawke in the title role, part of the fun was how completely unexpected the project was. For one thing, Kenneth Branagh had released an acclaimed four-hour Hamlet only a few years earlier; nobody foresaw another adaptation so hard on its heels. For another, Almereyda had a reputation as an offbeat filmmaker—someone who liked to explore new technology (his second feature, Another Girl Another Planet, was shot entirely using a Fisher-Price PixelVision camera marketed to children) and was partial to genre fare. (Nadja and Trance feature vampires and a bog-witch, respectively.) Shakespeare didn’t really seem up his alley. Yet his Hamlet is a witty, inspired delight, riffing on the text in thought-provoking ways, and making excellent use of its ensemble cast, which includes Diane Venora as Gertrude and Bill Murray as Polonius. At the time, the prospect of further Almereyda Shakespeare movies would have been more than welcome.

Maybe he waited too long. Arriving 15 years later, Cymbeline, which reunites Almereyda, Hawke, and the Bard, lacks its predecessor’s clever zing: It more closely resembles the Macbeth-on-Mars stunt productions that frequently crop up in regional theater. It surely doesn’t help that this is one of the weaker plays in the canon, believed by most scholars to have been partially written by someone other than Shakespeare; its only previous notable adaptation is a BBC production from 1982, starring Helen Mirren. Almereyda wrote the screenplay, and has opted to make Cymbeline (Ed Harris), the king of Britain, into the leader of a biker gang, a conceit that flirts with silliness much more than his reimagining of Denmark as a multi-national corporation. He’s also tossed multiple scenes and cut at least half the overall dialogue—an approach that worked just fine for Hamlet, which everyone reads in school, but is not so effective when applied to a play that’s simultaneously more heavily plotted and less widely known.

Briefly, the story is this: Cymbeline, who’s being urged by his new queen (Milla Jovovich) to stop paying Augustus Caesar what amounts to protection money, is also mightily pissed off at his daughter, Imogen (Fifty Shades Of Grey star Dakota Johnson), for secretly marrying the lowly Posthumus (Penn Badgley) rather than the Queen’s son from a previous marriage, Cloten (Anton Yelchin). Banished to Rome (which appears here to be the city of Rome in upstate New York), Posthumus brags of Imogen’s fidelity and is challenged by Iachimo (Hawke), who wagers he can easily bed this allegedly virtuous goddess. Finding her steadfast, Iachimo cheats by sneaking into her bedroom at night and gathering fake evidence of his conquest; this subterfuge kicks off a series of complications that amount to Shakespeare’s Greatest Hits, including Imogen disguising herself as a boy; a pseudo-poison that makes those who drink it temporarily appear dead; and a character being visited by the ghost of his dead father. The First Folio designates Cymbeline as a tragedy, but while a few people die, the play ends happily for most of the principals, with love and royal blood conquering all.

Almereyda’s sweeping cuts take material that was already problematic (though this technically isn’t one of Shakespeare's “problem plays”) and render it almost nonsensical. The climactic war between Britain and Italy here becomes a turf war, but it’s depicted so hastily, perhaps for budgetary reasons, that several characters who are supposed to get swept up in it barely register; when Posthumus lands in prison at one point, those who don’t know the play will have no idea why. Likewise, all the intrigue involving the poison is difficult to follow, because the scene in which the queen gives it to Pisanio (John Leguizamo, another veteran of modern-dress Shakespeare) and tells him it’s a curative has been cut, and the scene in which the doctor (Peter Gerety) explains that he substituted a fake poison has been shifted to a confusing place in the narrative, then badly garbled. If Almereyda’s textual updates were more amusing, this stuff might not matter, but there’s nothing here as memorable as Hamlet reciting the indecisive “To be or not to be” soliloquy while walking down the Action aisle in a Blockbuster. (Speaking of 15 years having elapsed.) The ideas here range from mildly cute—Iachimo takes selfies with the sleeping Imogen rather than merely describing her bedchamber; a line about “the history of my knowledge” now refers to someone’s browser history—to annoyingly cutesy, e.g. Imogen taking the male name Fidele after seeing a Che Guevara T-shirt.

One major caveat needs to be addressed, however. Almereyda is fundamentally a visual artist, and he’s working here with David Gordon Green’s regular cinematographer, Tim Orr, who’s no slouch in the image-making department either. Unfortunately, the online screener of Cymbeline made available to The Dissolve for review was of astoundingly poor quality. When the film premièred at Venice last year, Variety said it “dazzles with its colors and textures”; in the ultra-low-resolution copy provided, merely seeing the actors’ faces was often impossible, except in close-up. The film may well possess formal virtues that simply weren’t discernible, which would be a shame.

Even if Cymbeline is a misfire through and through, however, there’s good news: Almereyda has already bounced back. His latest film, Experimenter, about Stanley Milgram’s famous inquiries into the nature of obedience to authority figures, premièred at Sundance just two months ago, and is considerably more interesting and innovative than this wan attempt at recapturing past glory. Its title reflects its director’s usual working method. Cymbeline, by contrast, is a rare case of Almereyda playing it safe.