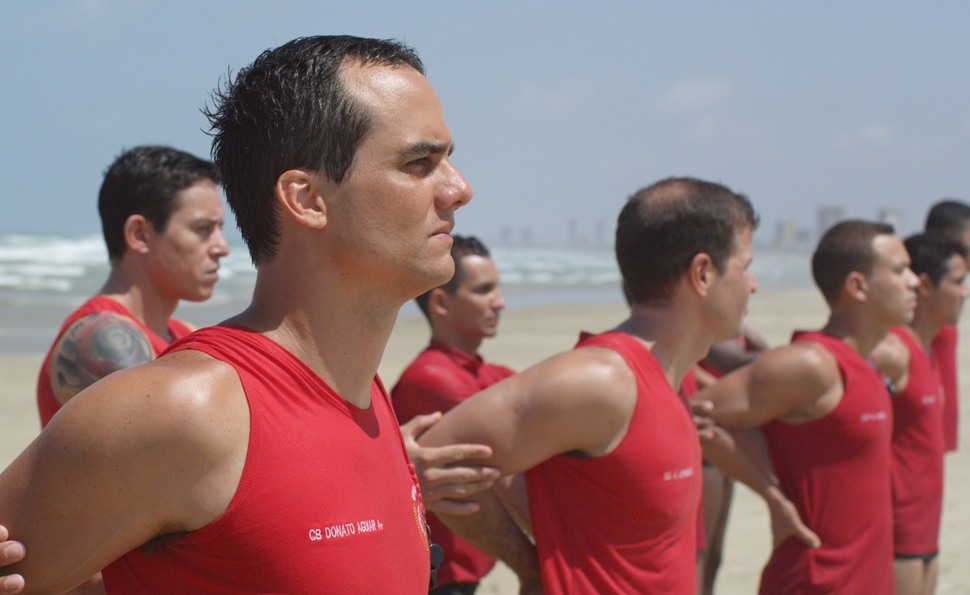 There are narrative filmmakers, there are avant-garde filmmakers, and then there are narrative filmmakers who are really avant-garde filmmakers in disguise. (And maybe vice versa—someone more familiar with the avant-garde will have to weigh in on that hypothetical fourth category.) Karim Aïnouz, a Brazilian-born director who now lives and works in Germany, makes movies that ostensibly tell stories, but he seems far more interested in capturing fleeting moments of abstract visual beauty, to the point where most of his characters’ actions appear to have been reverse-engineered in order to create such moments. That approach was woozily effective in Aïnouz’s 2011 feature The Silver Cliff (never released in the U.S.), which focused on a single night in the life of a woman whose husband has just dumped her by voicemail with no explanation. But it doesn’t work nearly as well in Aïnouz’s latest, Futuro Beach, a more sprawling effort that follows a love affair over roughly eight years and across two continents, to increasingly diminishing returns.

Like Aïnouz himself, the movie moves from Brazil to Germany. It’s cleanly divided into three chapters. Part I, “The Drowner’s Embrace,” provides an arresting opening: Two motocross riders go swimming in the ocean, and lifeguard Donato (Wagner Moura, star of the Elite Squad films) is only able to save one of them when they get caught in a vicious undertow. Donato and the survivor, Konrad (Clemens Schick), who turns out to be a German tourist, drown their respective sorrows in sex, and as Konrad hangs around waiting for his buddy’s body to be found, it gradually becomes clear that he and his savior are developing deeper feelings for each other. Even in these early scenes, though, Aïnouz is at his best when using his camera to depict the violence of bodies struggling underwater, or Donato and his fellow lifeguards doing calisthenics on the beach (a sequence that can’t help but call to mind Claire Denis’ Beau Travail).

That isn’t necessarily a problem, but it starts to become one during Part II, “A Hero Cut In Half.” Jumping forward a bit in time, the film now finds Donato living with Konrad in Berlin, even though the dialogue in Part I involved the question of whether Konrad might remain in Brazil. Trouble is, Donato is homesick—he misses his mother and younger brother, and he can’t imagine spending the rest of his life living in a landlocked country. That’s basically it for about half an hour, as Donato mopes around trying to decide how to answer the Clash’s eternal question, “Should I stay or should I go?” The situation demands some degree of psychological acuity, but it’s mostly an excuse for Aïnouz to have Donato lose himself for several minutes in the dimly lit thumpa-thump of a disco. (The protagonist of The Silver Cliff did the same thing, but what’s evocative in the context of a single night is less so when the ostensible crisis is ongoing.)

Futuro Beach then leaps ahead something like seven or eight years, and into the abyss, for Part III, “A German-Speaking Ghost.” It’s an exceedingly bold move that’s more admirable than accomplished, abruptly shifting focus to what appears to be a new character, Ayrton (Jesuíta Barbosa). Eventually, it’s revealed that this is Donato’s younger brother, who was only 10 in Part I, but is now an angry adult, just arrived in Berlin in search of the father figure who abandoned him. It’s then further revealed that Donato and Konrad split up long ago, for reasons never mentioned, and have barely spoken for years. This is potentially powerful stuff (and the deliberate ellipsis makes it all the more intriguing), but it’s barely explored. Instead, Aïnouz sends Ayrton, then all three men, tooling around Berlin on motorcycles, so he can observe the reflection of streetlights on a black helmet and watch their forms gradually disappearing in a deep fog. The images are gorgeous, but they’re gorgeous in a void; unlike in The Silver Cliff, the intended connection to the people who inhabit them is missing. Possibly Aïnouz let autobiographical impulses lead him astray. Or maybe he’s an avant-garde filmmaker at heart.