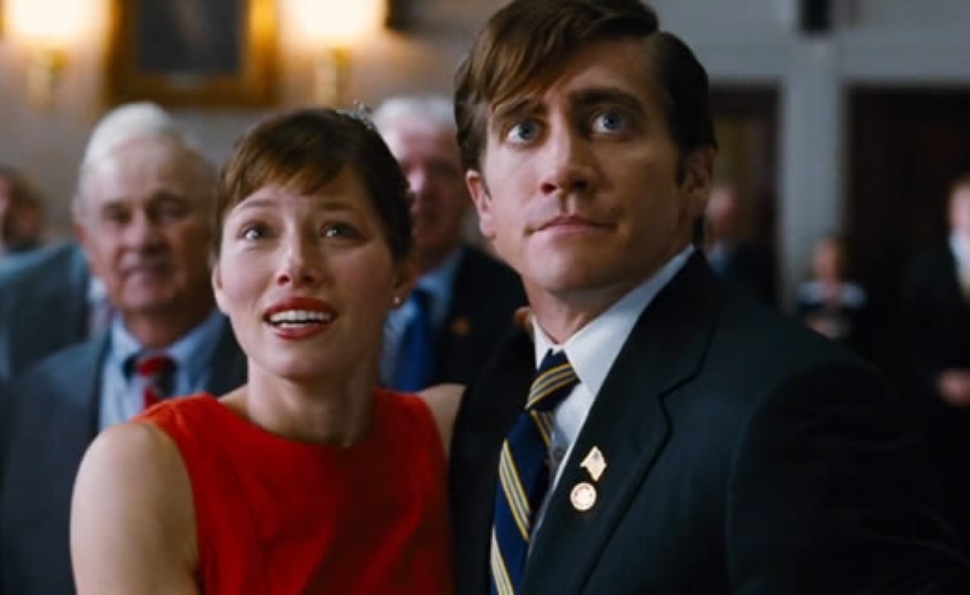 When a director has disowned or otherwise walked away from a movie, it’s nearly impossible not to watch it with a jaundiced eye. Accidental Love famously started out, way back in 2008, as Nailed, David O. Russell’s intended followup to I Heart Huckabees. After production was shut down multiple times due to financing issues, Russell quit the project—“Screw this, I’m gonna go reinvent myself as a prestige filmmaker and score three Best Picture nominations in a row,” he reputedly yelled on his way out the door—and Nailed languished in limbo for years, unfinished and apparently unsalvageable. Somebody finally managed to cobble together a semi-coherent version, and the film is now being released with a new, VOD-friendly title (not many words come before “accidental”) and the credit “directed by Stephen Greene.” This Greene fellow is quite the impressive David O. Russell mimic, though. Accidental Love isn’t very good—and might never have been very good, judging from the general air of desperation—but much of it is identifiably Russell’s work, and its scattered best moments recall Huckabees’ inspired loopiness.

Even had the film been released in a timely fashion, it’d still be a period piece today, as it’s primarily a satire about what was then America’s lack of universal health care. (The screenplay was adapted by Kristin Gore, daughter of Al, from her 2004 novel Sammy’s Hill.) Jessica Biel plays Alice Eckle, a rollerskating carhop waitress (they still exist?) who’s barely had time to say “yes” to a proposal of marriage from cop sweetheart Scott (James Marsden) when a freak accident buries a thick nail in her skull. Surgery to remove it will cost $150,000, and Alice isn’t insured, so she travels to Washington D.C. to seek the help of earnest freshman representative Howard Birdwell (Jake Gyllenhaal) in getting a health-care bill passed. Trouble is, the nail has penetrated the part of her brain that regulates inhibitions, causing her to fly into violent rages and act on every passing sexual urge. Further complicating matters are an ambitious congresswoman (Catherine Keener) who wants to use Alice to rally support for a military moon base and Alice’s blossoming romance with Birdwell, which doesn’t exactly thrill her now ex-fiancé Scott.

Some reviews of Accidental Love describe it as obviously unfinished, which is a case of people seeing what they expect to see. Apart from some choppy transitions between scenes, the film looks like a run-of-the-mill mediocre comedy—no glaring narrative omissions, no awkward shots clearly designed to paper over some gap. What it lacks is the precise timing that Russell’s rapid-fire ensemble pieces require. Whenever a gaggle of characters inhabit the frame simultaneously for an extended period, talking over each other, it’s possible to see the movie Russell intended. But that’s a fairly small percentage of the running time, dwarfed by sequences in which ping-pong editing fails to create a viable comic rhythm. Furthermore, the actors often seem to be in different movies altogether—Alice is supposed to be emotionally liberated by the nail in her head, but Biel is considerably less manic and unhinged than Gyllenhaal, who sometimes seems to be gearing up for his Nightcrawler role. And it’s hard to conceive of any cut that might have wrung laughs from Tracy Morgan and Kurt Fuller, playing two random friends of Alice’s who suffer from a prolapsed anus and priapism, respectively. (The latter is a priest with a constant boner, yuk yuk yuk.)

For casual viewers who just want funny jokes, Accidental Love’s ratio of duds to winners is far too lopsided. Russell fans, however, will find just enough of his sensibility intact to make watching the film a truly frustrating experience. Neither he nor “Stephen Greene” gets script credit, but Russell reportedly did make contributions, and numerous stray lines and bits of frenetic business provide brief jolts of acerbic fun, as when Alice excitedly turns to Scott and suggests that the nail might allow her to finally have an orgasm. (When Scott quotes statistics about how few women climax during intercourse, she asks, “What about you starting gentle like I asked, and then taking it at the angle that I really like?”) Alice’s campaign ad touting the moon base is nearly as priceless as Naomi Watts’ Huckabees commercials, as is a negative campaign ad engineered by Keener’s venal congresswoman that turns two Girl Scouts holding hands into an exhortation to “stop the gay poison.” Whether Russell could have linked these bits into a sustained comic aria, had he stuck around, is impossible to say, especially since the ending seems to have been expressly designed as a soggy plea for universal health care. For a certain type of viewer, though, rooting through Accidental Love seeking tattered remnants of Nailed has a masochistic appeal of its own.