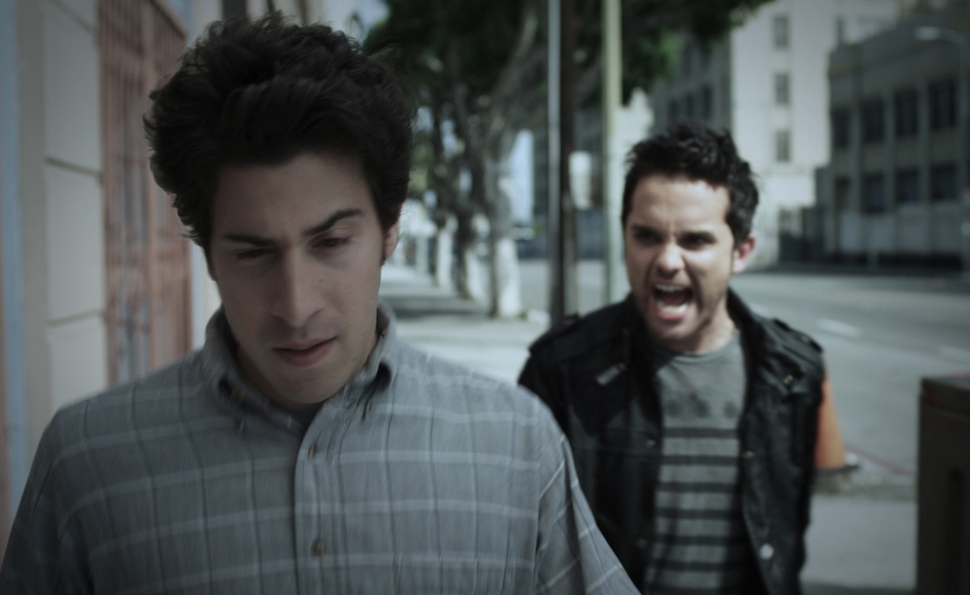 The best thing to be said about the ludicrously titled Enter The Dangerous Mind (which played the festival circuit two years ago as Snap) is that it doesn’t waste a lot of time bullshitting the audience. Oh, it goes through the motions: The film’s protagonist, Jim (Jake Hoffman, Dustin’s son), initially appears to be just a slightly dweebish but normal thirtysomething, afflicted by no greater problem than his difficulty working up the self-confidence to talk to women. Very quickly, though, something about Jim seems… off. Most notably, his obnoxious best friend, Jake (Thomas Dekker, from Kaboom), never seems to leave his side, or stop talking, or—subtle, but noticeable—interact with anyone but Jim. Just as Fight Club inevitably springs to mind, the movie comes clean, revealing that Jim is schizophrenic, and Jake is the personification of a voice in his head. Thankfully, Jim is a functioning schizophrenic who’s no danger to himself or others, and can even do odd jobs for his former social worker (Scott Bakula). Until he suddenly isn’t anymore.

For a while, it appears as if Enter The Dangerous Mind, written by Victor Teran and co-directed by Teran and Youssef Delara, will take this grim subject fairly seriously, even if it seems more interested in throwing as much dubstep onto the soundtrack as humanly possible, and cutting the film to its rhythms. (Jim is an aspiring musician whose “sick beats” have amassed some 16,000 followers.) At Jake’s pushy urging, Jim asks out another social worker, Wendy (Thirteen’s Nikki Reed), and when their first date ends disastrously, with Jim jizzing in his pants and then abruptly going home, Wendy reacts like a normal person likely would, showing compassion for Jim’s embarrassment, but no further romantic interest. (It isn’t the sexual dysfunction that bothers her, it’s how he behaved afterward.) Harrowing scenes in the tradition of Lodge Kerrigan’s Clean, Shaven follow, as Jim uses a screwdriver to try to remove the tiny transmitter he believes Jake has implanted in his ear. The film isn’t especially good—comparisons with Kerrigan’s masterfully nerve-jangling manipulation of sound and image do it zero favors—but at least it’s honest.

Come third-act time, however, Enter The Dangerous Mind goes straight into the toilet, transforming into Jim: Portrait Of A Schizophrenic Serial Killer. Having fudged the question of why a previously non-violent guy like Jim would own a gun—there’s a scene in which cops drop by his apartment to ask him to turn his dubstep down, then find an air pistol, which Jim claims he’s only used a couple of times for target practice—the film has him follow Wendy to a dinner party and start shooting people point-blank in the face. On the one hand, Delara and Teran are too cowardly to let innocent characters be executed, so they preface the murders with dialogue in which the future victims trade insensitive gossip about Jim’s condition, calling him a freak and laughing cruelly about the pants-jizzing episode. (Ludicrously, one woman even calls Jim “tiny dick” while he’s pointing the gun in her face.) This makes Jim’s killing spree seem semi-righteous, so long as he doesn’t murder nice-gal Wendy or the hosts’ little girl. On the other hand, the message unmistakably conveyed by the film’s ending is that some sick people simply can’t be treated, and compassion toward them, while a laudable impulse, is pointless and destructive. Better to just bash their heads in, for the good of humanity. There are other people who can create sick beats.

(Oh, and just in case all of that wasn't offensive enough, there’s a coda featuring an early candidate for the year’s dumbest twist. For that final spasm of ridiculousness, see The Reveal.)