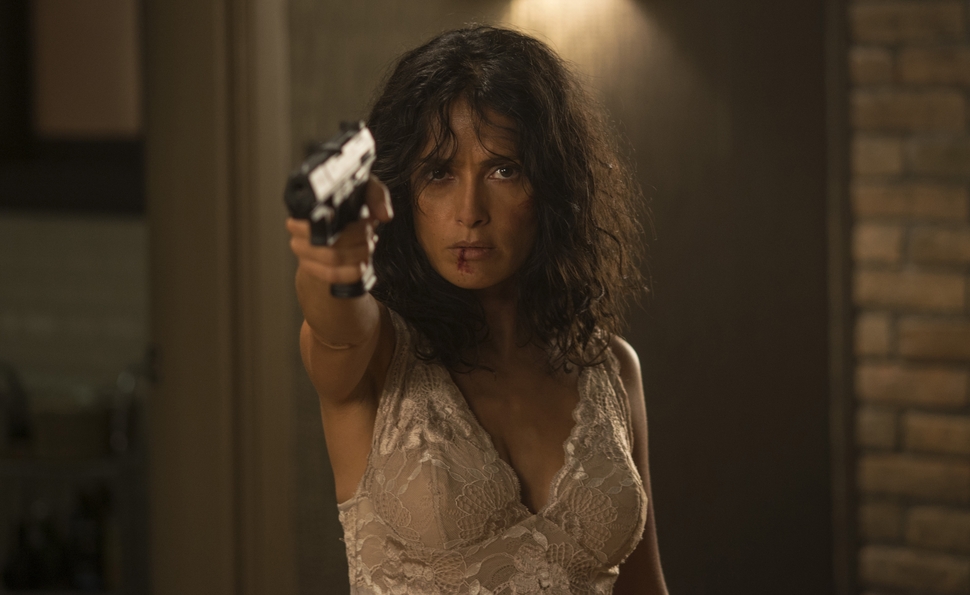 There’s a certain lizard-brain appeal to Everly, which sounds pitched from the daydreams of a dim-witted 15-year-old who’s nursing addictions to manga and pornography: What if, like, a super-sexy prostitute shot up a bunch of yakuza guys for 90 minutes? In Joe Lynch’s Everly, that super-sexy prostitute is Salma Hayek, who looks just as ravishing with a shotgun now as she did 20 years ago in Robert Rodriguez’s Desperado, and equally adept at surviving the subpar exploitation movie that requires it. The yakuza let the American writer and director—Yale Hannon and Joe Lynch (Knights Of Badassdom), respectively—mimic the gory exoticism of extreme Asian cinema without making VOD-watchers squint through the subtitles. At the most basic level—and this is as basic as movies get—Everly delivers exactly what it promises, though as with most American films with sex and violence, the emphasis is heavily weighted toward the latter. But apart from Philip Glass, there isn’t much music to be made by mashing the same couple of notes, and the lack of variation gets to be a grind.

Lynch and Hannon make the smart decision to start Everly in medias res, with Hayek’s eponymous character scurrying from a hail of bullets, and sketching in the backstory later. Everly is a prostitute who was taken from her home and her newborn daughter and deposited in a yakuza-run building with other sex slaves. Given the opportunity to escape this terrible situation, she started a one-woman rebellion, to which the Big Boss responded by sending wave after wave of henchmen (and fellow prostitutes) to put her down. Her lone ally in this fight is a gut-shot gangster (Akie Kotabe) who offers as much assistance as he can while bleeding out on the couch, but Everly is mostly on her own, with the distant goal of reuniting with her mother (Laura Cepeda) and a child she’s barely seen.

Nearly all of Everly takes place in a single suite, which supplies Hayek with a range of high-tech options for blowing the heads off the hapless dopes who keep trying to bring her down. In that, Lynch is trying to re-create the compact tension of that action-movie standard, Die Hard, but what’s missing here is the normal-guy quality of Bruce Willis’ character, who’s skilled with a gun (he’s a cop, after all), but as vulnerable as someone in his situation would be. Hayek’s character has no evident background in firearms, but she mows down an entire yakuza army with relative ease, which undercuts the film’s attempts to cast her as a Willis-like everyperson who just wants to get back to her family. It’s hard to say which role is duller—desperate single mother or unstoppable killing machine—but the two aren’t comfortably reconciled. What’s left is Hayek in skimpy lingerie, painting the walls in skull-bits and blood-spatter. Be careful what you wish for, boys.