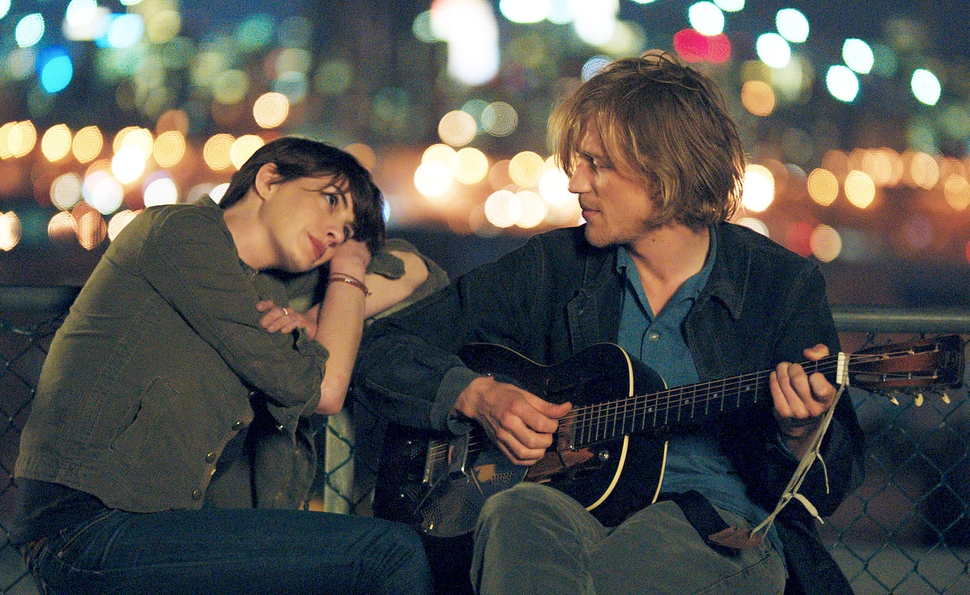 Screen romances, whether they’re comedies or Nicholas Sparks-style weepies, generally have to find some plausible impediment to keep their lovers apart until the final moments. Song One definitely falls into the weepie category, but its gimmick—and creepily, it is more or less a gimmick—involves the way in which its lovers get together. The opening scene appears to introduce the male lead, a young man named Henry (Ben Rosenfield) who’s strumming his guitar for spare change in a New York City subway tunnel. Almost immediately, however, he’s hit by a car and falls into a deep coma. The movie is actually about his sister, Franny (Anne Hathaway), who’d been estranged from Henry and is now desperate to reconnect with him in his semi-absence. Leafing through his journal, she discovers that his favorite musician is British singer-songwriter James Forester (Johnny Flynn), and decides to attend Forester’s show at the Bowery Ballroom. Afterward, she waits outside the backstage door and tells Forester about Henry. The next day, James (he’s really more of a James, regardless of how well one knows him) shows up in Henry’s hospital room with his guitar. Before long, James and Franny are rolling around in mutual emo ecstasy.

And that’s about it, really. There are plenty of scenes set in the hospital room, as Franny and her mother (Mary Steenburgen) talk to Henry, begging him to wake up, but his character only exists to facilitate Franny and James’ moist relationship. It isn’t even really a spoiler to reveal that Henry does regain consciousness near the end, because the moment in which he finally opens his eyes is the last time he’s ever seen. Is Henry thrilled or aghast to learn that his sister has been sleeping with his idol? That’s an intriguing question, in which writer-director Kate Barker-Froyland has zero interest. Instead, she instantly shifts the focus back to Franny’s angst about James, who’s about to head home to England, because his tour is over. Using a grave accident in this frivolous way is Sparksian, but Sparks usually has the decency to inflict his tragedies on the lovers themselves, even if he’s focusing on older or younger versions of the characters. There’s something icky about a life-threatening coma that serves no function except to engineer a meet-cute.

This objection would surely seem more trivial were Song One’s romance deeply affecting. Unfortunately, Barker-Froyland hasn’t given Franny and James anything to do except stare soulfully into each other’s eyes and go dancing in clubs. (The movie springs briefly to life when they flail around to Dan Deacon performing “The Crystal Cat.”) Flynn is an actual British musician (Johnny Flynn And The Sussex Wit), but here, he’s performing songs written by the team of Jenny Lewis and Johnathan Rice, and something seems to have gotten lost along the way—either the songs are bland, or Flynn’s interpretation of them is lifeless. And when he isn’t singing, he’s just a shaggy haircut with a beatific smile, while Hathaway is just two big teary eyes. The only real connection between the two is a funny scene in which Franny watches James open his fan mail and they affectionately mock the more obsessive letters and (do people still send these to musicians?) homemade mixtapes. Otherwise, it’s a shallow relationship predicated on grief, pity, and loneliness… which might have been genuinely interesting had Barker-Froyland explored it as such, rather than suggesting that Franny’s secret soulmate was hiding in plain sight on posters on her brother’s wall.