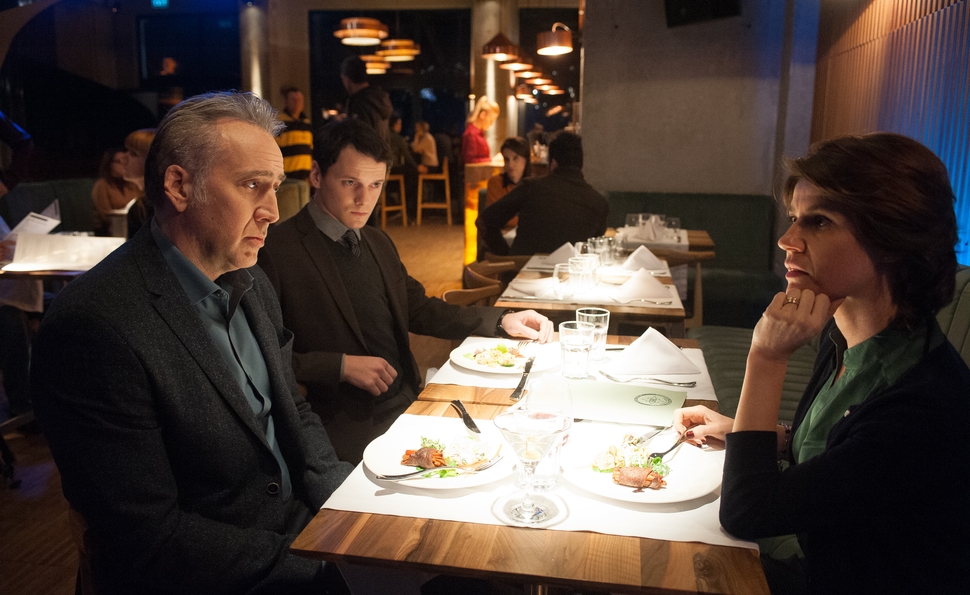 Dying Of The Light

In “Paul Schrader’s” Dying Of The Light, Nicolas Cage plays Evan Lake, a veteran CIA agent who’s suffering from Alzheimer’s more aggressive cousin, frontotemporal dementia. When conferring this terminal diagnosis upon his patient, Lake’s doctor notes that one of the most telling early symptoms of the condition is “inappropriate reactions.” That’s right: Paul Schrader hired Nicolas Cage to play a spy who’s saddled with a physiological mandate to respond to things in a manner wildly disproportionate to the matter at hand. That same strategy worked fine for Matchstick Men. And Vampire’s Kiss. And Leaving Las Vegas. If nothing else, Dying Of The Light illustrates just how fine a line there is between casting and enabling.

Unfortunately, however tempting it might be to approach Dying Of The Light via Cage’s predictably warped performance, the movie and everything in it is tainted by its public post-production woes. Paul Schrader has never played well with the Hollywood system. A polymorphic titan who’s helped shape the cinema as a screenwriter (Taxi Driver), director (Mishima: A Life In Four Chapters), critic (Transcendental Style In Film), and Taylor Swift fan, Schrader has never lacked the courage of his convictions, or his contentiousness. Since the film industry began to destabilize due to the tectonic shifts provoked by the digital revolution, Schrader, more so than any of the other major players of his generation (save perhaps Francis Ford Coppola), has been drawn to the cracks forming between the major studios. 2013’s The Canyons was a far cry from the kind of austere late work that might be expected from someone of Schrader’s renown—his decision to cast Lindsay Lohan and porn star James Deen in the lead roles of the acutely trashy melodrama crystallized his antipathy for the status quo.

In that light, it hardly came as much of a surprise when, on October 16, 2014, Schrader posted on his Facebook page that Dying Of The Light had been “Taken away from me, redited (sic.), scored and mixed without my input.” Alongside the announcement, Schrader posted photos of himself, Nicolas Cage, and Anton Yelchin (who plays Milton Schultz, Evan’s loyal protégée) wearing T-shirts printed with the terms of the non-disparagement clause they had signed with the film’s production company, Grindstone Entertainment Group. In one fell swoop, audiences were informed that they’d probably never see the film as Schrader intended, and that they’d never know the particulars of how the director’s vision had been compromised.

In broad strokes, the film’s plot was likely inviolable. Within the narrow confines of Grindstone’s financial incentive, it’s hard to fathom how to radically reconceive this story of a dying CIA agent who’s forced to retire before settling the most personal case of his career, and even harder to fathom why Grindstone would want to, as the film’s framework is its most accessible element. Lake is introduced at the mercy of generic terrorist Muhammad Banir (Alexander Karim), who’s brutally torturing his American captive. Lake is rescued, after Banir permanently mutilates one of his ears.

The story picks up in a post-9/11 world some 22 years later, as a disillusioned Lake, only days from being unsympathetically relieved of the job that has defined his life, is giving an impassioned speech to the CIA’s newest recruits. (“There are only two kinds of people: men of action, and everyone else.”) When Lake brings his superiors some new information regarding the current whereabouts of the supposedly dead Banir, his superiors, armed with the news of Lake’s mental deterioration, have him escorted from the premises. Symptomatic, but functional enough for one last mission, Lake goes rogue. He and Schultz hop a plane to Bucharest (terrorists always seem to leave clues in places where it’s cheap to film), following a plot that eventually leads to Kenya. Along the way, the film often cuts to the bedridden Banir, whose physical handicap makes him a perfect foil for the mentally challenged man on his trail.

The idea of two feeble mortal enemies, both of whom have become vestigial relics for the causes to which they’ve pledged their lives, is rich with potential, and it’s tempting to assume that Schrader’s cut wasn’t so weighted toward its airport-paperback plot progression. It’s tempting to imagine how he might have construed this story as a parable about the age-old grudges that callously motivate modern politics, and how so much international strife is internally motivated by countries quick to betray both their ideals and the people who fought for them. Trimmed within an inch of its life to a frail 94 minutes, however, Dying Of The Light is left with nothing but the faintest echoes of whatever ideas might have inspired its making. It unfolds with the same slapdash senselessness that defined the other two films Cage appeared in this year. But the studio’s interference is most obvious in a garishly standard score that suffocates any unique flavor that might have survived the re-editing process.