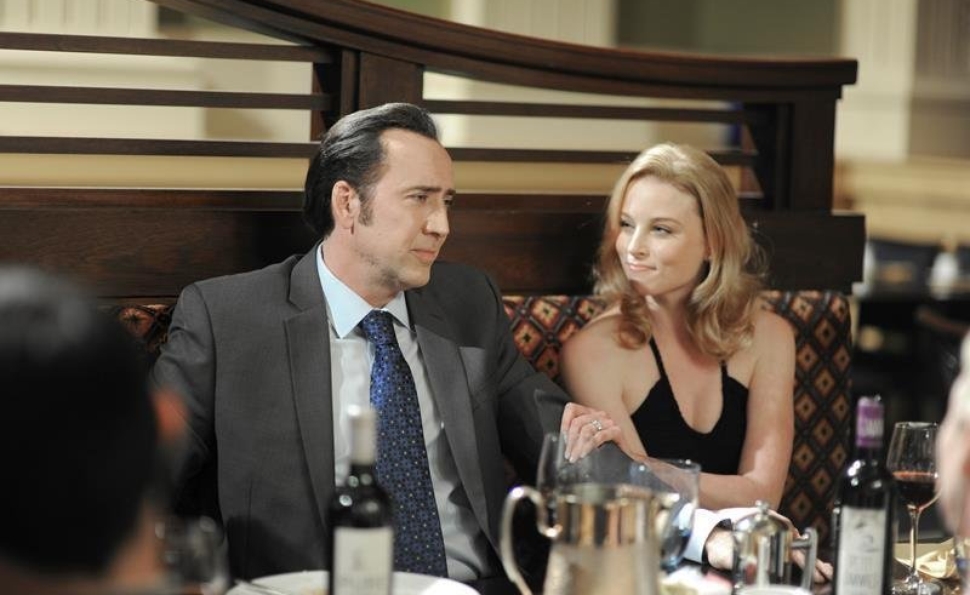 Rage is a movie about a middle-aged badass who gets very angry indeed when his teenage daughter is kidnapped. Oddly, it does not star Liam Neeson. Instead, the middle-aged badass—a reformed gangster named Paul Maguire, now enjoying success as a legitimate business tycoon—is played by Nicolas Cage. This becomes abundantly clear even for viewers with prosopagnosia (a.k.a. face-blindness) when someone who’s made a grave error in judgment attempts to explain the situation to Paul. “Paulie, you gotta listen to me. Just listen to me,” the guy stammers. “Uh-huh,” Paul replies. This is a standard conversational nicety—sometimes, people fill brief conversational pauses with phrases like “uh-huh” to signify that they’re paying attention. Here, however, Paul keeps tossing out another “uh-huh” every few seconds, without even waiting for a pause, intoning the word with a bit more intensity each time, turning courtesy into an act of naked aggression. It’s the kind of literally offbeat touch that keeps Cage interesting even in movies as generic as Rage.

Originally, the film was called Tokarev, after a Russian semi-automatic pistol that plays a prominent role in the story. Flashbacks reveal that Paul, along with his buddies Kane (Max Ryan) and Danny (Michael McGrady), ripped off the Russian mob when they were kids, killing the brother of kingpin Chernov (Pasha D. Lychnikoff). They got away with it, and Paul has long since gone straight, though he remains close to Kane and Danny, who still have various criminal ties. When masked intruders break into Paul's house and abduct his daughter, however, a ballistics report indicates that a Tokarev was involved, suggesting that Chernov has somehow discovered what happened all those years ago, and is belatedly taking revenge. Ignoring the stern warnings of the detective (Danny Glover) on the case, Paul reverts to his old behavior, as he, Kane, and Danny methodically work their way up the ladder of the Russian mob, torturing and/or murdering just about everybody they encounter along the way, until they ignite a full-scale war.

Directed with grim efficiency by Andalusian-born Paco Cabezas, Rage actually has something to say about the futility of vengeance, though that doesn’t become apparent until a climactic revelation re-contextualizes everything. Unfortunately, getting to that sorrowful ending is a real slog. Screenwriters Jim Agnew and Sean Keller (Dario Argento’s Giallo) provide Cabezas with opportunities for some stylish action sequences—many of which improbably but enjoyably involve Paul bringing a knife to a gunfight—but the lulls between are turgid or risible. Glover’s cop is a particular liability, prone to spouting awful clichés (one suspect boasts a “rap sheet as long as my dick”) and somehow able to allow Paul to walk away uncharged—in front of multiple objecting officers—following a hugely destructive high-speed chase, just because these two men share mutual respect. Worse, it takes a long time (uh-huh) for Cage to get bored with the script (uh-huh) and start actively rebelling (uh-huh). As in Joe, he mostly honors the project’s intention; in this case, less restraint would have been welcome.