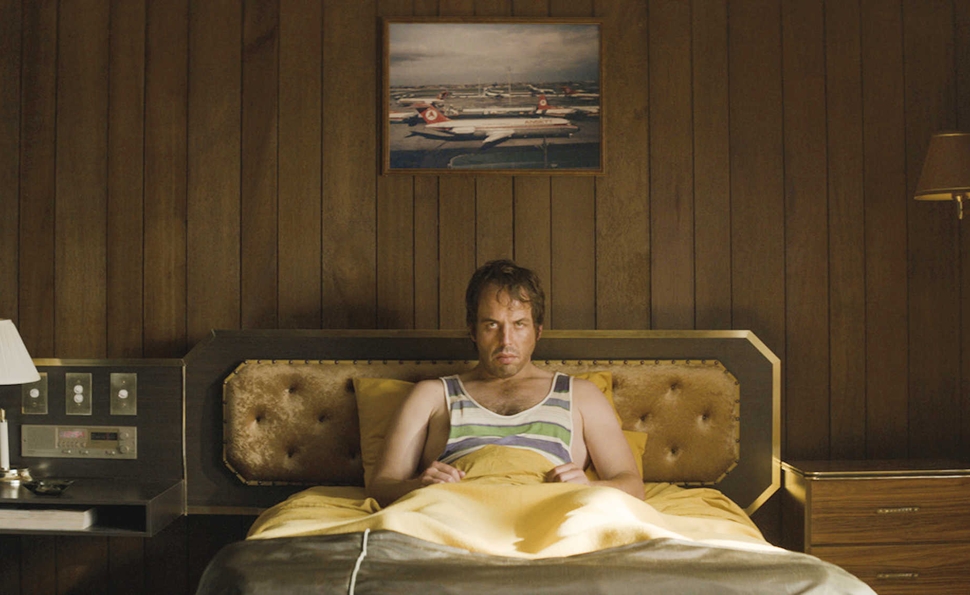 Constipation: comedy goldmine? That’s what an Australian import called The Mule aims to demonstrate, by way of a storyline in which a bunch of hard cases spend more than a week trying to intimidate a suspected drug smuggler into voiding his bowels. After about 20 minutes of prologue, the film consists entirely of people waiting for a guy to take a shit—perhaps not the most promising scenario ever conceived, at least on paper. Credit the filmmakers, including screenwriters Angus Sampson (who also plays the lead role, and is credited as co-director) and Leigh Whannell (co-originator of the Saw franchise), for making this unusual inaction movie as lively as it can possibly be, given a protagonist who’s determined to do nothing.

Just to make it more challenging, Sampson plays the ostensible hero, Ray Jenkins, as a passive lump even before refraining from defecation becomes his sole mission in life. On a trip to Thailand with his soccer team, Ray gets pressured by his friend Gavin (Whannell) into taking part in a one-time drug-smuggling deal, which requires him to swallow 20 heroin-filled condoms and avoid eating the in-flight meal. Problem is, Ray is kind of an idiot. He calls attention to himself by showing up at customs with no baggage, having stashed his uneaten meal in his carry-on bag (refusing it would have been a red flag) and then abandoned the bag. Australian law forbids the cops from X-raying a suspect’s stomach without his consent, but they can hold Ray in a motel room for up to 10 days without charging him, while they wait for nature to take its course. Meanwhile, the thug who paid for the heroin (John Noble), fearful that Ray may talk, orders Gavin to take him out. Should our hero submit to the X-ray and go to jail, or risk becoming ex-Ray?

Since there’s nothing the police can legally do to speed up the process, verbal abuse becomes their primary weapon, and The Mule’s biggest asset is the great Hugo Weaving, playing Detective Croft opposite Ewen Leslie’s less volatile Detective Paris. Best known to American audiences as Agent Smith in the Matrix trilogy, Weaving has a much wider range than that famously emotionless part would suggest; here, he has enormous presence as the latter half of the duo’s good-cop/bad-cop routine, whether he’s shouting insults directly into Ray’s face or taunting him with food items in an attempt to break his spirit. Sampson, for his part, deliberately makes Ray such a useless doormat in the early going that his late-breaking efforts to find a way out of his predicament, once it becomes literally life or death, become a real rooting interest, if only because they involve something more active than a man lying in a bed, not taking a dump.

Surprisingly, given Whannell’s key contributions to the torture-porn genre, The Mule goes relatively light on the more disgusting aspects of its premise. A scene in which Ray actually does expel the condoms in the dead of night, and has no option but to immediately down them again, will test some gag reflexes, but there’s little real body horror, and most of the inspection stuff is played for laughs. The film’s biggest drawback is its essentially passive nature, which prevents it from ever building to a crescendo. Roughly half the movie consists of variations on the standard scene in which the cops tell a suspect, “We know you hid the loot, so just tell us where it is!” The novelty involved in changing the second phrase to “…so just go ahead and crap it out!” isn’t enough to prevent the sensation of wheels spinning.