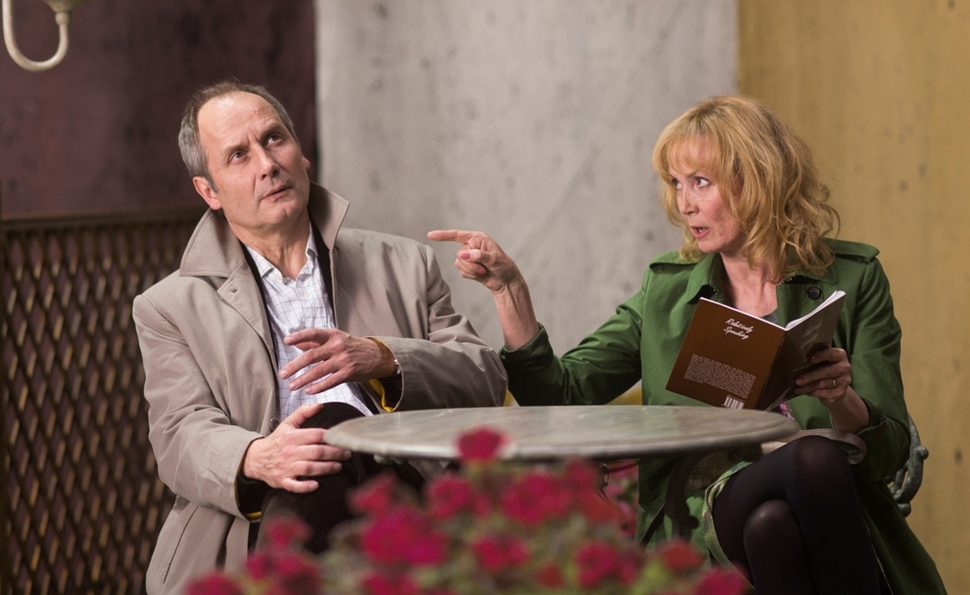 Two years ago, at age 89, Alain Resnais capped a long and venerable career (dating all the way back to 1946) with a superb meditation on death and artistic legacy called, with a sly wink, You Ain’t Seen Nothin’ Yet. Gathering most of his favorite actors together for a multivalent story that simultaneously looks back to past glory and forward to the next generation, the film, much like Robert Altman’s A Prairie Home Companion, seemed expressly designed to serve as its director’s poignant final statement. As it turned out, however, Resnais wasn’t even planning to slow down: He’d already begun work on his next film, Life Of Riley. He seemed to be aiming at joining Manoel de Oliveira (still active at 105!) in the Centenarian Filmmakers’ Club.

Alas, it was not to be. Life Of Riley did, in fact, become Resnais’ last word, as he passed away less than a month after its première at the 2014 Berlin Film Festival. It would be nice to report that it, too, makes a magnificent self-eulogy, or at least that it sends him out on a high note. Instead, it’s his weakest effort in many years, though the blame lies less with Resnais’ direction than with his choice of material. Where You Ain’t Seen Nothin’ Yet added layers of meta-reflection to plays (by Jean Anouilh) that are terrific in their own right, Life Of Riley struggles in vain to find cinematic value in one of Alan Ayckbourn’s lesser efforts.

Part of the problem is that Ayckbourn’s play already does a lot of the reflexive work Resnais likes to perform. Its six characters are mostly amateur actors, rehearsing a production of Relatively Speaking (one of Ayckbourn’s early successes, first produced way back in 1967). A seventh character, George Riley, is never seen, though constantly spoken of; he’s been diagnosed with terminal cancer, and might live just long enough to perform one last time with this community-theater troupe. Over the course of the story, it becomes clear that all three of the women—Kathryn (Sabine Azéma, now Resnais’ widow), Tamara (Caroline Sihol), and Monica (Sandrine Kiberlain)—have a previous romantic connection with George, or current romantic feelings for him, or (in most cases) both. Their offscreen attentions to him provoke consternation among their respective paramours, Colin (Hippolyte Girardot), Jack (Michel Vuillermoz), and Simeon (André Dussollier), leading to arguments that reflect the play everyone is rehearsing.

Ayckbourn’s intricate roundelays have inspired Resnais twice before, serving as the basis for 1993’s Smoking/No Smoking (adapted from Intimate Exchanges) and 2006’s Private Fears In Public Places. It’s no mystery why he was attracted to this one, given the emphasis on impending death colliding with artistic creation; George Riley, remaining off-camera at all times, even makes an obvious stand-in for the director. Unfortunately, thematic interest is all Life Of Riley offers. By Ayckbourn’s standards, these are unusually thin characters inhabiting an uncharacteristically labored scenario, leaving the talented cast stranded. Recurring interactions lack the wit and ingenuity that would prevent them from feeling dully repetitive, and it isn’t even entirely clear whether Riley is meant to be a comedy or a drama. If it’s a comedy, it’s one utterly devoid of laughs; if it’s a drama, its antic nature forestalls any deep emotion.

Resnais does his best to make the adaptation formally intriguing. Throughout his career, he was fascinated by the intersection of theater and cinema, and his Ayckbourn films always make a point of emphasizing their artificiality. Here, virtually every scene is an exterior that deliberately looks like a theatrical set, with ostentatiously fake shrubbery and carefully fixed perspectives. The novelty wears off quickly, but does eventually lead to a startling moment in which the film suddenly cuts indoors for the first time, reminding complacent viewers of the effects only a movie can produce. Another Resnais device, in which odd, decontextualized close-ups of the actors (in the middle of an ordinary scene) feature a white background festooned with hand-drawn black lines, is merely jarring and baffling. Whatever he was experimenting with in Life Of Riley doesn’t pan out, and thus can’t rescue a mediocre play. The saddest part is that we’ll never know now where those ideas might have led.