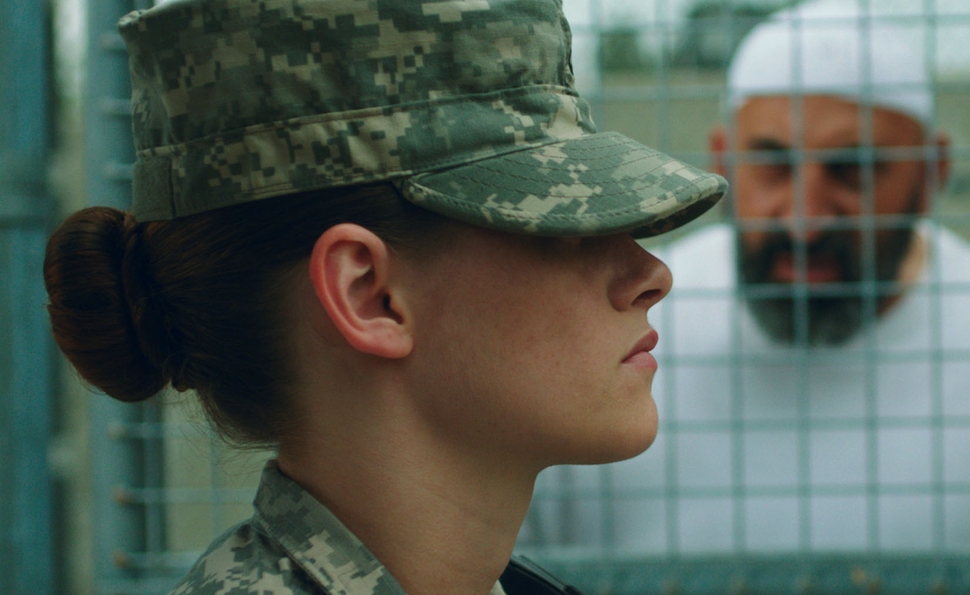 Guantanamo Bay’s most empathetic guard meets its swellest “detainee” in Camp X-Ray, a credulity-straining duet between two fine actors. Set roughly around 2009 or 2010 (though the real Camp X-Ray was closed in 2002; presumably, someone felt that the word “X-Ray” was metaphorically apropos), the film opens with the arrival of several newly transferred soldiers, including Pvt. Amy Cole (Kristen Stewart). As one of the the few women on site, Cole is determined to prove herself, immediately volunteering for tough assignments and striving to emulate the macho belligerence with which everyone treats the prisoners. (A superior brusquely informs her, when she uses that word, that they’re always to be called detainees. Prisoners are subject to the rules of the Geneva Convention. Detainees are not.) Her practiced indifference is gradually worn down, however, by the occupant of one particular cell, Ali Amir (Payman Maadi), who continually engages her in conversation until he becomes something like a friend.

Right from the start, this relationship feels like bullshit. Cole and Amir exist in a near-total vacuum, to the point where it comes as a shock to learn that first-time feature director Peter Sattler wrote the screenplay from scratch, as opposed to adapting a stage play. None of Cole’s fellow soldiers demonstrate anything but contempt for the people they guard, and Amir’s fellow detainees, when seen, are universally hostile. Amir, by contrast, is a huge Harry Potter fan whose first interaction with Cole involves asking her for a copy of Deathly Hallows, as he’s been waiting two years to find out how the story ends. (When Cole tells him she snitched on a colleague, he’s momentarily confused: “Like the Golden Snitch?”) Attempts at real complexity are negligible—Amir throws some of his feces at Cole early on, but the incident is completely forgotten the next time she sees him, and she holds no grudge. By the end, she deliberately looks away during suicide watch, giving him the choice to kill himself if he chooses. Maybe close bonds like this have really formed in Gitmo, but Sattler lacks the skill to make it play like more than a wish-fulfillment fantasy.

He’s cast the two lead roles extremely well, however, and that helps enormously. Stewart isn’t the revelation here that she is in Olivier Assayas’ forthcoming Clouds Of Sils Maria (which asks her to do more with less), but she does a superb job of silently conveying the internal struggle between Cole’s innate compassion and her desire to embody a badass military ideal. Her strained stoicism bounces nicely off of Maadi’s winningly garrulous performance, which he has to give almost entirely through a small window in the door of Amir’s cell. An Iranian actor best known for his sublime work in two films by Asghar Farhadi (About Elly and especially A Separation, in which he plays the conflicted patriarch), Maadi here makes a bid for international stardom, maintaining his charismatic self-assurance in English and effortlessly holding the screen even when barely visible. Amir is every inch a writer’s construction, but Maadi gives him life.

So engaging is Maadi’s presence, in fact, that it’s easy to overlook the fact that we’re never even told why Amir is in Guantanamo. Perhaps withholding that information was meant to underline that it doesn’t matter—that the “detainees” are human beings worthy of dignity and respect whether they did or didn’t participate in terrorist acts. A movie that genuinely feels that way, however, shouldn’t really feature 9/11 footage in its first shot, given that it’s set almost a decade later. Sattler seems wholly uninterested in politics, concentrating instead on generic humanism; nothing that might complicate the basic decency of his two protagonists is allowed to surface, and their progress toward mutual understanding is unimpeded. That’s plenty heartwarming—Amir even finally gets to learn whether Snape is a good guy or a bad guy!—but Camp X-Ray is a fundamentally toothless film, sanitized for viewers’ protection.