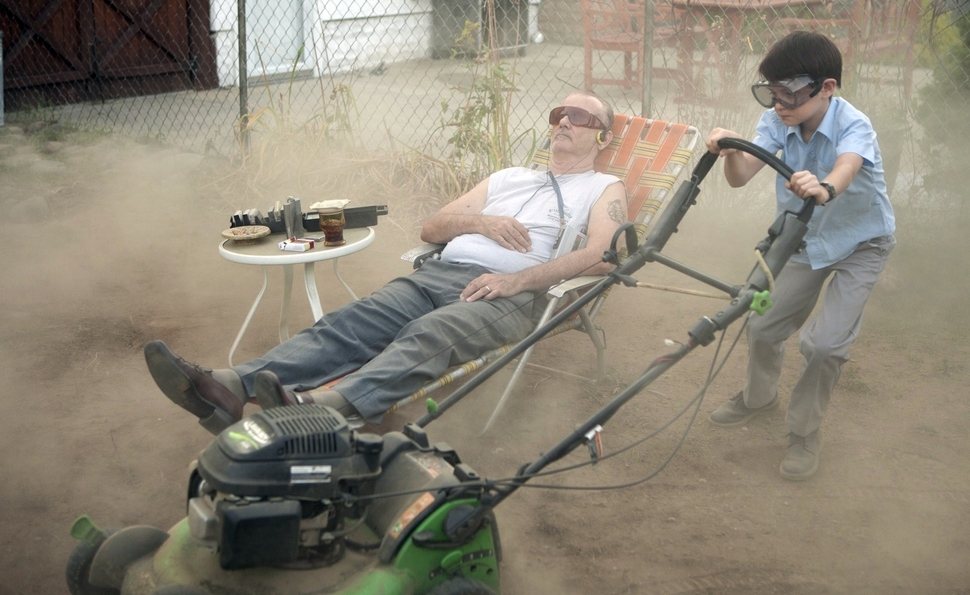 One of the contradictions of movies that focus on children is that kid-actors playing protagonists are generally gorgeous, with the kind of model-perfect looks that separate them from the rest of the kiddie thespians desperately angling for the position. At the same time, kid-focused movies overwhelmingly center on child characters who are unpopular, unloved, or bullied by classmates. So characters who would be admired for their beauty in real life are relentlessly belittled in movies because of cinematic conventions.

Sure enough, Oliver (Jaeden Lieberher), the 12-year-old protagonist of the sappy new dramedy St. Vincent, looks like a miniature Abercrombie & Fitch model, yet is nevertheless picked on before he finds an unlikely protector and mentor in the form of Vincent (Bill Murray), his drunken, gambling, whoring veteran of a next-door neighbor. Vincent only seems like an unlikely protector by real-world standards, because in movies like these, lonely children are far more likely to befriend misanthropic old people than children their own age. On a similar note, they are also much more likely to be part of loving, supportive makeshift families—the kind that might involve, say, a drunken, gambling, whoring neighbor and a sassy pregnant Russian prostitute—than part of a nuclear one.

The latest, and most maudlin, tale of Bill Murray befriending a lonely adolescent—a premise that previously gave the world the slobs-vs.-snobs pop classic Meatballs and the Wes Anderson masterpiece Rushmore—St. Vincent casts the precociously verbal Lieberher as a sad little man who moves to a new neighborhood following his parents’ divorce, and due to parental desperation, ends up with Vincent as his baby-sitter.

Vincent ends up needing the boy just as much, if not more, than the boy needs him, but for a cranky semi-hermit, Vincent sure has a suspiciously busy schedule. He’s the friend and regular customer of a heavily pregnant hooker with a heart of gold, played with a Natasha Fatale accent by Naomi Watts, and he’s the doting husband of an elegant white-haired woman with Alzheimer’s who does not recognize him. So, in a distinctly Patch Adams-like turn of events, Vincent rouses himself from his drunken stupor and stops gambling and whoring just long enough to don a doctor’s white coat so he can visit his beloved wife and wash her laundry, an early indication that he might be more saintly than his cantankerous, profane exterior suggests.

St. Vincent is full of such indie clichés. Oliver goes to one of those Catholic schools where the teachers seem to be workshopping material for open-mic stand-up sets, and the lessons invariably dovetail with whatever the protagonists are going through. So when Oliver and his classmates are asked to locate and pay tribute to someone they know who might qualify for sainthood, it’s achingly apparent who they’re going to select. (Here’s a hint: the film’s title.)

Melissa McCarthy is wasted as Oliver’s concerned mother. It’s hard to say what could possibly have attracted her to a role so thankless and vanilla, beyond an opportunity to act opposite Murray, and a big speech where her character artlessly unpacks her backstory, and her son’s. Murray, on the other hand, gives a real performance. He breathes life and soul into a stock curmudgeon, but over the past few years, he’s shown an unfortunate predilection for the kind of sentimental middlebrow hokum he assiduously avoided early in his career. St. Vincent is even sappier and more committed to yanking heartstrings and manipulating emotions than Hyde Park On Hudson or The Monuments Men, and ultimately even more precious and treacly.

St. Vincent concludes with a sequence of Bill Murray singing along to Bob Dylan’s “Shelter From The Storm” on a Walkman. (The scene was released online as an inducement to see the movie.) In this lovely moment, Murray is liberated from the plot’s cornball demands and the film’s sticky sentimentality, and is free to just exist. It’s far and away the film’s best moment, and it makes everything before it seem even more contrived and unnecessary by comparison. Anyone who has watched that sequence online has already seen the best St. Vincent has to offer, and could only be let down by the crowd-pleasing phoniness of the rest.