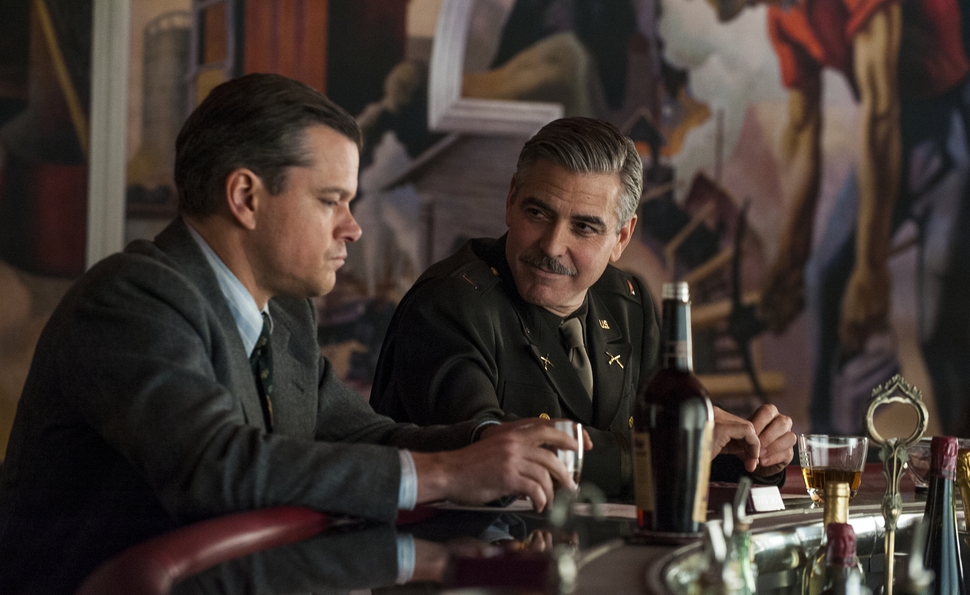 The phrase “handsomely mounted” generally has a negative connotation when directed toward movies. Museum pieces, deer heads, and military campaigns are mounted; great films are more often created through a feverish, passionate intensity that’s sorely lacking in “handsome” films. That description is reserved for projects distinguished by lovely costumes, expensive sets, pedigreed casts, workmanlike direction, impressive production values, and a fundamental central inertness that no amount of beautiful scenery or stirring music can disguise. And it’s the perfect phrase to praise/condemn The Monuments Men, George Clooney’s glossy tribute to the real-life story of the everyday men who helped save a bounty of priceless art from being destroyed by the Nazis during the waning days of World War II.

The film is a flag-waving tale of derring-do that would feel anachronistic even if the premise of George Clooney leading an unlikely team of misfits and oddballs on a perilous quest wasn’t already the template for superior films like Ocean’s Eleven, its sequels, and Fantastic Mr. Fox, many of which share cast members with The Monuments Men. Clooney is among the youngest of the monuments men, but even he, as Lethal Weapon would put it, seems to be getting too old for this shit.

A mustachioed, more-heroic-than-usual Clooney stars as Frank Stokes (based on real-life veteran George L. Stout), a conservator tasked with assembling an unlikely crew of art lovers to locate and retrieve artworks in danger of being destroyed by the Nazis or repurposed for the grand opening of the Führer Museum, Hitler’s dream haven for Europe’s greatest culture. The gang includes rival art collectors Richard Campbell (Bill Murray) and Preston Savitz (Bob Balaban), Frenchman Jean-Claude Clermont (Jean Dujardin), cane-wielding architect Walter Garfield (John Goodman), and a green recruit from New Jersey (Dimitri Leonidas) roped into the gang because he can speak German. These are men with long histories, yet Clooney reveals precious little about them. He apparently imagined, with reason, that his cast’s charisma and magnetism would fill in the cracks in the film’s flimsy screenplay. But they still seem partially realized at best, woefully underwritten at worst.

Since movies are intrinsically visual, Clooney misses out on a fantastic opportunity to show rather than tell by actually filming the glorious treasures at stake. Instead, the screenplay perversely contains lots of lofty talk about the great art of the ages being an inheritance for all humanity, but the film is maddeningly short on actual images of artwork. It uses great paintings as props—no different, ultimately, than chairs, lamps, or fake guns.

Even after members of the motley crew of art-savers begin dying, the film is strangely short on action and urgency. That’s partly attributable to the wind-down of a war that had reached its endgame. But audiences could be forgiven for imagining they’re watching a film about pleasant elderly gentlemen whose group tour of Europe is intermittently interrupted by unwelcome Nazi visits and reminders of the Holocaust’s death camps.

The Monuments Men shakily attempts to walk a tonal tightrope, mostly keeping the action light and goofy, but finding time for regular reminders of the grimness of a war that destroyed people and countries, in addition to museums. So while the film is often playful, it never attempts to be particularly funny, perhaps out of a fear that too much levity in a World War II-themed movie would be in poor taste. Instead, it loads on great quantities of tacky crowd-pleasing moments and clichés, like the dashing officer who dramatically proclaims his glorious, never-to-be-realized dreams shortly before being killed, in a trope that should have been retired after Hot Shots spoofed it so adroitly.

In perhaps the biggest moment in a film full of them, Murray’s kindly grandfather receives a homemade album from his family, and is moved to tears by the sounds of his granddaughters singing him a Christmas song. The sequence is no less effective for being unabashedly corny and maudlin, but Clooney can’t help piling on. It isn’t enough for a soldier far from home to be tenderly reminded of all he’s left behind and all he’s fighting for; no, the film needs for the song to be perfectly recorded, delivered with such confidence and operatic professionalism that it becomes a major distraction. Though the rest of the film isn’t so guiltily effective, the sequence represents The Monuments Men in a nutshell: the kernel of a riveting true story massaged and exaggerated into glossy fiction, a movie-movie moment in a film with precious little regard for the brutal realities it’s ostensibly documenting. Like far too many misfiring prestige films, this attractive mediocrity all but nominates itself for an Academy Award before it’s done anything to prove itself remotely award-worthy.