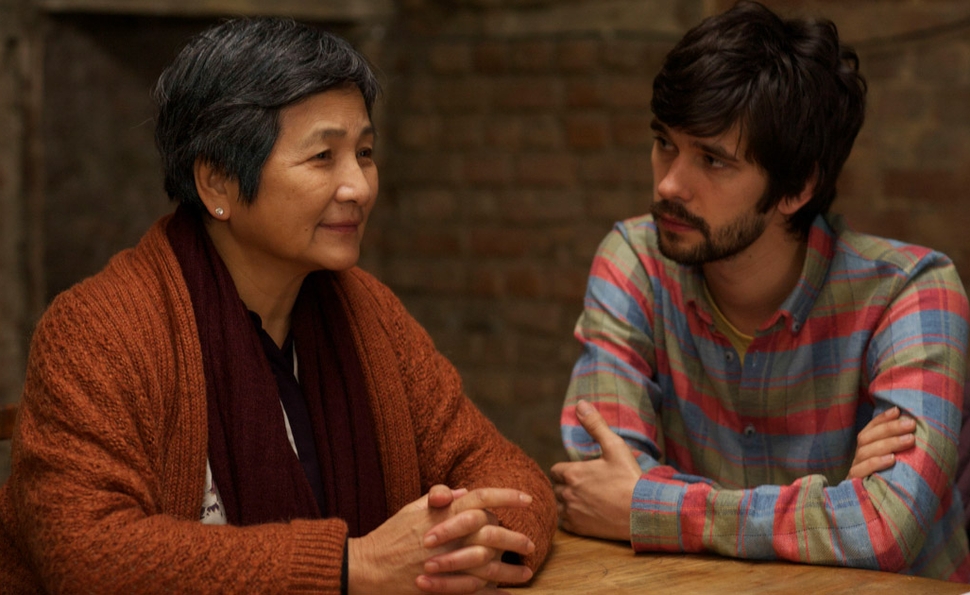 A story of cross-ethnic, cross-generational friendship (with a gay angle), Lilting has its heart in the right place, assuming the right place for one’s heart is on one’s sleeve. Words like “tasteful,” “sensitive,” and “earnest” are inadequate to convey just how little edge this well-intentioned, mediocre Sundance alumnus possesses. (It premièred in the festival’s World Cinema section, which, to put it kindly, does not tend to be a repository of unsung global talent.) Even the film’s title, never spoken onscreen, accurately suggests that first-time feature writer-director Hong Khaou has made the cinematic equivalent of a pan-flute solo.

Frankly, saying anything negative about Lilting is no fun at all. It’s so darn nice! There’s a smidgen of potential tension in the opening scene, which sees an elderly Cambodian-born woman named Junn (Cheng Pei-pei, best known to Americans as Jade Fox from Crouching Tiger, Hidden Dragon), who emigrated to London and is now living in a nursing home, receiving a visit from her adult son, Kai (Andrew Leung). When somebody else enters the room, it becomes apparent that Kai isn’t really there, and subsequent dialogue reveals that he recently died. Is Junn losing her mind? No, because Kai’s live-in boyfriend, Richard (Ben Whishaw), also imagines his presence from time to time, reliving conversations they’d had when he was alive. It’s just their way of grieving, and their ghostly versions of Kai are never anything but devoted.

Back in the real world, however, Junn has no idea that Kai was gay, and thinks Richard, whom she didn’t much like, was just a platonic roommate. Richard, for his part, is worried about how Junn will cope in the nursing home now that Kai, who looked after her, is gone. When he learns that Junn has become romantically involved with another resident, Alan (Peter Bowles), though neither knows the other’s language, Richard hires a woman named Vann (Naomi Christie) to translate for them. In the process, however, Vann also translates increasingly intimate conversations between Junn and Richard, inevitably leading to the moment in which Richard explains the true nature of his relationship with Kai.

Everybody’s intentions here are strictly honorable, and that’s precisely the problem. Apart from the language barrier, which Vann’s presence quickly dismantles, the only real source of conflict is Richard’s reluctance to tell Junn the truth; nearly every scene has him blurt something candid about his feelings for Kai, only to immediately tell Vann, “Don’t translate that.” (Translation to viewers: “Nope, sorry, still withholding any real drama for later.”) Within the limitation of their roles, all the actors do solid work—Cheng is particularly strong, often reacting first to an English speaker’s tone, then to the actual words as they’re translated for her—but the movie’s tone is doggedly, almost noxiously sincere, verging on downright moist. Khaou makes only a few feeble attempts at light comedy (mostly involving Vann’s efforts to downplay Alan’s horny-old-man remarks), and there isn’t a moment of anger or frustration in Lilting that isn’t ultimately rooted in tenderness. Richard initially refuses Junn’s request for Kai’s ashes, for example, but that’s only because he wants to scatter them in a place Kai loved… and he hands them over, apologizing for his selfishness, the next time he visits Junn at the home. That’s admirable. Mature. Considerate. And boring.