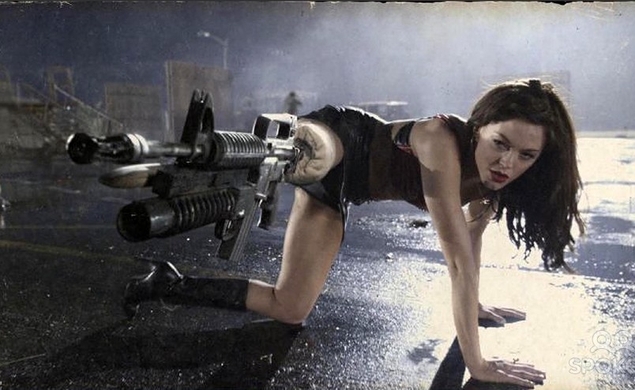 Harbinger of doom: Rose McGowan vs. the entertainment industry, a story told in three parts
It’s been a long week full of confusing, piecemeal news stories about Rose McGowan. Let’s break down what the hell happened:

Act 1: In which our fair heroine dares vaguely insult Adam Sandler
Last week, actress, director, and human woman Rose McGowan posted a tweet mocking one of what must have been eight million casting notices she’s been sent throughout her career:

casting note that came w/script I got today. For real. name of male star rhymes with Madam Panhandler hahahaha I die pic.twitter.com/lCWGTV537t

This tweet originally made our “sign of hope” section. It was particularly brave for McGowan—an actress whose career is still recalibrating a bit—to publicly call out one of our generation’s most “successful” (financially) racist, sexist male stars, rather than demean herself for a paycheck. This was a small but significant act of rebellion: A woman who not only refused to be objectified, but went so far as to speak up about it, almost certainly knowing there would be fallout career-wise.

Act 2: In which our heroine is unceremoniously dropped from her agency
Roughly a week later, McGowan tweeted again, this time letting her followers know she’d been fired by her agent because of her Sandler-related comments. Which is utterly batshit, and a perfect object lesson in Hollywood sexism: Women in the entertainment industry (and in the world) are afraid of speaking up about the shit they go through, because when they do, they’re all too often punished for it.

I just got fired by my wussy acting agent because I spoke up about the bullshit in Hollywood. Hahaha. #douchebags #awesome #BRINGIT

The awesome thing about being an artist? You can't be fired from your own mind. #FREEDOM

That latter tweet is encouraging, though, and smart; clearly, McGowan knew it’d be better to double down on her remarks rather than apologize to her agency or Sandler. She said as much in an ensuing interview with Entertainment Weekly:

“[The casting call] was just so dumb. I was offended by the stupidity more than anything. I was offended by the fact that went through so many people’s hands and nobody red flagged it. This is normal to so many people. It was probably even a girl that had to type it up. It’s institutionally okay…The wardrobe part was dumb enough. The part that made me laugh was where it said, ‘Make sure you read the script so you understand the context of the scene.’ [laughs] That was the part that made me laugh the hardest. I’m not trying to vilify Adam Sandler. Although someone did tell me that when he did his Netflix deal, he said, ‘I signed with Netflix because it rhymes with Wet Chicks.’ I mean, what? What in the f–k is going on? No!…It’s just the institutional stupidity and the institutional infantilization of actresses. Like an actress isn’t going to look like her A-game. We need to remind her. My favorite part was the parenthesis: ‘push up bras encouraged.’ ”

Act 3: In which the public outcry from our heroine’s “firing” causes the firer to become the firee, maybe? This part is weird.
This is where shit gets confusing. Soon after McGowan’s second tweet, news broke that  McGowan’s agent, Sheila Wenzel, had been let go from Innovative Artists due to the fact that she’d fired McGowan. But McGowan took to Twitter again to clarify:

Sheila Wenzel is a wonderful agent that ceased working with Innovative before my firing. She's a good, strong woman I'm proud to know.

Variety is now reporting that “Wenzel’s absence possibly had something to do with the agency’s decision to let McGowan go”; in other words, Wenzel may have left when she realized other agents were conspiring to drop McGowan in light of her comments.

It’s hard to gauge exactly what’s going on here, but what is clear is that while this is a moral victory for McGowan (and, to get cynical for a sec, is garnering her a lot of publicity), she's now without an agent, and her agency felt more strongly about defending the Adam Sandlers of the world than standing by McGowan—sending a strong and unmistakable message that it’s not okay to speak up for yourself, for women, or for what’s right, if it gets in the way of The Biz. What’s also clear is that Adam Sandler remains an unrepentant dick. McGowan’s directorial debut, Dawn, is available for free on her YouTube channel. Pull that up next time somebody suggests watching Big Daddy.

Overall, was this a good, bad, or neutral week for women in movies, Rachel?
This was a light week overall, but a bad one, to be sure. This Rose McGowan thing is unacceptable—I’m hoping the story takes a turn for the better next week, and some badass feminist agent hires McGowan and the two take the entertainment industry by storm, calling out sexist bullshit and tearing down the Adam Sandlers of the world one by one. Until then, though, we’ve got an actress who’s been punished for pointing out the obvious (and obviously terrible); meanwhile, Adam Sandler’s still pulling in millions of dollars for his tossed-off, unfunny, racist fare. Oh, and this isn’t technically Female Stuff, but it deserves a mention: Stan Lee has mandated that Peter Parker always be a straight, white dude because “we originally made him white. I don’t see any reason to change that.” He went on to say “I have no problem with creating new, homosexual superheroes.” O RLY? Get to it, then, bro.