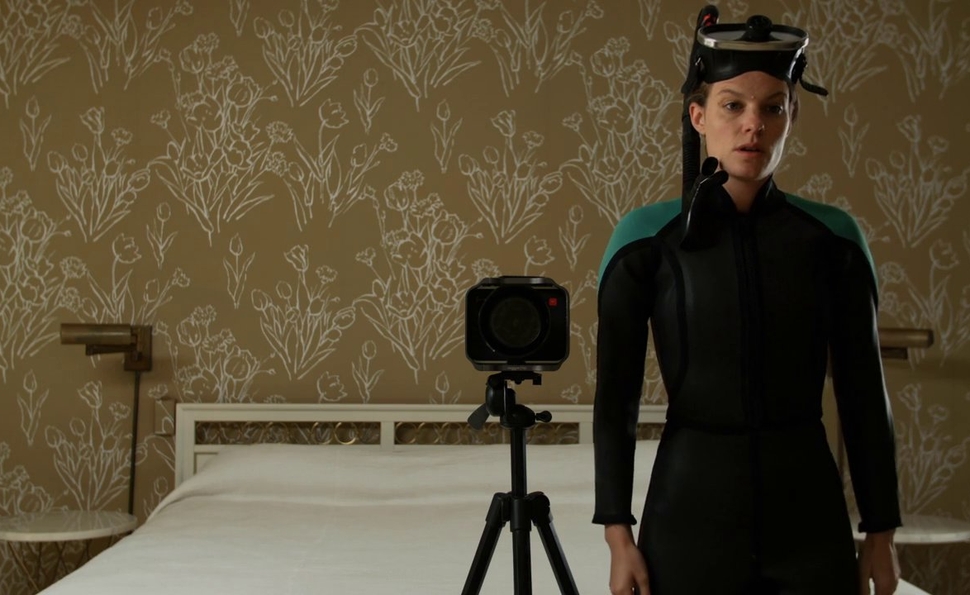 The Groan-O-Meter goes on standby a few minutes into The Midnight Swim, once it’s clear that all the shaky camerawork and POV shots of bare feet are meant to be taken literally. Yes, this is a found-footage movie. It blessedly doesn’t see a need to explain how all the footage survived, but it’s a found-footage movie nonetheless. At least Sarah Adina Smith, making her debut as writer-director, is trying to do something more than a blah horror exercise. The film takes the form of a psychological family drama with horror touches, as three sisters return to their childhood home on the occasion of their mother’s disappearance into the majestic blue lake that sits alongside the property. (It’s called Spirit Lake, naturally.) They aren’t there to investigate, just to reminisce and debate what to do with the house. June (Lindsay Burdge), who has some degree of mental illness, has appointed herself family documentarian, carting her video camera everywhere. The other two siblings, Annie (Jennifer Lafleur) and Isa (Aleksa Palladino), jokingly summon the spirit of a local ghost, which is always a great idea.

A few dead birds turn up, a mysterious shawl goes from lake finding to accessory, and the sisters love going for dangerous night swims. Mysterious footage of the lake shows up on June’s camera. What’s going on here—a haunting? Or just a breakdown? The film walks a fine line between unsettling and aimless, retreating into banalities as soon as it seems ready to make some unique statement. The few tidbits Smith parcels out about the family matriarch—she was a hardcore ecologist, entirely devoted to the lake, and may have mentally abused the sisters—create an incomplete picture. Annie and Isa’s dispute over the house, informed by how the characters are separately processing grief, is a too-familiar story: One wants to sell it, the other wants to preserve it and maybe also turn it into some kind of utopian artists’ commune. Then there’s the dopey presence of Josh (Ross Partridge), a handsome gentleman next door who used to be June’s crush, but becomes infatuated with Isa instead. An elderly neighbor is on hand to helpfully explain the legend that’s freaking everyone out. These events create the sensation of a forward march, without ever actually marching.

The most unsettling scenes seem to exist independent of the film that houses them. A sister stares into the distance on a boat, the wind violently whipping her mystery shawl. The trio perform an unprompted lip-dub video set to “Free To Be… You And Me.” June, sensing an argument unfolding, steps out of the frame of her stationary camera so she can pick it up and become an observer instead of a participant—the film’s single best moment of characterization. And the fascinating final frames offer a metaphysical twist that continues into the end credits, after some sort of closure would normally be expected. It’s ballsy for a film to wait until the end (really, after the end) to play its trump card, when there may not be many viewers left in the theater to care.

Perhaps it’s a case of the first-film jitters that the whole movie isn’t like these standouts, that Smith keeps playing it safe in the shallow end. But the tonal dissonance is too jarring. In a heartbeat, the film leaps from imagery strange enough to awaken something in the audience back to lifeless dialogue. And, as so often happens when found footage is involved, the built-in subjectivity of June’s in-film camera too often becomes a dramatic crutch rather than a stylistic innovation. Burdge, Lafleur, and Palladino are effortlessly believable as sisters, but that only makes it seem like a shame that the script doesn’t take fuller advantage of their innate chemistry. No one’s ever seen the bottom of Spirit Lake. Maybe they should dive deeper.