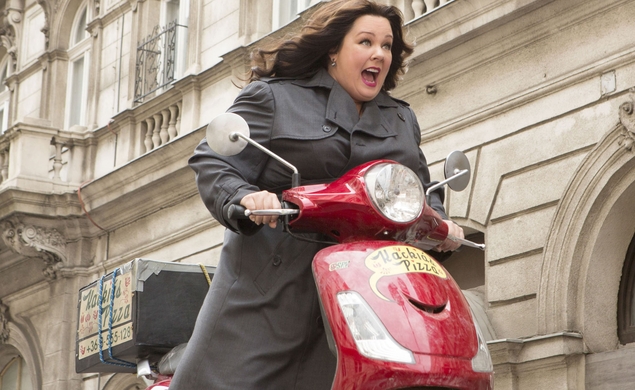 Harbinger of doom: Women aging in movies (...in that they are not)
A few weeks ago, Maggie Gyllenhaal spoke out about how she’d recently been turned down for a lead role because, at 37, she was “too old” for her 55-year-old male co-star. At the time, I placed her quote—which was inspiring in its resilience and good humor, and in the fact that it incited such outrage—in the “sign of hope” column. Gyllenhaal’s story was a microcosm of a well-known, industry-wide issue—“The Last Fuckable Day”—that we’ve all been bemoaning for years, and one that, hopefully, by bemoaning, we’re slowly helping to erase. I was optimistic that Gyllenhaal’s quote and the rippling rage it induced was a sign that we were already heading in that direction as a culture.

Bad news, guys. We’re not. At least not yet. This week brings the cold, hard proof that things are still as bleak as ever in terms of double standards when it comes to aging—and romance—in Hollywood. After Gyllenhaal’s remark, IndieWire's Stephen Follows crunched the numbers, looking at 422 romantic films (“rom coms” and romantic dramas) that grossed over $1 million at the box office and were released between 1984 and 2014. Here are the highlights…er, lowlights:

Those last two are unsurprising, but still troubling. Stephen notes that 88 percent of the movies he looked at were directed by men, and that the average age gap was 4.53 years—Sydney Pollack, that dirty dog, had the largest average age gap in his movies at 16 years and five months. But in films directed by women, men were, on average, 4.16 years older than their female co-stars. Which is only slightly better. Clearly, nobody’s immune to the pressure to pair young women with old dudes.

Vulture’s Kyle Buchanan unpacks the problem more specifically looking at how three of today’s most in-demand actresses—Emma Stone, Jennifer Lawrence, and Scarlett Johansson—are almost always paired with men old enough to have fathered them. The most recent standouts: At 40, Joaquin Phoenix will romance a 26-year-old Stone in Woody Allen’s Irrational Man; in the upcoming Joy, Edgar Ramirez, age 38, will play the love interest of 25-year-old Lawrence; a 47-year-old Mark Ruffalo just smooched a 30-year-old Johansson in Avengers: Age Of Ultron.

As IndieWire’s Follows puts it, “Art and culture influence how we live our lives and what we regard as ‘normal,’ and the film industry is a big part of that.” He illustrates this briefly by looking at OKCupid data, which shows that as women grow older, they seek out men their own age (or a few years younger), but as men grow older, they never stop seeking out those 21-year olds. Guess almost all of us are past our prime, ladies. Better pack it in.

Harbinger of doom: SAG-AFTRA’s scrapped diversity study and its vague-ass plans to compensate for the cancellation
According to Deadline, The Screen Actors Guild—American Federation of Television and Radio Artists (also known as SAG-AFTRA—catchy!) has “scrapped its plans to conduct a comprehensive five-year survey of the employment of women and minority actors in the film and TV industry.” Oof.

SAG used to release these types of reports annual, then every other year, then, in 2009, halted them altogether. Last year, the guild’s “top diversity official” Adam Moore (what a title, what a world) told Deadline the org was working on “the first truly comprehensive picture of the employment landscape for women and minority actors and hopes to release it within a year.” Now, he’s like, “Oh, just kidding.” “The short version of any numbers that SAG-AFTRA might put out would simply be that our information is consistent with what can be found in published reports,” he told the outlet in a statement. Translation: “Other people like Geena Davis already did sort of similar studies, and they seem expensive, so we’re just going to…not.”

There’s a much longer statement from Moore over at Deadline; the gist of it is that instead of spending the money on a study figuring out where the industry’s broken (hint: over yonder by the womenfolk and everyone who is not white), they’re going to look at existing info, then spend money finding “more and better jobs for all of our members.” How nice, but how vague, you say? The most concrete detail Moore offered is that the “EEO & Diversity department is in the process of hiring a Director of Policy Strategy & Analysis to better refine our ability to translate what we’re seeing on-screen – and what we aren’t – into the most effective action possible.”

This is all nonsensical corporate doublespeak, but cutting to the heart of it, I’m basically disappointed in this entire thing. It all feels a little hopeless, the equivalent of some massive corporation touting its Corporate Social Responsibility Efforts (TM). Sure, had SAG gone ahead and completed the study, there’s no guarantee that 1) anybody would listen or care or 2) it would affect real change. But at least it would give us more sprawling and concrete data to point to, things to Talk About When We Talk About Female Stuff. And while I do appreciate that instead of just ignoring the problem of gender and race parity altogether, they’re going to look at ways to “solve” it, but they’ll have to do a lot more than just throw cash and a Director Of Policy Strategy & Analysis in its general direction. I know nothing about the restrictions placed on SAG in terms of where they can hurl their cash, but if possible, why not hurl it in other, more tangible directions instead, like at female directors, or woman-centric films, or woman-centric screenwriting workshops, or Geena Davis, so she can do some more cool shit with it?

Sign of hope: Male directors responding to charges of sexism and whitewashing
Two male humans stepped forward this week and attempted to make amends for the wrongs they’d committed against the female population/everyone on Earth who is not white. Let’s review:

Cameron Crowe apologized for casting very white person Emma Stone as a woman with Chinese and Hawaiian heritage in Aloha, a choice that, as Charles put it on Tuesday, “rankled a moviegoing public tired of seeing nonwhite roles awarded to Caucasian actors.” On his blog, appropriately titled The Uncool, Crowe wrote, “far back as 2007, Captain Allison Ng was written to be a super-proud ¼ Hawaiian who was frustrated that, by all outward appearances, she looked nothing like one. A half-Chinese father was meant to show the surprising mix of cultures often prevalent in Hawaii. Extremely proud of her unlikely heritage, she feels personally compelled to over-explain every chance she gets. The character was based on a real-life, red-headed local who did just that.”

This is far from a perfect apology (is it even an apology?). In fact, it’s a really annoying way to explain it (“this once happened in real life, I swear, so my choice to whitewash the role is totally fine!”). All of it bugs me, and I’m still pissed off about the missed opportunity to cast criminally underused native Hawaiian actors. BUT. The public mea culpa does show that Crowe’s listening to his audience and, hopefully, learning something. At the very least, he’s being held accountable for this particular egregious error in Aloha, and maybe he’ll remember this the next time he’s writing a weird, bad movie. If nothing else, there’s a silver lining: The amount of thinkpieces and #hottakes this week centering on the problem of whitewashing. Let’s keep getting angry and let’s keep talking about this stuff.

But this week, during an interview with BadTaste, Trevorrow explained that sharing the clip out of context was a strange choice on Universal’s part: “I wasn’t bothered by what he said about the movie and, to be honest, I don’t totally disagree with him,” he said. “I wonder why [Universal] chose a clip like that, that shows an isolated situation within a movie that has an internal logic. That starts with characters that are almost archetypes, stereotypes that are deconstructed as the story progresses. The real protagonist of the movie is Claire and we embrace her femininity in the story’s progression. There’s no need for a female character that does things like a male character, that’s not what makes interesting female characters in my view. Bryce and I have talked a lot about these concepts and aspects of his character.”

Trevorrow went on to defend Joss against his Avengers critics, noting that he “was upset about people’s reaction to his film. Joss received an incredible amount of anger and vitriolic comments and he doesn’t deserve that, because if there is someone who has always paid due respect to the women of his movies that guy is Joss. I think he should be the last person in Hollywood to be accused of sexism and if you’ve seen something like that in his last movie it’s not his fault. We all know that Joss is too kind and polite to rise up and tell people to screw off, so I’ll do it on his behalf!”

The Mary Sue put it best and most succinctly: “Trevorrow and Whedon both benefit immensely from Hollywood’s systemic gender bias, to the point where Trevorrow’s gender has won him films that a female director with similar prior experience would never be considered for. (Previously Trevorrow had only worked on indie features; his ‘big break’ came when Brad Bird recommend him for the Jurassic franchise by saying ‘there is this guy who reminds me of me.’ Dudes beget more dudes.)” That in mind, it’s heartening to see both take sexism so seriously, and try to combat it in their work. We’ll have to wait and see whether Trevorrow was successful in doing so with Dallas Howard’s character.

Overall, was this a good, bad, or neutral week for women in movies, Rachel?
This week wasn’t great. Our biggest signs of hope should have an asterisk next to them that indicate they’re *not good enough. Yes, some dudes thoughtfully replied to charges of being sexist and thoughtless, but on both counts, the damage has been done. Aloha is currently terrorizing audiences all over the country, and Jurassic World will enter theaters soon; it remains to be seen whether Bryce Dallas Howard’s stuffy character is more than just a white background on which to project a colorful Chris Pratt. Yes, the Transformers writing room has women in it now, but only two, and also, it’s a fucking Transformers writing room. And our harbingers of doom are pretty doom-y—little is improving for women who have the gall to age in Hollywood, and SAG is scrapping its “state of the film industry” studies and making vague claims about how it’s working to affect change for women and minorities in the industry. Any of you women who are 21 or older, please spend the weekend reminding everyone you meet that you are no longer sexually viable. See you guys next week!