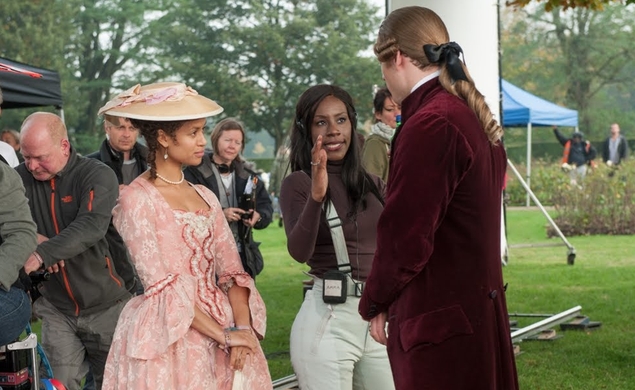 Our affection for Amma Asante’s Belle has been well-documented in this space (an important refresher is located right here), so the news that the filmmaker has lined up a new project—and one that sounds so wonderfully in line with her interests and talents—is cause for massive celebration around Dissolvetown.

The Hollywood Reporter shares that Asante is again tackling a fascinating, fact-based period film that boasts a story rooted in the joys of romance and the pain of racism, essentially a perfect companion piece to her own Belle. Asante will direct A United Kingdom, billed as a “racial drama” that is currently lining up its cast, which will likely include David Oyelowo and Rosamund Pike, who are still in negotiations to star in the feature.

It’s like the best stuff of 2014 is joining forces into its own version of a cinematic Avengers. We’re so sold.

Penned by Guy Hibbert (Five Minutes Of Heaven, the upcoming Gavin Hood-directed Eye In The Sky), the film will tell “the true story of Seretse Khama, a member of the royal family in the country of Bechuanaland, a former English colony and south African nation that would one day become Botswana, with Khama serving as the country's first president. But prior to that, Khama sparked international outrage when he married a white woman in 1948. He survived a deposition attempt by his uncle, only to face opposition from South Africa, where interracial marriage was illegal, which forced Great Britain to ban him from his home country in 1951.”

Khama’s wife, Ruth Williams, was popular despite the taboo-smashing nature of their relationship, but their marriage caused plenty of problems for Khama and his country. Oyelowo, who is also producing the film, deems the film an “epic love story,” which fits firmly in line with Asante’s abilities and sensibilities. It’s rare to see a pairing this perfect, but Asante and A United Kingdom sure sound like their own brand of epic love story.

The film is looking to start production in October, making it Asante’s first post-Belle offering.