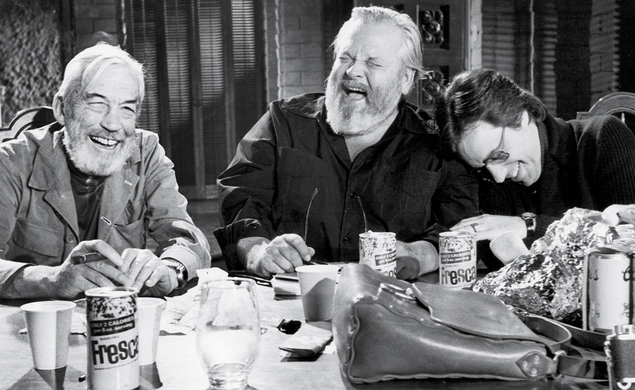 Rampage 3: No Mercy
The elevator pitch: Uwe Boll’s more fun as an Andy Kaufman character than an actual filmmaker, but even so, you have to admit you’re a little curious about how he’ll end his brain-dead, majestically terrible Rampage trilogy. In this final installment, man-on-the-warpath Bill Williamson (seriously) continues his campaign of wanton destruction and brutality. Knowing the ol’ Boll weevil, expect a lot of exploding heads and a biblical flood of fake blood.
Budget: $55,794
Runs until: June 12, 2015
“Shut Up And Take My Money” factor: This project really only appeals to that masochistic subculture of moviegoers intent on punishing themselves with exhaustingly unpleasant cinema. (We have support group meetings in a JCC basement every other Tuesday night.) But for those with sufficient self-destructive impulses, nobody does badness like Uwe Boll. He’s the Michael Jordan of not being the Michael Jordan of filmmaking.
Most rewarding reward: For a contribution of $2,232, donors will receive the actual armored costume that Bill Williamson donned for his indiscriminate killing sprees in the first two installments of the series. With armored plates covering a sleek black design, it’s both fashionable and functional. Versatile, too—appropriate for everything from a first date to sitting shiva to your court hearing!

The Paradise Garage Movie: Larry Levan & Michael Brody Story
The elevator pitch: Beginning in 1977, the Paradise Garage reigned as the greatest dance club on the planet for a glorious, filthy, debauched decade. Legendary disc jockey Larry Levan and club owner Richard Brody created an experience unlike anything had come before and unmatched since, a cacophony of sounds, styles, and sensations. To its numerous regular attendees, the drug-fueled all-nighters were referred to as “Saturday Night Mass.”
Budget: $175,000
Runs until: June 3, 2015
“Shut Up And Take My Money” factor: The Paradise Garage culture is a fascinating chapter in modern musical history, leaving a huge influence on the generations of record-spinners that followed. (In his epochal single “Losing My Edge,” LCD Soundsystem bandleader James Murphy humblebrags, “I was there, in the Paradise Garage DJ booth with Larry Levan.”) This might smack a little sense into the legions of molly-hoovering EDM fans clogging mainstages at festivals around the country.
Most rewarding reward: At the $1,500 donation level, you can claim a 2-to-3-foot scale replica of the neon sign that welcomed party monsters to the Paradise Garage. It’d look great in a foyer, the perfect thing to say, “I was very cool when I was younger, and as I’ve aged, my coolness has not diminished, only taken new shapes.”

Rooftop Films: Time Machines, Tangerines & Electric Queens
The elevator pitch: Rooftop Films coordinates outdoor screenings on rooftops through the five boroughs. New Yorkers can enjoy a clement night breeze, a little live music, and a rousing feeling of community with fellow cinephiles as they take in the latest in indie cinema. This year’s programming includes films Tangerine, Krisha, Goodnight Mommy, and The Wolfpack.
Budget: $10,000
Runs until: May 26, 2015
“Shut Up And Take My Money” factor: For most cinephiles, the prospect of going outside ranks somewhere between an emergency root canal and that thing where you trim your fingernails too far down to the fleshy part. But outdoor screenings can be a lovely time, and that’s a formidable programming slate. Romantic, too—perfect for city-dwellers trying to find something fun and low-pressure to do with a crush.
Most rewarding reward: A donation at the $50 level earns a sort of survival kit from Rooftop Films, complete with fly shades, a tote bag for responsible trips to Whole Foods, a cozy blanket for windy evenings, and a pair of tickets for you and a friend to any screening. All that’s missing is a subtle cabernet sauvignon, and there’s the recipe for a perfect night.

The Other Side Of She Wind
The elevator pitch: Over the course of his long, rocky career, Orson Welles directed more works of genius than can be counted on one hand. He was mishandled by the Hollywood studio system at every turn, the final indignity being his inability to complete post-production on his final film, The Other Side of the Wind, prior to his death in 1985. Using the surviving footage, an effort to cobble together a finished film has almost been realized. Almost.
Budget: $2,000,000
Runs until: June 16, 2015
“Shut Up And Take My Money” factor: It’s a new film from Orson Welles. I feel like that’s all that needs to be said here. But hey, don’t take my word for it, here’s Noah Baumbach and Wes Anderson doing the advocating for me.

Most rewarding reward: For a measly $350, the film’s producers will send you a customized monogrammed terrycloth bathrobe, a garment Welles was known to favor while working on set. Parade around the house in your elegant robe, tricking citizens into buying into alien invasions and reshaping the face of cinema. You’re a classic.

Great Kitten, World’s First Cat Cinema
The elevator pitch: In eastern Asia, “cat cafes”, which are cafes full of cats, have recently grown in popularity. Clearly the greatest idea of all time, this concept has now been transposed to the movie theater, so that Londoners might enjoy a warm lap-sit from a feline friend as they watch the newest releases. I have no scientific evidence to substantiate this claim, but I’m developing a theory that rhythmically stroking a cat frees up the brain to focus more intently on the film at hand.
Budget: £50,000
Runs until: June 4, 2015
“Shut Up And Take My Money” factor: I thought this column had peaked in its first week, when we learned of a documentary chronicling life on Cat Island, an island full of cats. I didn’t dare to dream we’d ever exceed the levels of kitty wonderfulness, but here we are. Cat movie theaters are now all I want from this wretched life. Why are we still using non-cat movie theaters?
Most rewarding reward: In exchange for a donation of £100, Great Kitten will allow donors to curate their own season of film programming, from movie selections down to the advertising. Here’s a freebie for anyone in Britain interested in pursuing this: Hausu, Blind Woman’s Curse, Inside Llewyn Davis, and, of course, A Talking Cat!?!