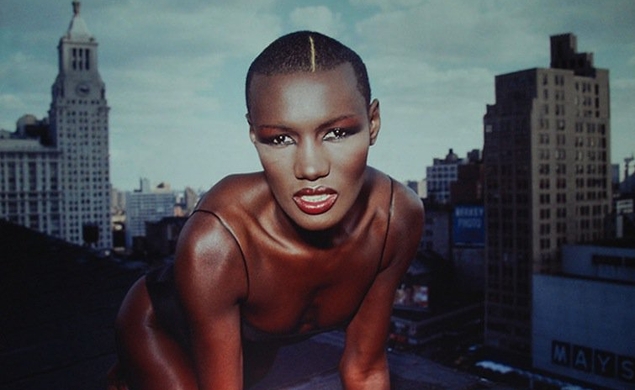 Grace Jones didn’t just perform New Wave music—she embodied the genre in all its garish, tacky, androgynous, explosive splendor. A preeminent icon of the disco era and frequent visitor to Studio 54, Jones cultivated the image of a post-modern Amazonian warrior-artist. Her sexuality was designed to threaten as much as titillate. It’s telling that Jones’ most notable on-screen performance—a performance so big it damn near swallows up the meek little movie that can barely contain it—is as a model who terrifies a womanizer played by Eddie Murphy, who is used to being the dominant figure.

But there was a whole lot more to her life and career than stealing Eddie Murphy’s attempt to re-create himself as a suave leading man. She was a pioneering model and artist whose music transcended genres, as well as the villain in the poorly received vampire comedy Vamp—another role that called on her unique combination of sexy and terrifying—and A View To A Kill, which also featured then-boyfriend Dolph Lundgren.

Yes, Jones has lived the kind of outrageous, larger-than-life existence that people make movies about. So it is fitting that the BBC will be releasing a documentary on Jones, titled Grace Jones—The Musical Of My Life. The doc has already been in development for seven years, and will be directed by Sophie Fiennes. Billboard describes it as “ a cinematic journey into the private and public worlds of Grace Jones, mixing intimate personal footage with unique staged musical sequences.”

Jones has always embraced a theatricality to rival 1970s-era David Bowie, so it makes sense that a documentary about her life would deviate from the norm as well. Fiennes is the sister of actors Ralph and Joseph, as well as a filmmaker whose resume includes The Pervert’s Guide To Ideology, a documentary about philosopher Slavoj Zizek, who is every bit as larger-than-life as Jones, albeit in a slightly different way.